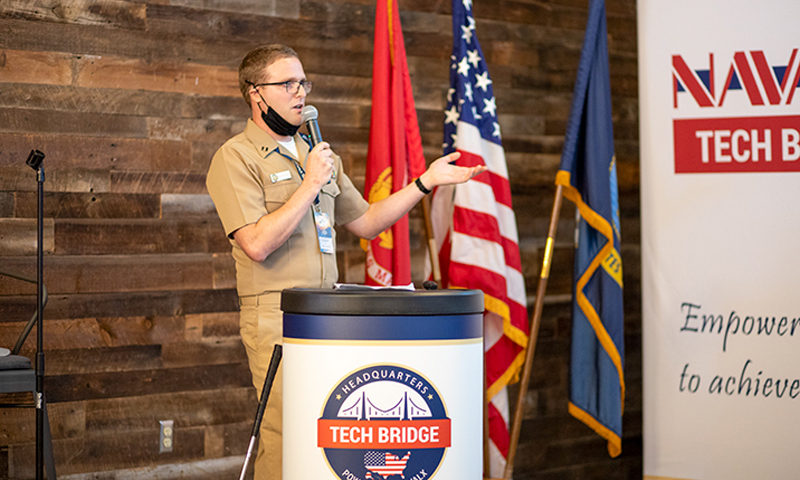 NPS mechanical engineering student Lt. Sam Royster presents his pitch on underwater ship-cleaning robots during the NavalX Agility Summit Challenge, Sept. 16. One of four NPS teams in the finals, Royster took the spot in the competition as has been presented with a research award of $100,000 to further refine his idea.

A field of 200 participants from across the Navy stepped forward to be a force for innovation in the sea services through the NavalX Agility Summit Challenge, part of NaxalX’s annual Agility Summit.

The Office of Naval Research (ONR) and NavalX partnered with the Naval Junior Officer Counsel (NJOC) to design and execute the 2021 Agility Summit Challenge, a two-month long sprint to crowdsource innovative ideas from the deckplates in response to four key challenge areas directly supporting the Department of the Navy’s Unmanned Campaign Framework … Operator Experience, Operator Training, Logistics Support, and Common Data Standards. Overall, the core purpose of this year’s challenge is to gather, present and refine ideas, methods and capabilities that will contribute to making unmanned systems a trusted and sustainable part of the Naval force.

As a hub of Naval research and innovation, with a community of naval officers/graduate students who understand fleet challenges and are actively researching innovative ways to solve them, it’s no wonder four of the six Agility Summit Challenge finalist teams were from the Naval Postgraduate School (NPS).

The final round of the NavalX Challenge was held Sept. 14-17, in person in Virginia and virtually around the Fleet, with the final presentations broadcast live via NavalX’s YouTube channel. These final few days were the culmination of a lot of hard work … Two months of idea sourcing leading up to the live summit event where top challengers from the first stage participated in several pitch-developing rehearsals.

When the dust settled, it was the fourth NPS team, a solo student force of one from the university’s mechanical engineering program, U.S. Navy Lt. Sam Royster, who took top honors in the Agility Summit Challenge competition. While pursuing his mechanical engineering degree, Royster’s focus on robotic controls and total ship systems engineering led his research toward developing a 21st century solution to marine biofouling management. He’s exploring innovative methods of cleaning algae and barnacles off ship hulls to make them more fuel efficient when underway, and reduce their maintenance burden during in-port periods.

It was this research that he pitched to the Logistics Support portion of the Agility Summit Challenge, which focused on using autonomy to ease the burden on supply chains.

“One of the most effective ways of easing that burden is to reduce the amount of supplies needed in the first place,” explained Royster. “Experts have estimated that a 10-20 percent increase in ship fuel efficiency could be achieved if hull fouling levels were kept to a minimum, which would facilitate an extension of underway replenishment timelines, easing the burden the fuel supply chain.”

Royster likened the challenge of marine biofouling to playing golf on a course that hasn’t been mowed in months. The longer you put it off, the worse it gets and the harder it is to get the course into playing shape.

“The same paradigm exists in the realm of hull husbandry,” he said. “If we changed the way we clean our ships so that it happens every week or two instead of once or twice a year, we could save fuel, reduce our environmental impact, and extend the useful life of our hull coatings by up to two years. This innovative hull husbandry CONOPS could be enabled by ‘Roomba-like’ autonomous underwater vehicles that remove marine biofouling when it is just a soft slime layer, and it could ultimately reduce the number of drydocks needed to support our growing and aging fleet, and free up our highly trained divers to perform more emergent repair and salvage work.”

Royster credits his thesis advisor, Dept. of Mechanical and Aerospace Engineering Research Asst. Professor Jake Didoszak, for helping him refine his research ideas into a cohesive and impactful project. Didoszak is a retired Surface Warfare Officer currently serving as in Engineering Duty Officer in the Naval Reserves. He completed his master and Ph.D. degrees at NPS and currently manages the university’s Total Ship Systems Engineering program.

As a result of his win and the subsequent research award of $100,000 to further pursue the work, Royster and Didoszak are currently exploring partnerships with the Naval Research Enterprise on appropriate next steps.

“There are some exciting possibilities to move autonomous hull husbandry and proactive grooming closer to a fleet reality with this funding,” Royster stated. “Professor Didoszak and I are looking at either conducting a proof of concept, temperature-based grooming frequency study that will build off of my thesis research, or working with a leader and existing ONR partner in the field of autonomous hull husbandry to further refine the vehicle and brush design to operate on unique U.S. Navy warship geometries and surfaces.”

“From the characterization of material performance in hull coatings exposed to varied ocean biome, to the modeling of mechanics involved in cleaning uniquely shaped hull surfaces, the marine environment brings many interesting interdisciplinary challenges,” added Didoszak. “This award provides further opportunities for NPS engineering students like Lt. Royster to team with leading researchers in further developing innovative concepts like his for the application of autonomy in tackling Navy relevant challenges such as those in ships husbandry.”

As a campus that supports and fosters innovative thought in its students, it’s no surprise that NPS had such a strong showing in the final round. Royster’s idea to utilize unmanned systems to eliminate biofouling did not begin with the NavalX Challenge. Rather, it began last fall in the university’s Innovation Leadership course taught by Dr. Peter Denning and retired Marine Corps Col. Todd Lyons. Royster also had the advantage of further refining this idea and his pitch by participating in NPS’ annual Big Ideas Exchange (BIX) this past Spring. The BIX is an annual event showcasing select innovative ideas of merit developed by university students as they explore critical issues within the sea services.

Royster actively credits the course, the coaching, and the BIX with putting him into a position of competitiveness to eventually win the NavalX Challenge championship.

“The course and BIX are having a high impact because we can produce leaders like Sam [Royster] who are making a difference for the Navy,” said Denning. “Many other graduates of our program have gone on to be innovation leaders as well … In other words, not only is Sam making a big impact, NPS’ education program in innovation leadership is having a big impact by developing leaders like Sam across the DOD.”

“Participating in the Big Ideas Exchange was essential in that it taught me how to give an effective pitch,” he said. “So when I heard about the opportunity to pitch my idea to a different audience at the Agility Summit and potentially win research money, I was all in.”

Royster said the best part about NPS is the freedom it provides students to pursue solutions to key challenges they see in the operational Fleet.

“My experience at NPS has been great,” he said. “I’ve enjoyed the autonomy to pick my classes and focus on things that not only interest me but also make real improvements in the Navy … Coming here and being able to focus on my education for the last two years has been an awesome opportunity.”