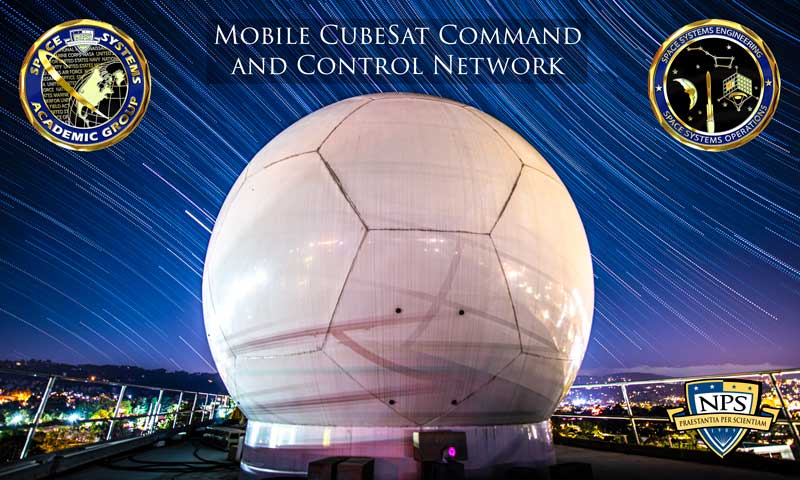 Nearly 10 years old, the MC3 has become a multi-national network, and was conceived as a means to bring together organizations that have developed their own CubeSat programs with a single community-based approach that focuses on standard infrastructure that many across the government could utilize over time. NPS’ Space Systems Academic Group was tapped to execute the construction, maintenance, and operation of the network given its strengths in CubeSat-related activities and its focus on hands-on military education.

The network has eight active sites, with a ninth under construction, located at military, educational and commercial institutions. The network enables a low-cost, fast-paced development environment in which satellite and ground infrastructure technology can be matured without the burden of potentially impacting high-value missions that are critical to national security.

The growth of the network and its capabilities are commensurate with the challenges presented by its expansion. The four students are looking to inverse the challenges of growth into capabilities with their respective thesis projects, which focused on autonomy within the systems, to integration of hardware and software.

“The students contributed polished, reasonably-scoped capabilities that strengthen the network,” said Dr. Giovanni Minelli, NPS Space Systems Academic Group (SSAG) Faculty Research Associate. “Without our thesis students producing measurably useful deliverables, the small teams of faculty and staff researchers would not be able to give these new development efforts the attention they require given the work involved with keeping the network operational for our on-orbit users. The thesis work often leads to interesting follow-on work that can be picked up by a future student or can flow its way into other groups around the DoD.”

“It’s a way of monitoring these geographically-dispersed ground stations autonomously,” said Marczewski. “The goal here is predicting errors or faults that may cause a pass, referring to a satellite passing over where data communications between the ground station and that satellite does not happen, due to something that we did not identify before that pass happened.”

Using the sensors, Marczewski looked at data set clusters for time of day and temperature within the ground station satellite dome to get an idea of what ‘normal’ looks like and allows users to see if normal conditions are drifting and address any potential errors.

Staying in the realm of autonomy, another student’s thesis looked to develop software to autonomously characterize an antenna’s sensitivity to receive signals from space. The sun produces a substantial amount of radio signals in the band range used by the MC3 stations. The developed algorithms can record the intensity of these readings, and when comparing them to a sun-free baseline, can extract the instantaneous antenna sensitivity. By repeating this process daily, degradation or sudden anomalies can be identified autonomously. These measurements are currently conducted manually, only once or twice per year when personnel are on site performing maintenance.

As important as the ground stations are to the MC3 network, the equipment in orbit can also make or break the efficacy of the overall network. U.S. Navy Lt. Allyson Claybaugh used her thesis to verify end-to-end compatibility between an MC3 ground station and the NPS-developed CubeSat's X-band Software-Defined Radio (SDR), a payload designed and constructed through previous thesis research. The testing pursued in her study aimed to find the required parameters, and associated software configurations, to achieve mission-ready interoperability between the payload SDR and commercial SDR receivers at the NPS MC3 ground station.

“X-band SDRs offer enticing features such as greater bandwidth, higher data rates, advanced modulation schemes and increased resiliency against environmental interference such as attenuation,” noted Claybaugh. “A proven CubeSat form factor is leading to increasingly ambitious payloads and mission requirements, resulting in more data products and the subsequent need for higher space-to-ground data transmission rates. Through the MC3 X-band initiative and CubeSat project, the SSAG is developing infrastructure that responds to this emerging need of the small satellite community.”

Instead of focusing on one aspect of the overall network, U.S. Navy Lt. Anastasia Novosyolovablatt is working to integrate hardware and software to simulate the entire communications path of an upcoming CubeSat mission. This communications path consists of ground software that operates the vehicle, the spacecraft itself with its communications system, and a payload currently undergoing development in New Zealand. The testbed, called FlatSatNet, is able to connect to the payload in New Zealand from NPS to afford the mission’s software developers the chance to develop software interfaces before the flight payload is sent to NPS for integration into the satellite.

“This helps reduce risk for the mission and sets the precedent that concurrent development can occur across oceans to maximize collaboration between allied government small satellite programs,” stated Minelli. “The FlatSatNet concept allows us to test the entire mission’s communications architecture, including components developed internationally, before we launch the satellite into orbit.”

As spaceflight missions have a degree of uncertainty to them, Minelli also noted the SSAG scopes projects so that the students are not dependent on the outcome of an experiment or mission that is beyond their control. This way, they ensure that these types of results are the “cherry on top” of an otherwise strong theoretical or experimental topic.

“I believe the hands-on, comprehensive, project-oriented education we are receiving in the Space Systems curriculum at NPS is one of the most top-notch space educations out there,” added Claybaugh. “The support I've received from my thesis advisors, as well as instruction and interaction with experienced professors — it's truly special and will set me up for my next tour, as well as the future career in the space field.”