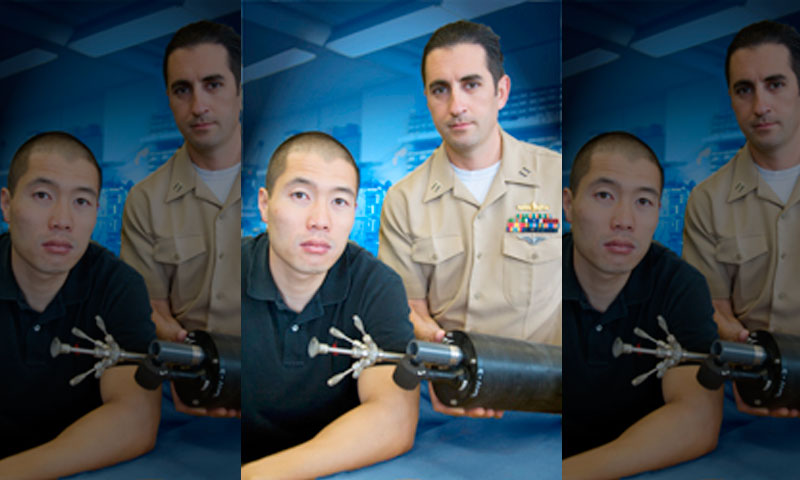 Schmidt and Suh represented the Naval Postgraduate School in what is NPS’ third round of student involvement in the exercises over the past six years. Schmidt and Suh used sensors and sonar to essentially map out the underwater upside-down ice “mountains,” known as keels, that form beneath the surface. They hoped to determine what impact, if any, those keels have on the ocean-ice interaction that leads to melting Arctic ice.

“We found a large underwater ice feature,” explained Schmidt, “and we used sonar to map it out and create a 3D image of the bottom of the ice. As the wind blows and moves the ice around, we are hoping to determine if those large underwater keels create enough turbulence to cause mixing, and if that contributes to the decrease in multi-year ice.”

Schmidt and Suh joined the ICEX camp, drilling into the ice to place their equipment in a way that would provide the data necessary to answer their questions. In ice approximately five feet thick, the pair used a device called an ocean flux package, developed in Oceanography Research Professor Tim Stanton’s Ocean Turbulence Group, to collect data in addition to sonar scans over the ten-day period.

“If the decrease in ice is significant, can we quantify it and put it into models?” Suh noted. “If so, we could make better predictions of the Arctic conditions to hopefully enable planners and policy makers to make better decisions for future ventures up there.”

That data will later be sorted and evaluated, and used by Schmidt in his thesis. He is scheduled to graduate in March 2012. Suh graduated from NPS in March of this year, and will go on to work at the Stennis Space Center as part of the Fleet Survey Team.

Their theses projects will help the Navy build a more comprehensive picture of the conditions in the Arctic, a region that is largely part of the maritime domain, and increasingly so as the ice layers melt.

ICEX 2011, which utilized the USS New Hampshire and the USS Connecticut for submarine field experiments, brought out Secretary of the Navy Ray Mabus, a strong supporter of research and graduate education. 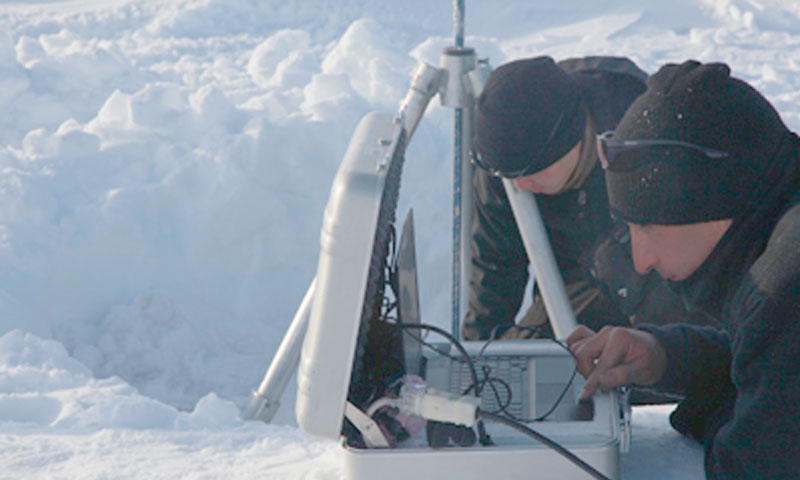 NPS students from left to right, Lt. George Suh and Lt. Brandon Schmidt scan an ice keel using sonar during their ten-day research trip to the Arctic. The trip, sponsored by the Office of Naval Research, was part of the Navy’s Ice Exercise 2011.

The opportunity to travel to the Arctic, a trip that was sponsored by the Office of Naval Research, was one that Suh and Schmidt couldn’t pass up, and they were among a handful of students who applied for the exercise. Stanton worked with the students to develop the right kind of problem for the Arctic, and to find an issue that would benefit the Navy.

It’s just an extraordinary experience and all of my students that have done this just remember it for the rest of their lives,” said Stanton. “It’s real problem solving, but not toy problems. These are very relevant and have to be tailored to something that two students can do. I feel we are good at that. We are getting the right kind of equipment, and the right kind of problems for them to come home and write up a terrific thesis on.

“With Oceanography, we have all of our students do a real field project now,” he continued. “And it’s really satisfying to see because the students get to take part in the planning and execution of the analysis. And that requires them to use problem solving skills also. So we are very pleased with how the project turned out.”