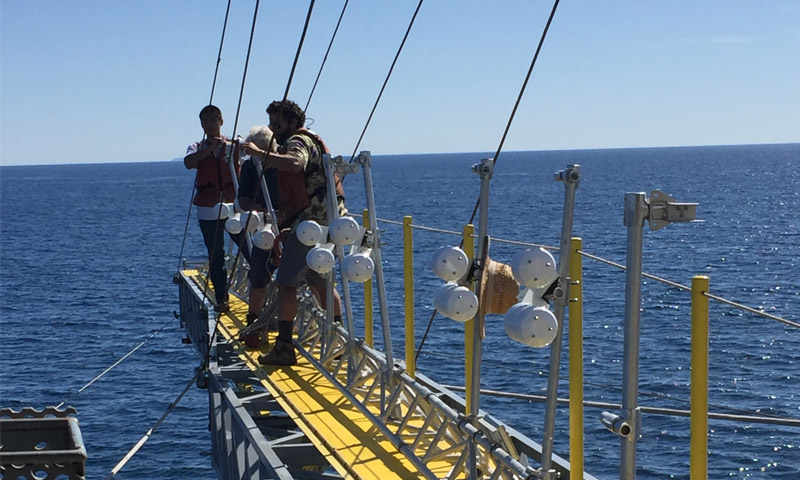 Nature doesn’t care if humans get physics laws right, but understanding how the world works helps people properly interact with nature. So when Naval Postgraduate School (NPS) Research Assistant Professor David Ortiz-Suslow stumbled across a discrepancy in the distribution of kinetic energy of the air movement above the ocean surface that didn’t agree with Kolmogorov’s widely known and accepted -5/3 power law, he knew he had to investigate this further.

“We found that in general the Kolmogorov’s power law holds as it is thought of, but there are conditions and specifically when you get really close to the [ocean] surface, it seems to systematically break down, which was the unexpected part,” Ortiz-Suslow explained.

At the time, Ortiz-Suslow was a post-doctoral researcher for Dr. Qing Wang, NPS Professor of Meteorology and Principal Investigator for the Coupled Air Sea Processes and Electromagnetic Ducting Research (CASPER) project. The findings, published in Geophysical Research Letters in late 2019, carry implications for understanding the energy balance and exchange at the atmosphere-ocean boundary.

“This result may rock the boat,” Wang says.

The project began in Fall 2017 off the Santa Monica coast on a unique oceanographic research vessel called the Floating Instrument Platform, also known as FLIP. FLIP is a specialized oceanographic research vessel that looks like an ocean transport ship permanently in the midst of capsizing. Owned by the Office of Naval Research (ONR) and operated by the Marine Physical Laboratory at Scripps Institute of Oceanography, the 355-foot-long research platform tips itself over and bobs in the water, but unlike buoys, which are commonly used to collect air-sea data around the globe, FLIP is specifically designed to be very stable and practically immune to wave motion, yielding far better data.

As one of Wang’s postdocs, Ortiz-Suslow was part of an NPS-led study (Coupled Air Sea Process and Electromagnetic Ducting Research or CASPER), funded by ONR, that looked into how air-sea interactions effects electromagnetic energy propagation over the ocean. Wang focuses on this research topic because radar detection and communication and high energy laser weapons performance are heavily dependent on air-sea environmental factors. Two other team members, Ryan Yamaguchi and Alex Olson were also aboard the FLIP and Yamaguchi was the key person in designing the NPS measurements on FLIP.

Ortiz-Suslow, Wang, Yamaguchi and Olson spent a month on FLIP along with its crew members and other scientists from participating institutions. FLIP was towed away from the coast and “flipped” before measuring instruments were attached to the platform’s three arms. The whole process was arduous, yet exciting.

“When you have a platform that’s designed like this for this particular use, the science you can get out of it is very robust and the insight you can get is, in my view, amazing,” Ortiz-Suslow says. “It was a very special experience to be involved in a FLIP cruise. It was probably one of the more treasured experiences of my career to this point.”

After the trip, Ortiz-Suslow was conducting routine data quality control when he noticed some strange signals in the data from the ultrasonic wind sensors. He decided he had to look further into it, creating an algorithm to organize the data so he could analyze it systematically. He wanted to make sure it was a natural phenomenon, not just sensors acting up. Sure enough, he found that the sensors were operating fine, but that they captured a phenomenon a 70-year-old physics law could not explain. 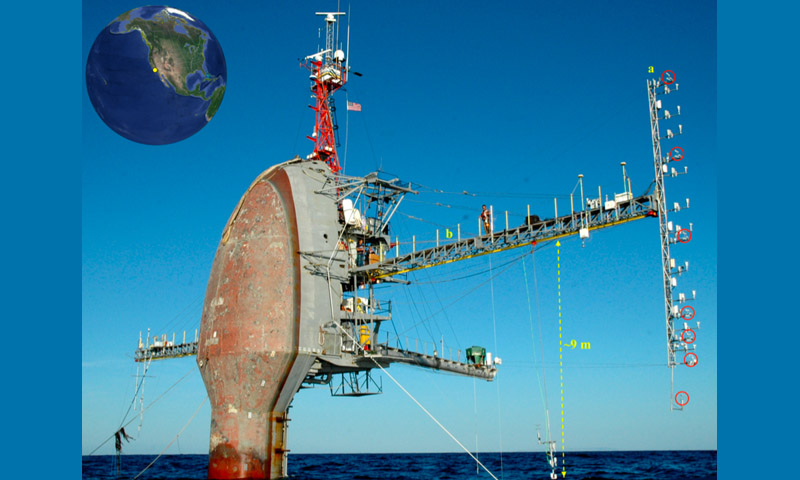 The Floating Instrument Platform (FLIP) as set-up for the CASPER project, with the sensors used in the study highlighted with red circles. FLIP’s location during the cruise is marked on the globe in the upper-left. (Photo by: Ryan Yamaguchi, Alex Olson of NPS is standing on FLIP's arm; screenshot from An Evaluation of Kolmogorov’s -5/3 Power Law Observed Within the Turbulent Airflow Above the Ocean)

Imagine being in a pool and moving your hands through the water. The water responds to your hands pushing through it by forming little whirlpools as it replaces where your hand used to be. This is a common response of any fluid whose motion is interrupted by a solid force. But how do large scale fluid motions produce these small whirls and eddies that eventually dissipate at the molecular level? This phenomenon is prevalent in almost any fairly dynamic fluid and predicting this behavior is central to studying fluid physics.

These questions stumped fluid scientists for a long time because there didn’t seem to be a straight-forward means for constraining, mathematically, a fluid’s turbulent fluxes. But in 1941, the Russian mathematician Andrey Kolmogorov, building upon earlier work by others, developed an elegant formula that proposed to universally predict the transfer of turbulent energy between eddies of different sizes. His theory, commonly referred to as the -5/3 Power Law ( ) became widely accepted as a pillar of fluid mechanics theory.

“You should always be suspicious of a value that’s a nice, perfect fraction,” Ortiz-Suslow says.

Yet, turbulence is a very complex process to understand, so any reference quantity that can be used to check observed turbulence is of great value to scientists who venture out and try to measure turbulent processes. While limits have been established for Kolmogorov’s law over the years, Ortiz-Suslow’s finding that doesn’t hold water in the marine atmospheric boundary layer was startling.

Kolmogorov’s law predicts that if both the constant  and the energy loss rate of the turbulent fluid ( ) are constant for a given condition then the energy (E) is only controlled by the scale of turbulence (k) raised to the -5/3 power. To analyze the data from FLIP, Ortiz-Suslow developed an algorithm (ARIIS) to allow him to obtain the spectral slope objectively and automatically to allow processing of a large amount of data, which turned the Kolmogorov power into a variable (m) so they could see if their results converged on -5/3.

“Our method basically scans all our data from those ultrasonic wind sensors, looks at the observed energy spectrum and determines what m is in the real atmosphere,” Ortiz-Suslow explains.

If Kolmogorov’s law were valid in all conditions, m should cluster around -5/3, but, in fact, that’s not what they found. For the data close to the ocean surface, m clustered around a new value around 20 to 30 percent larger than -5/3 (closer to zero). Whereas, data from far away from the surface clustered around Kolmogorov’s value. Unexpectedly, Ortiz-Suslow found that m changed with wind speed and thermal heating causing deviations from Kolmogorov’s -5/3. This variation of the slope with environmental conditions was not accounted for in the original theory and had not been documented before over the ocean. Among other things, this suggested to Ortiz-Suslow and Wang that ocean waves are directly impacting the distribution of turbulence energy within the atmosphere.

“If it had been basically a cloud of data [showing no trend with any physical parameters], that would not be that interesting,” Ortiz-Suslow explains. “But the fact that the cloud showed dependence on the physical forcing of the system is what was interesting.”

The team worked as carefully as they could during the study to alleviate as much opportunity for error as possible, knowing how big of an impact this result could have on various scientific communities. They feel that their results warrant future study from fellow researchers to further explore the physics and its impacts.

But now that the team has evidence Kolmogorov’s Law breaks down at the air-sea boundary, some next questions arise: What variable is manipulating fluid turbulence in this boundary layer? How can scientists predict air-sea energy balance without the Kolmogorov power law? How will this impact models and studies that currently rely on the theoretical power law?

After finishing his postdoc studies, Ortiz-Suslow was hired as a research assistant professor in the NPS Meteorology Department where he will work to answer some of these questions. Wang, meanwhile, grapples with their findings’ implications on high energy laser research. She’s already presented the results in a workshop in Germany where a group of scientists working on laser propagation through the atmosphere discussed alternative approaches in dealing with atmospheric scintillation effects when Kolmogorov’s law fails. It may take a while for her and her fellow researchers to find a viable alternative, but they know this is the direction of future research because it may change our current estimates of the impact of environmental factors to laser weapons.

“The hope is if we understand the underlying physics better, we can come up with a more guided, new development for the propagation of high energy lasers,” Wang says. 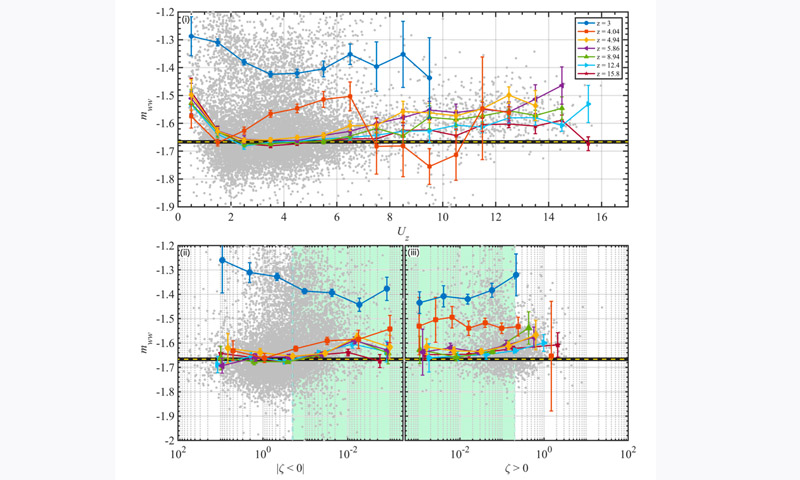 The grey cloud of m data points shows the measured power deviating from Kolmogorov’s -5/3 power law. (Screenshot from An Evaluation of Kolmogorov’s -5/3 Power Law Observed Within the Turbulent Airflow Above the Ocean)