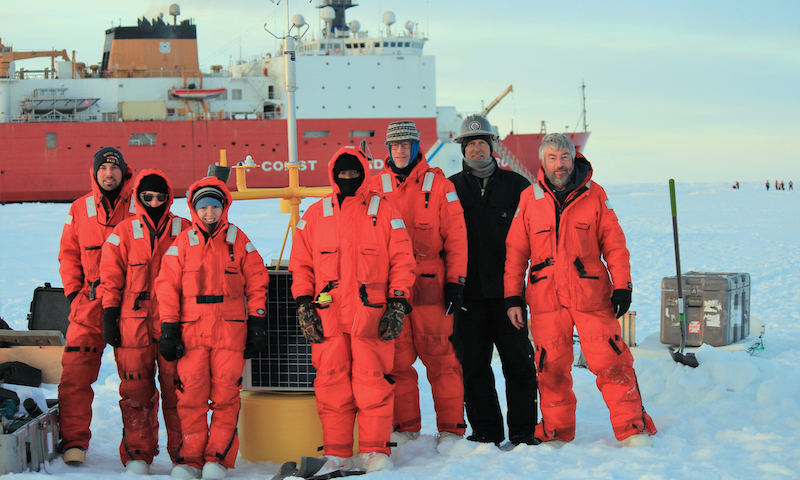 A group of researchers, including NPS scientists and students, are pictured during an Arctic expedition to deploy observation buoys in the eastern Beaufort Sea. The Office of Naval Research funded program will examine how changes in Arctic sea ice growth and retreat effect the sea, the greater Arctic region, and its acoustic environment.

Naval Postgraduate School (NPS) scientists and students just returned from the heart of the desolate Arctic on an expedition which will deepen our understanding of a rapidly retreating northern ice pack.

The arduous, five-week voyage aboard the polar icebreaker USCGC Healy (WAGB-20), the Coast Guard’s largest and most technologically-advanced research vessel, forged deep into the volatile sea ice of the eastern Beaufort Sea to deploy a series of NPS-developed Autonomous Ocean Flux Buoys (AOFB), which will continuously monitor the delicate balance between ocean, ice and sun.

“We are studying the changes in density gradients in the upper ocean that are contributing to the massive late summer ice retreat we now see in the central Arctic,” explained Tim Stanton, NPS oceanography professor emeritus. “A decade ago, by late summer, there was a 500-mile strip of open water near the Alaskan and Canadian coasts, whereas now there is four to six times this area of open water by the end of summer.”

The U.S. Navy recognizes the geopolitical ramifications of these changes, which open a range of shipping and mineral exploration possibilities, and recently re-established a high latitude research program through the Office of Naval Research (ONR) to better predict how, when and why the perennial ice pack will shift form.

This five-year research initiative - Stratified Ocean Dynamics of the Arctic (SODA) - will provide a more granular understanding of how underwater conditions impact the ice in the Beaufort and Chukchi Seas as changing heat flows move and mix through the upper stratification of the water.

The NPS team, along with five other groups, set sail September 14 from Dutch Harbor in the Aleutian Islands for the 35-day mission.

“Our basic research is directed at improving coupled ocean models of this ice retreat by identifying physical processes not currently in the regional numerical models to improve their prediction skills,” Stanton said.

“This project is looking further down in the water column using additional instrumentation on our AOFBs to understand how the increased flow of Pacific water into the Arctic is contributing to melting the ice pack,” he added. “Heat is trapped in the salinity density gradients, so we are measuring processes that allow this heat to travel up to the surface mixed layer, where it can melt ice.”

The strategically placed AOFBs will provide visibility on this process over time.

The data the buoys collect will be transmitted twice daily via satellite back to researchers at NPS, allowing them to track turbulence fluxes of water movement, heat and salt below the ice over the long term.

“We hope to quantify how changes in the Arctic system in general, and in declining ice cover in particular, are affecting the physical environment within the Arctic Ocean,” Shaw said. “For example, do increasing areas of open water enhance the exchange of energy and heat between ocean and atmosphere?”

The AOFBs consist of two main components: a surface buoy that nestles on the ice and an instrument package which probes the depths below by a series of poles descending from the buoy.

The buoy houses a GPS processing electronics that calculate position and ice velocity; an Iridium antennae; and batteries which sustain a longevity of the system for two years. The instrument package also includes a downward looking 300 kHz Acoustic Doppler Current Profiler and a custom-built flux package.

“We will monitor the inbound data streams every day and adjust the sampling scheme in response to events such as strong storms while keeping within our limited power budget,” Stanton said. “The graduate students will be looking at different aspects of the data set as it comes in, while also receiving and processing satellite imagery of the area to complete their thesis projects.”

Traveling to the Arctic on this project provides the graduate students with invaluable experience as they embark on their own careers.

While their NPS coursework in Meteorology and Oceanography lays a solid foundation in the mathematics and physics necessary to investigate the underlying processes contributing to the significant polar ice melt rates, participating in the Arctic expedition gives them the chance to cut their teeth in the field.

“I gained a better understanding of how heat and freshwater distribution in the Arctic Ocean relate to the transfer of buoyancy and momentum between the atmosphere, ice and upper ocean,” Green said.

“The SODA project provided me the opportunity to meet, learn and form lasting relationships with some of the leading scientists in the field of polar oceanography,” he continued. “Being under the advisement of Professor Stanton and Bill Shaw coupled with this experience and the prospective data sets from the AOFB have afforded me the opportunity to produce a thesis worthy of publishing.”

The expedition was a resounding success, Stanton said, and the team is now setting their sights on receiving the data.

“Completing a deployment is rewarding, and so is using the new observations to help answer questions about the Arctic system,” Shaw said. “Our participation in the program shows that NPS is at the leading edge of physical oceanography research in the Arctic.”