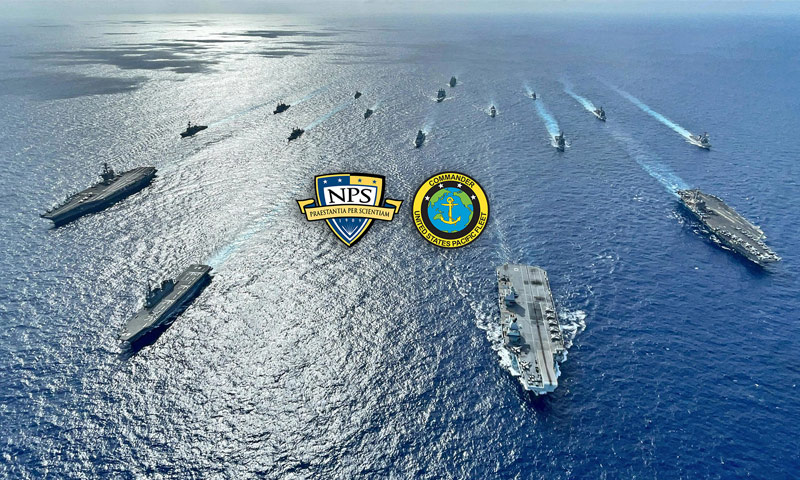 The Naval Postgraduate School (NPS) and U.S. Pacific Fleet announced the establishment of the Nimitz Research Group, Feb. 16. Under the aegis of NPS’ Naval Warfare Studies Institute, the new organization will leverage NPS’ interdisciplinary education and research capabilities and institutional knowledge in new ways to meet the needs and emerging challenges of the Pacific Fleet.

The Naval Postgraduate School (NPS) and Commander, U.S. Pacific Fleet (PACFLT) are joining forces to establish the Nimitz Research Group, an organization which will leverage NPS’ educational and research capabilities and institutional knowledge to meet the needs of the Pacific Fleet.

Created under the aegis of NPS’ Naval Warfare Studies Institute (NWSI), the Nimitz Research Group will consist of NPS faculty and students who will serve as an extension of the PACFLT staff in Hawaii, participating in fleet exercises and events and providing additional research capacity and subject matter expertise.

The launch of the Nimitz Research Group was announced on Feb. 16 by the president of NPS, retired Vice Adm. Ann E. Rondeau, and Adm. Samuel Paparo, Commander, PACFLT.

“The establishment of the Nimitz Research Group marks a further evolution in our outstanding partnership with the U.S. Pacific Fleet,” said Rondeau. “We have always seen NPS as a center of excellence and innovation, a place where our faculty and students work together to solve the operational challenges of our fleet and force. Through the Nimitz Research Group, we will be able to provide those solutions by deploying our talent and our experience in direct support of our Pacific Fleet partners.”

The Nimitz Research Group is modeled after NWSI’s Bucklew Research Group, which already provides similar support to Naval Special Warfare (NSW) through studies and research by Navy SEAL officers attending NPS on a two-year master’s degree program. Bucklew scholars serve as an extension of NSW Group commands, who in turn benefit from the SEALs’ education, research efforts, interactions with the academic community, and proximity to Silicon Valley.

During a meeting with academic and industry leaders at NPS in October 2021, Paparo – a graduate of NPS’ Systems Analysis program – expressed a desire to similarly leverage the unique capabilities of NPS to support COMPACFLT’s priorities and research needs. Paparo recognized the value of utilizing the deep expertise of NPS faculty members as well as the operational experience of NPS’ 2,500 mid-career officers, senior non-commissioned officers and civilians.

The example set by the Bucklew Research Group proved to be an ideal model for PACFLT’s requirements. As a result, the Nimitz Research Group was conceived with the goal of providing coherence and unity of action for NPS’ support to PACFLT.

“The Nimitz Research Group links the intellectual rigor of NPS, its key location in the nation’s hub of technical innovation and the expertise of innovative warfighters in the Pacific Fleet to research, develop and implement new and dynamic combat capabilities,” said Paparo. “Together we will build critical advantages over our competitors to maximize our strengths – battlespace awareness, agility, maneuverability and collective capabilities of the joint forces.”

According to U.S. Marine Corps Col. Randy Pugh, deputy director of NWSI, the main idea behind the Nimitz Research Group is its multi-disciplinary nature. As the group consists of members from all services, warfare communities and academic programs, every problem is analyzed and solved using many different lenses and with a tremendous wealth and diversity of experiences and expertise.

“As a result, you end up with a really rich and well-informed solution to a particular problem,” Pugh said. “The general theme is that this is not just the collective activity of individuals, but rather a whole which is very much greater than the sum of its parts.”