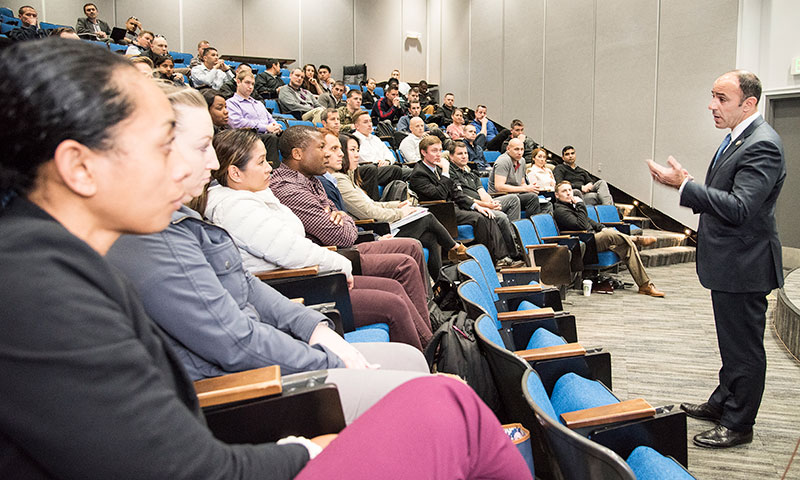 Rep. Jimmy Panetta of California's 20th Congressional District speaks to a packed house of students and faculty from NPS’ Graduate School of Business and Public Policy (GSBPP) during a guest lecture on campus, Feb. 23.

Rep. Jimmy Panetta of California's 20th Congressional District speaks to a group of NPS students from NPS’ Graduate School of Business and Public Policy (GSBPP) in Ingersoll Hall, Feb. 23. Panetta was invited by the business school to offer perspective on the political process and the development of policy following his first full year in the U.S. Congress.

Motivated by the opportunity to stay in touch with some of his constituents, Panetta expressed his own perspective on the importance of the DOD on the Monterey Peninsula. In addition to the county’s robust agricultural industry, he said, the long list of military installations throughout the region represents a hub for higher education for national security.

“It was great to speak with students, including many officers, at the Naval Postgraduate School. We talked about the federal budget and what's going on in Washington. I also spoke with them about what I am doing to support NPS and our district's many other military entities that educate and foster leadership skills of men and women in uniform,” Panetta wrote via Twitter following the meeting.

GSBPP Assistant Professor Ryan Sullivan extended the invitation to Panetta, and said the lecture was a great opportunity to connect what he teaches in his course to the perspective of a youthful congressman in our nation’s capital.

“The class I teach this quarter is on budgeting policy, and we spend quite a bit of time discussing the political process and how it relates to resource allocation in defense, and in the U.S. government in general,” Sullivan explained. “I thought Representative Panetta did a superb job in relating his personal experiences in Washington with the topics we discuss in the classroom.

“I noticed he spent a substantial amount of time discussing personal relationships in Congress, and how they drive a lot of policy decisions. Maybe I thought he would be a little more partisan than he was, given the current climate in Washington, but as it turns out, he was quite the opposite,” Sullivan continued.

Panetta shared a vignette on building consensus and trust among his colleagues prior to approaching Minority Leader Nancy Pelosi for a position on the Armed Services Committee. He said when it came time to request the position from her, the groundwork he cultivated with his fellow members was enough to help influence Pelosi’s decision, resulting in him getting the job.

Ultimately, Sullivan says, he couldn’t have asked for a more spirited conversation and student interaction, something he thought was beneficial for both NPS and his students, and for Panetta as well.

“As a student, you are limited in what you can learn from classroom lectures or reading a book, so obtaining first-hand knowledge about the budget process and other pressing issues from a high-profile congressman helps in understanding why certain programs get funded, and why others do not,” Sullivan said.