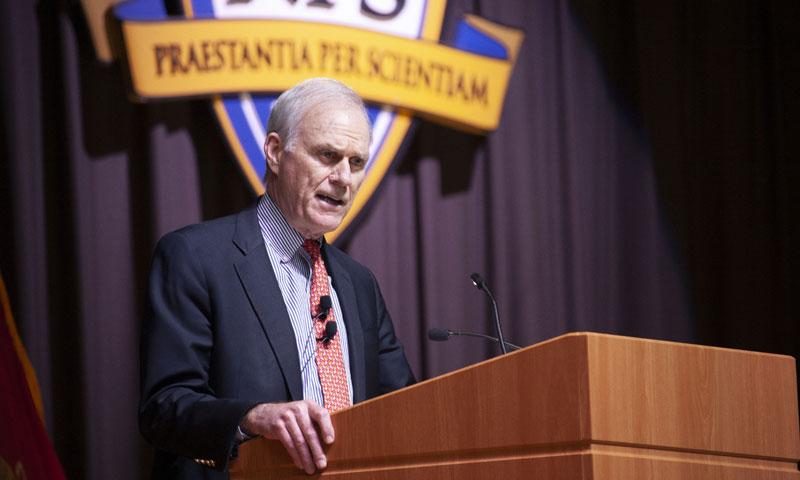 The Naval Postgraduate School (NPS) and the Middlebury Institute of International Studies (MIIS), two institutions focused on global security challenges, furthered their partnership by hosting a day of dialogue on their respective campuses, presenting student research and culminating in a keynote address by Secretary of the Navy Richard V. Spencer Nov. 16.

Titled MIIS/NPS In Dialogue, the event focused on inhibiting the spread and use of nuclear, biological, and chemical weapons. Both MIIS and NPS students presented research on proliferation threats, deterrence, and arms control before dialogue shifted to the NPS campus where Spencer delivered a keynote address on the need for collaboration to solve international security challenges.

“This is only the beginning of an enormously terrific, enduring conversation about the things that affect security not only for the nation but around the globe,” said NPS President retired Vice Adm. Ann Rondeau. “Everything from the environment, to military operations, to cyber, is our obligation to bring our students and faculty together to be part of this national dialogue.”

The genesis of this event, according to Rondeau, was as early as the beginning of her tenure as NPS President which began in January. One of her first acts as President was to establish a strong working relationship with MIIS President Laurie Patton.

“Both of our institutions have been focused on security studies from the beginning, and both are uniquely equipped to address the security challenges of the 21st century,” said Patton. “Together, I think we have no rival in our potential for making a safe and secure world, and our current challenges demand nothing less than this kind of institutional cooperation to share our distinctive strengths and expand the options for our students.

“And this afternoon we saw just that,” she continued. “With our students and faculty cross pollinating about the big questions that need to be discussed.”

Secretary of the Navy Richard V. Spencer offers the keynote address during the inaugural MIIS/NPS In Dialogue in the university’s King Auditorium, Nov. 16. The first event in what will be an ongoing series provided a forum to showcase the two universities mutual areas of expertise and research on global issues.

In December 2018, the Department of the Navy outlined a groundbreaking study and report known as Education for Seapower (E4S), a detailed action list that addresses the changing, sophisticated and complex technological world in which the modern warfighter operates. The wide-ranging report has recognized the Naval Postgraduate School (NPS) as a key player in its efforts to achieve “continuous learning in times of great change.”

NPS’ high-profile military-academic partnerships, such as its partnership with MIIS, is not only an endeavor to achieve some of the goals of the E4S report, but also an endeavor to fulfill Spencer’s vision for NPS to capitalize on the university’s advantageous proximity to peer universities, collaborating at the research level.

“This conference is the exact posterchild of the cooperative learning we need to keep us on the cutting edge in this fast-changing world we have today,” said Spencer in his address. “For the [Department of Defense] to adapt and innovate, we must speak to organizations outside of the natural web of national security. We have to research together.

“We are entering a time of great power competition where Russia and China have become strong adversaries and we must stay ahead and maintain the gap,” Spencer continued. “As a response, we created E4S with the main theme of competing in a horse race of technology.

Spencer went on to say that constant breakthroughs in the new cognitive age, such as artificial intelligence, quantum computing, robotics, autonomous systems and machine learning, are only achievable through the best efforts of our naval education institutions along with our academic partners.

“We need all hands-on-deck, including the whole of government, the private sector and the best minds of the academic world,” he added.

“Where will our gap be?” he continued. “It will be the grey matter [in our heads], not the grey hulls. How we fight the ship, and how we fight the battle is going to be our primary differentiation. This is why one of my top priorities as SECNAV is to promote learning as a core naval advantage, woven into one’s career and how one contributes to the team.”

“Russia and the U.S. are very stable at the nuclear and conventional level but it is at the sub conventional level is where we are seeing the most competition and conflict, which is typical of great power competition,” said Cissell. “MIIS does a lot of great work in the realm of nonproliferation, which made my research a perfect fit for this dialogue.

“Due to this overlap, we were able to approach this from a lot of different perspectives,” she continued.
“The students I met today were really knowledgeable and passionate about these issues, whether it be the security or the technology, so going forward there is a lot of great opportunities for collaboration in research.”

Upon graduation from NPS, Cissell noted that she will be able to reach back and rely on the broad group of connections she has made as she advances forward into the non-proliferation field.

MIIS student Nomsa Ndongwe, a candidate for a Master of Arts in Nonproliferation and Terrorism studies, has served as a diplomat at the Zimbabwe Permanent Mission in Geneva. She brought her unique perspective in her presentation, entitled “Identifying the Pathogen: Reinvigorating the Biological Weapons Convention.”

The focus of Ndongwe’s research looks at updating international guidelines on the use of biological warfare, which were developed in the Cold War era.

“During the 1970s, there was a lot of fear of biological warfare development getting out of hand as a ‘poor man’s nuclear bomb,’ and though they crafted international legislation to curtail the proliferation of biological agents, they did not have any verification mechanism, and that is its greatest lack,” said Ndongwe. “Right now, we are seeing a spike in public health emergencies and infectious diseases spreading in places we have never seen before, so strengthening the biological weapons convention can help mitigate disease.

“But sometimes we have a silo mentality where information and research is not able to reach every single person,” she continued. “Unfortunately for things such as a biological attack or an infectious outbreak, it knows no borders, boundaries or rules. The lesson that we keep relearning is that if you approach things with one method to deal with them, then we will not get to the problems at its root.”

Ndongwe stressed the importance of collaborating with different kinds of people and perspectives, particularly with NPS, for different organizations can look on things through different lenses.

“I found the talk given by Maj. Cissell to be very illuminating in particular,” said Ndongwe. “Coming from an outsider’s perspective, the way I look at international relationships is completely different, and very little exists in black in white, so discussions like this help give you the full picture. We all need to get rid of the kind of thinking where we limit ourselves on other possibilities, that way, we can open up our perspectives and make a huge difference.”

In closing out the event, Spencer relayed the story of former Chief of Naval Operations Adm. Arleigh Burke, who in 1929 studied ordinance at NPS when it was housed at the U.S. Naval Academy and went on to earn a Master’s in Chemical Engineering at the University of Michigan.

“Armed with his combination of both a military and civilian education, Burke brought tactical innovations to the Solomon Islands, the Sea of the Philippines and Leyte Gulf,” said Spencer. “He then planted the seeds of Cold War victory by fathering our nuclear program, our Polaris missile program and the naval use of space.

“It is safe to say the investment in his education payed off,” Spencer continued. “We need to keep investing, to ensure the personnel that serve on the Arleigh Burke-class destroyers that bear his name are prepared, both mentally and intellectually, for the challenges ahead.”

The MIIS/NPS In Dialogue program will continue throughout the upcoming year. Current slated events include a discussion on the “Use of Chemical Weapons in Syria: Lessons in U.S. Policy” on Feb. 4; “Lessons Learned from Organized Crime for Disrupting Illicit Nuclear Procurement Networks” on Feb. 11; and, “The Detention Detectives: Using Technology to Investigate Nuclear and Missile Programs Worldwide” on Mar. 31.