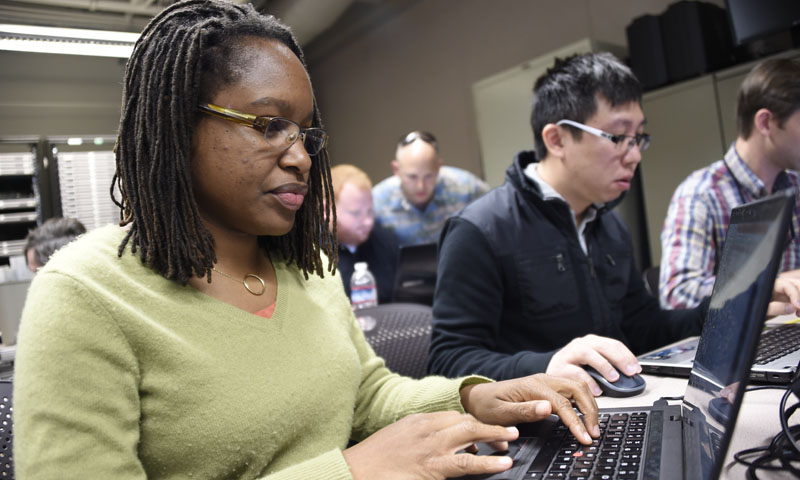 Scholarship for Service Intern Jennifer Johnson, left, participates in a virtual game of capture the flag pitting computer science students from NPS against 60 teams from around the world in NPS’ newly constructed Cyber Battle Lab.

The Cyber Academic Group at the Naval Postgraduate School (NPS) broke in its new high-tech Cyber Battle Lab with an international cyber capture the flag competition that pitted 60 teams from around the world against each other on a virtual battlefield, April 13. The lab provided an unclassified venue for students and researchers to collaborate in the realm of cyber defense and beyond.

“Work on the contract began in July and we are already in the lab,” said Cyber Academic Group Chair Dr. Cynthia Irvine. “The virtual machines and servers have already been in use for several quarters.

“The lab cost under a million dollars to set-up, but the school has already made a significant investment in the servers that make it work. We can run up to 100 virtual machines simultaneously,” Irvine continued.

The Cyber Academic Group was the driving force behind the creation of the new facility, but in addition to the computer scientists and software engineers for which it was primarily designed, students and faculty from across the campus will take advantage of its computing power.

“The Cyber Academic Group, DA [Defense Analysis] and the Computer Science Department are using the lab simultaneously and we are using it for our distance learning students as well,” Irvine added.

rvine noted that the lab will allow NPS students and faculty to make important contributions toward advancing the DOD’s cyber missions through its node on the Joint Information Operations range.

"We have both classified and unclassified segments of the lab and we will have a node on the Joint Information Operations range, which will allow us to participate with other DOD entities to defend and attack networks in an isolated virtual environment,” said Irvine.

"It is really nice that students can work together in an environment like this,” said researcher Diana Chung who coordinates both research and academic efforts for the Cyber Academic Group. “The lab is a great way to facilitate student learning.”

NPS Senior Lecturer Chris Eagle led the capture flag competition from the lab. He noted that the competition brought together international teams with varied levels of expertise. The students participating from his class were relatively new to cyber security; in fact, they had only been in his class for two weeks when the exercise kicked off. But Eagle is hopeful that they will gain important perspectives from the experience.

“It's a great experience for them, by the end of the quarter they will be much better at [defeating cyber threats],” added Irvine.

Scholarship for Service student Jennifer Johnson was one of the competitors using the lab for the first time.

“I hope to get an overall better understanding of assembly language [machine level code] and how to use it for cyber security,” said Johnson. “After this program, I am hoping to work for a government agency where I can help to protect our nation from cyber threats.”

Army Capt. Leander Metcalf recently graduated from NPS’ cyber systems and operations program. He is back at NPS assisting in the international capture the flag competition, and will soon be reporting to Army Cyber Command where he will work as a cyber defense watch officer.

“I came back to participate. I enjoy these sort of challenges, we are part of a team called Colonel\X20 which is program speak for the place you want to be as a programmer to control a computer’s operating system.”

While the Metcalf and his colleague have moved on, the lab remains and Irving is hopeful that it will contribute to both student learning and research for many years to come.