Students Explore Potential Use of Carbon Nanotubes in Space Propulsion

Students Explore Potential Use of Carbon Nanotubes in Space Propulsion 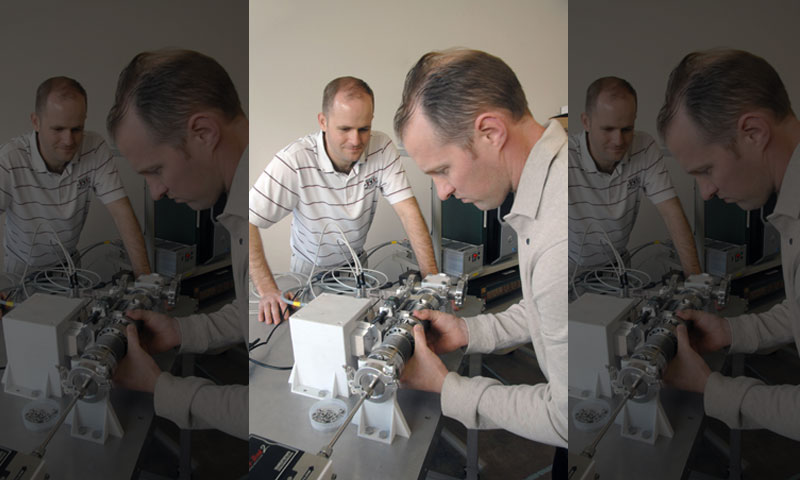 Like something from a sci-fi movie, researchers at NPS are looking at using carbon nanotubes to propel satellites in space. Recent NPS Space Systems Engineering (SSE) graduate Lt. Paul Camp explored the technology in his thesis, designing and building a field ionization test chamber for the nanotubes to be tested for propulsion.

Although the science behind the process is plenty complicated, the concept is fairly basic and eerily similar to the propulsion drives made famous in Gene Roddenberry’s “Star Trek” franchise. The carbon nanotubes would ionize a propellant gas, which in turn provides a small but constant thrust to accelerate and maneuver the spacecraft. Compared to conventional ion thrusters, carbon nanotube-based systems can be built much smaller, allowing for critical volume and weight savings.

“Carbon nanotubes have the ability to tolerate very high current densities and can handle very high potentials,” explained Camp. “When you apply a potential to a carbon nanotube, the very tip of the carbon nanotube, since it is so skinny and so small in diameter, can greatly amplify that potential and create an electric field that is high enough to ionize the propellant.

Carbon nanotubes are gaining momentum in the scientific community, and for Camp and his research advisor, Assistant Professor of Physics and Mechanical and Aerospace Engineering Sebastian Osswald, the nanotubes’ exceptional electronic and mechanical properties make them an appealing alternative to traditional propulsion systems for satellites.

Since Camp graduated in December and moved down to his new duty station in San Diego, Calif., SSE student Lt. Jessie Hallan has picked up where Camp’s research left off. Hallan’s thesis will execute tests in the chamber and make the appropriate measurements to determine the thrust and efficiencies achievable with the carbon nanotube-based ion thruster. Camp notes that his portion of the project represents just one part of an evolving research effort.

“For the past four years, the Postgraduate School has been working on trying to develop new electric propulsion engines for use on spacecraft,” explained Camp. “One of the advantages of using these engines is the fact that they are pretty small. And although they don’t generate a lot of thrust, they don’t require a lot of room, allowing for substantial weight savings while achieving very high efficiencies.

“One objective of this setup was to have as many commercial off the shelf components as possible to reduce cost. We did just that. Approximately 90 percent of this system consists of readily available systems and parts,” explained Camp. “We have individual systems that measure all different performance metrics of the carbon nanotubes, from mass flow rate to distance between electrodes. The power source of the test apparatus is also a measurement unit, able to apply the voltage needed for ionization and to measure the current that’s being generated by the gas. The information will tell us what kind of thrust the components could possibly generate.”

At 1,000 times thinner than a strand of hair, carbon nanotubes are the strongest fibers known to man, and with the research facilities at NPS’ Center for Materials Research, Hallan is able to grow the nanotubes directly onto a mount that will later be placed into the test chamber. He explains the process of growing carbon nanotubes is fairly efficient, taking less than a full day from start to finish.

“To grow the carbon nanotubes, we put a grid on the sample mount, so it would be like a small filter. Then, we deposit aluminum for adhesion and iron as a catalyst on top of the grid,” explained Hallan. “When you pass ethylene gas over the grid at high temperatures, the ethylene gas decomposes and the formed carbon starts to assemble to small nanotubes when in contact with the iron catalyst.”

Because the Navy relies heavily on space for communications and navigation satellites, the carbon nanotubes could potentially mean big cost savings if researchers were able to reduce the size of propulsion systems and the fuel needed to keep satellites in orbit.

NPS has been involved in the research of carbon nanotubes for some time and in a number of capacities. Camp explained that a combined determination by students and faculty to find solutions to real Navy problems is what keeps their research moving forward. Camp and Hallan’s research was just a piece of the carbon nanotube work being done at NPS under the guidance of Osswald. Previous SSE graduates Capt. Allen Wold and Lt. Cmdr. Sarah Michael provided invaluable research, which Camp was able to expand upon.

“Faculty motivation and experience are what has kept this project going. And we have a lot of support from them,” explained Camp. “Not to mention the students who are coming here to the Space Systems Engineering program … we know what is needed and are willing to work hard to get the job done. We have the motivation to make it work and the desire to make it succeed.”