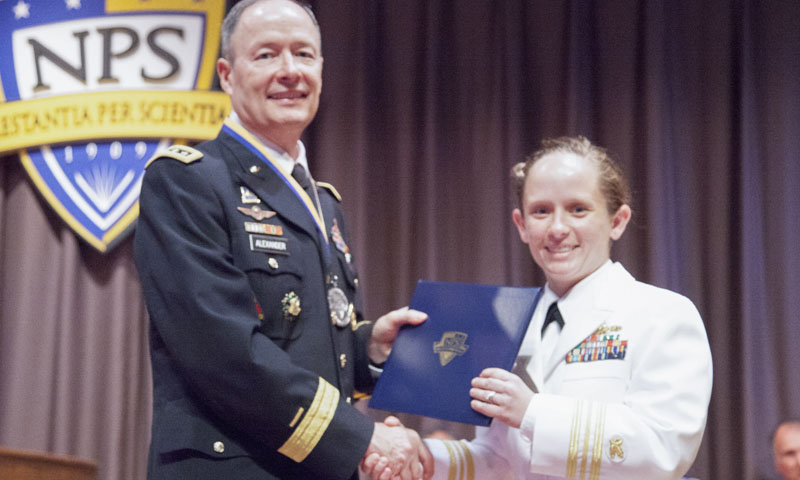 “It’s an honor to be considered for the awards because there is so much talent in both the student body and faculty, and really I should be thanking my classmates and professors who I learned from,” said Daniel. “I think the analytical tools learned in the financial management and acquisition courses here will certainly help me solve problems in my next assignment.”

Daniel earned her Master of Business Administration (MBA) degree through NPS’ Graduate School of Business and Public Policy (GSBPP). And in spite of all her accomplishments, she is quick to note that is the experience itself that she found most valuable.

“GSBPP and NPS was an excellent academic experience [for me]. I had the opportunity to learn from some truly outstanding professors, thesis advisors and classmates,” Daniel said. “Not only was I able to reconnect with some of my fellow Supply Corps officers, but I also had the opportunity to meet and interact with officers from other services and countries, which undoubtedly added mightily to the education I received.

“I will leave NPS with myriad tools that I will be able to utilize and apply throughout the rest of my career, and I know without a doubt that the experience has helped me to become a more well-rounded naval officer,” she added.

Professor Doug Brook served as one of Daniel’s advisors for her MBA thesis project, and was also her instructor in a defense budget policy course. Brook nominated Daniel and her team to receive a GSBPP outstanding thesis award.

“Daniel led an MBA project team with Lt. Cmdr. Bryan Boggs and Pakistan Navy Cmdr. Syed Ahsan that completed phase three of a yearlong project funded by PACFLT [U.S. Pacific Fleet] N-4. They built, tested and delivered an optimization model for quantifying port visit decisions in the PACFLT area of responsibility. This was a challenging project and the team did a superb job,” said Brook.

Daniel and her team briefed the project to the sponsor via video-teleconference, and demonstrated the working model. Their project report was then converted to a technical report and given to PACFLT N-4 along with a ‘plug and play’ version that will enable PACFLT planners to operate and modify the model.

“Obviously, Autumn was hard working and an excellent student, but so are many of our students,” said Brook. “If you asked me what about her stands above the rest, I would say it's the clarity of her thinking and her superb writing skills. These are valuable traits in today's Navy and senior leadership should seek her out for assignments that require those attributes,” added Brook.

Another of Daniel’s advisors, visiting NPS Department of Operations Research Professor Dr. Daniel Nussbaum, echoed Brook’s sentiment on Daniel’s clarity in thought, her ability to communicate complex ideas, and to deal with pressure.

“As we get down to the final weeks of any thesis, there are almost always analysis and writing pressures,” Nussbaum said. “Autumn handled these very well, and in fact kept the process on track to my delight, and I am sure to the delight of her teammates, under this thesis pressure,” said Nussbaum.

Daniel’s fellow classmates showered the same compliments on her as her professors and advisors. Fellow Supply Corps officer and GSBPP student, Lt. Cmdr. Brad Carroll noted Daniel’s unique optimism and commitment to success were both rare and refreshing.

“Autumn is incapable of being discouraged,” he said. “She excelled at completing assignments early rather than later. In doing so, she would not experience the stress of procrastinating while freeing her to assist her classmates.

“Autumn also has the ability to block out all distractions and focus on the task at hand.  While some students retreat to the quietest corners of the library, I would most often see Autumn studying in the main bullpen of kiosks at Dudley Knox with all its foot traffic and whispered conversations,” Carroll added.

Born and raised in Roby, with a population just over 600, Carroll noted that while her academic abilities were impressive, it was Daniel’s character that caught her classmate’s attention most.

“Coming from a small Texas farming community, I think Autumn embodies small town values, where she is responsible not only to herself but also the larger community,” he said. “She would go out of her way to help her classmates to help them succeed, whether or not it was in a group setting.”

Despite the accolades earned by her academic prowess and high character, Daniel had no time to rest on her laurels. Following graduation commencement, she immediately headed south from Monterey to report to the USS Carl Vinson (CVN 70) in San Diego where she will serve as the principal assistant for services officer aboard the aircraft carrier.