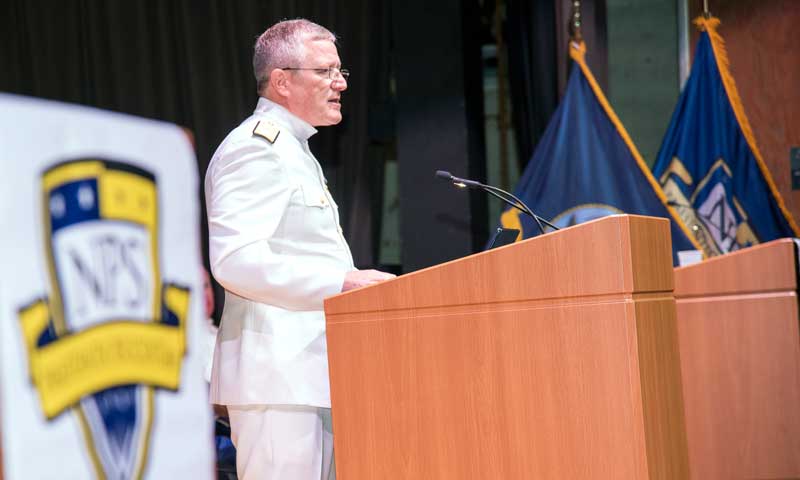 University president retired Vice Adm. Ann Rondeau bestowed the 290 advanced degrees upon the graduates, and provided insights on how important the graduates are to the nation’s future.

“This event is a celebration of individual commitment, perseverance, and accomplishment,” said Rondeau. “We have immersed you in an extremely competitive academic environment that has enabled you to focus on the challenges that affect your service, our defense capabilities and our national security.”

Rondeau went on to thank the faculty, staff and loved ones that contributed to the students' successes, while also recognizing the NPS Foundation for providing the university with an important “margin of excellence.” Following her remarks, Rondeau turned the podium over to Szymanski.

“I'm honored to be here this morning to share in your tremendous accomplishment,” Szymanski said. “I'm also humbled, and a little bit intimidated, to try to say something meaningful to over 200 graduates of very high intellect, who have honed their analytical critical thinking skills over the last 18 months.

“The Naval Postgraduate School is where the DOD has invested in its competitive advantage, it has invested in you,” Szymanski continued. “You are thought leaders, and your organizations will directly and indirectly lean on you for that leadership.”

Commissioned in 1985 as a Surface Warfare Officer, Szymanski transitioned into the SEALs in 1989. His 30 years with the Navy SEALs saw a wide scope of leadership experience leading to his tenure as the Commander, Naval Special Warfare Command in 2016-2018 and his current position at USSOCOM.

Szymanski, who himself received a Master’s in Joint Campaign Planning and Strategy at the Joint Advanced Warfighting School, underlined the value of an NPS education in fulfilling the U.S. National Defense Strategy.

Szymanski highlighted the National Defense Strategy’s three lines of effort: lethality, partners and alliances, and reform, noting that they “describe the changing nature of warfare,” where the insights and value of an NPS education are perfectly suited.

“One of the key conclusions in facing these challenges is it will require us to think, compete and fight trans-regionally and simultaneously in multiple domains and dimensions,” he said. “While you have been working on your degrees and learning to think differently, the services have been analyzing these trans-regional, multi-domain, multidimensional challenges, and have developed globally-integrated operating concepts. You have probably been studying and following them here.”

“One of the elements of critical thinking is thinking differently, and challenging your assumptions and theses, you may not immediately realize your new superpowers, or realize that they are essential when you return to duty, but know that they are,” he continued.

“To me, it is about two things. First, it's about making a difference in the relationship between leaders and followers, not necessarily a result, or an outcome, but just a positive difference. And second, it's about inspiring others to make a difference. This incredible faculty helped you develop the most important skill that will serve you best as you return to your services and parent organizations, and that is not what to think, but how to think.”

In closing, Szymanski referenced the 1939 film ‘The Wizard of Oz’ reminiscing on the Scarecrow’s journey to acquire a brain where in the end the Wizard awarded him a diploma.

“As you walk across the podium and receive your diploma, realize that this incredible institution, demanding curriculum and fantastic faculty have further revealed what you have always had – critical thinking,” said Szymanski. “You are thought leaders and your organizations will rely on that leadership.

“Unleash your superpowers,” he stressed. “Make a difference in your organization, in your team and in your relationships. And more importantly, inspire others to make a difference.”