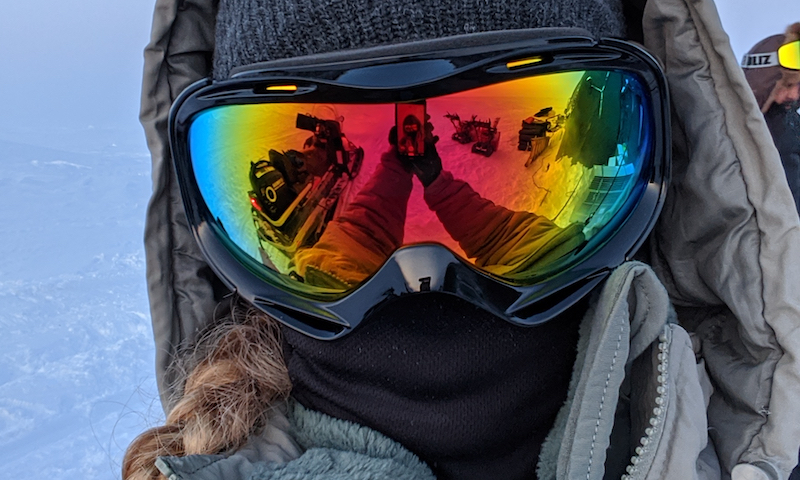 Lt. Kristen Ainslie, an undersea warfare/oceanography student at NPS, captured this self-portrait while participating in ICEX 2020 this past March, continuing a long tradition of NPS student/faculty participation in the Navy’s Arctic exercise. Ainsley is using the experience to advance her thesis research which explores the dynamics of diffusive convection, often observed in the Arctic Ocean.

Lt. Kristen Ainslie, an undersea warfare student at the Naval Postgraduate School (NPS), is on the home stretch of her challenging thesis in physical oceanography. Her research, critical to continue the advancement of the Navy’s understanding of the unique Arctic environment, explores the dynamics of diffusive convection, often observed in the Arctic Ocean.

As the Navy continues to evolve Arctic strategies, it’s clear the service has every intention, and need, to operate successfully in the Arctic region. For this reason, understanding sound propagation in these one-of-a-kind environments is paramount. Ainslie’s thesis aims to use numerical modeling to define conditions that are either favorable or unfavorable for creating thermohaline staircases, and she hopes to provide an explanation as to why they are not constantly prevalent throughout the Arctic. Fortunately for her, she has first-hand experience performing research and collecting data in the region she is diligently studying, continuing what has become a tradition of NPS student participation in the Navy’s ICEX Arctic exercise.

ICEX occurred this past March, with Ainslie part of a small NPS team that partook in the biennial, three-week effort hosted by the Arctic Submarine Laboratory (ASL). This is NPS’ third time fully participating in the exercise, a top priority since 2014 when former Chief of Naval Operations Adm. Jonathan Greenert set a goal of having more Navy personnel prepared to operate in the harsh Arctic conditions.

“It’s nice to go up every couple years in generally the same part of the ocean and get a new snapshot from time to time,” Joseph says.

The NPS team’s research has been focused on the same topic each time … turbulence and thermohaline staircases. Due to the mixing of fresh and salt water and the unique temperature gradients under the ice, it can be difficult to predict how sound will propagate in different areas around the Arctic. Submarines use sound to see obstacles and threats, but these staircases of varying salinity and temperature disrupt sound broadcasts. In most of the ocean, researchers can predict where these zones will be, and submarine operators can adapt. This truth doesn’t extend to the unique Arctic Ocean.

“There’s a lot of dynamics going on out there that can cause a lot of fading in, fading out of the target because the sound energy changes, gets scattered, refracts differently,” Joseph explains.

To learn more about how sound will react in different conditions, he and his team took connectivity, temperature, depth (CTD) water profiles. They specifically wanted to explore a thermohaline structure where the Atlantic water and the winter Pacific water meets. This experience gave Ainslie a leg up in her preparations for the thesis she’s now working.

Ainslie is using MATLAB to simulate different amplitudes of the shear wave to see if they would result in the formation or breaking down of those staircases. Data collected this year was unique because the team was able to collect data from the same location throughout the expedition.

Normally the ice floe chosen to support the ICEX camps floats arounds a bit, giving researchers the opportunity to sample different spots throughout their stay. But this year the ice floe was unusually stationary, and the data set is a bit different than years prior.

“You can plan all you want, but the Arctic gets a vote,” says ASL Director Howard Reese.

ICEX is executed via a combination of preparation in the off years – through a testing period called ARCX – and adaptation on the ice. Reese hopes to increase the number of outside projects in years to come, which would lead to potentially increasing the NPS group’s participation as well.

“I want to see the Navy get a benefit out of the ICEX program beyond the data collection, but through people getting experience,” Reese says. “Data and experience will turn into other programs that the submarine force and the Navy can use to better operate in the Arctic.”

For Ainsley, that’s exactly the benefit she is realizing through her own extraordinary experience … One she’ll likely be able to enjoy quite a bit more when she completes her thesis and graduates from the university, currently scheduled for March 2021.