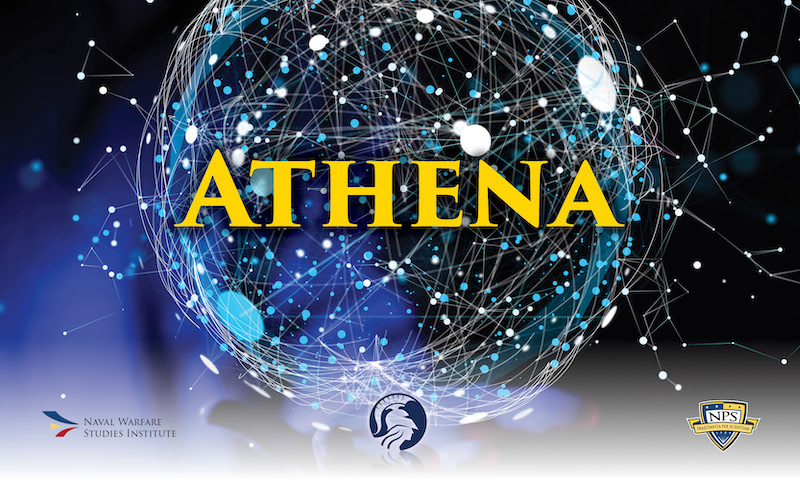 Once launched, the brand-new Athena collaboration tool will make the NPS academic and research ecosystem more accessible to the entire community of students and faculty, as well as potential partners and collaborators across the DOD.

Following years of discussion, the Naval Postgraduate School (NPS) is launching an ambitious initiative that will help keep NPS, and the Department of the Navy, in-the-know on operationally-focused research – past, present, and future – to help accelerate solutions to critical problems impacting naval forces today.

Aptly named after the ancient Greek goddess of wisdom and warfare, Athena is an innovative collaboration tool intended to accelerate NPS research into capabilities by illuminating the totality of prior and current work at NPS. Athena will increase NPS impact by creating a dynamic, real-time resource for connecting fleet and joint force needs to prior NPS work, our students, faculty and other researchers across the Naval Research and Development Establishment (NR&DE).

“Athena is based on a pretty simple idea that comes from industry best practices in research and development, which is ‘work with the people who work with your product,’” explains U.S. Marine Corps Col. Randy Pugh, NPS’ Senior Marine Representative and Deputy Director of the Naval Warfare Studies Institute (NWSI) at NPS. “In our case, the people who work with our product are naval warfighters and the folks who support them with concept and capability development. By getting all of these key players together, and providing easy access to what has and is being worked on, or could be worked on, we are setting them up to collaborate networking across traditional silos.”

The concept and subsequent development for Athena was initiated in 2019 by then NPS student Marine Corps Maj. Ryan Tice, with aspirations to help university students increase the impact of their research by creating a search engine to link experts to operators to solve operational needs. Upon Tice’s graduation, Marine Corps Capt. Benjamin Cohen took over as the lead student and served as the primary liaison between NPS and collaborators.

“One of the key features of Athena is a very robust search tool,” said Cohen, who is now director of the NavalX SoCal Tech Bridge in San Diego working for the Office of Naval Research. “Once the connections are made to allow Athena to search NPS and external research databases, users will find that they have an incredible amount of information available to them that can be leveraged to narrow, expand or redefine their own research.”

This student perspective drove the evolution of the tool into a mechanism that empowers the warrior-scholars at NPS to advance their impact by maximizing their awareness of all ongoing and past work at NPS.  Students seek direct feedback from the fleet and sponsors regarding real-world problems they can address, and Athena provides them with the ability to get the answers directly back into the hands of the warfighters.

With support from the NPS Foundation the project moved from concept to a fully functioning application that has been gifted to NPS. Hosted in Microsoft’s cloud computing platform, Azure, Athena is a discovery engine for NPS research, and will connect across a number of disparate defense research databases allowing students and other users to search topics and projects that may apply to their needs.

“We see a ton of mid-career officers, senior enlisted personnel and civilians who show up at NPS and ask the question, ‘What should I work on that would be of importance to the Navy, Marine Corps, or the Joint Force?’ And not be able to find an easy answer to that question,” noted Pugh.

“Athena is able to sweep all of these research-related things into a pile and then sort them based on what problem you are trying to solve,” he continued. “So, whether that's based on your curriculum or on your occupational field or on your interest, now they can go in and find completed, ongoing and potential topics for future applied research, as well as other like-minded professionals to connect with.

“Another huge attribute of this program is the capability to receive input from the ‘front lines,’” added Pugh. “Some problems are driven from the top down, like building the next class of ship or the newest weapons systems, but a lot of the things that we could be working on, as far as applied research goes, come from the bottom up. Using Athena, the deckplate Sailor on a ship or a Marine in an infantry battalion can identify a problem that they have and then we could help solve it. We certainly want to include them on the input side of Athena, feeding us their very real problems so that we can work on them.”

Education in today’s technology-driven strategic competition is a growing priority. According to Chief of Naval Operations Adm. Michael Gilday’s recently released NAVPLAN 2022, one of four priorities is to, “Invest in trained, resilient, and educated Sailors that can out-think, out-decide, and out-fight any potential adversary.”

Additionally, the NAVPLAN states, “We owe it to our people to create an ecosystem that recruits and retains diverse and technically-skilled personnel, educates them to out-think our adversaries, trains them to work with new technologies, and provides them with the resources to prevail in competition, crisis, and conflict.”

Since the emergence of Athena, NPS and Microsoft have announced a cooperative research and development agreement and are collaborating on the continued development and integration of Athena is part of the CRADA’s “Campus of the Future” initiative.

“NPS education and research delivers warfighter capability,” said retired U.S. Navy Vice Adm. David H. Lewis, current director of NWSI. “Education at NPS constitutes a strategic investment in our people, which is about gaining decision advantage for our naval forces in future conflicts. Research expands, enriches, and thus enhances our educational mission in the near term by delivering new knowledge, new understanding, and real outcomes based on that new knowledge. Athena is a powerful connector that supercharges our education and research missions in support of future warfighting advantage.”