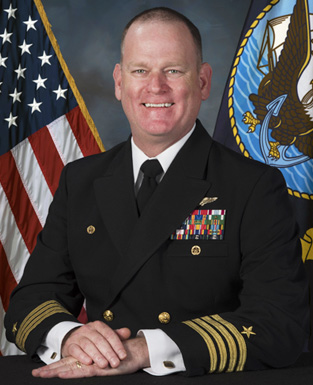 Captain Markus J. Gudmundsson, USN, assumed the duties of Naval Postgraduate School Dean of Students in February 2018. In this position, he serves as the Commanding Officer of the Student Military Element responsible for the health, welfare, conduct and student affairs related to discipline, academic standing, accountability, travel, and military administrative matters.

Captain Gudmundsson completed training as a Bombardier/Navigator in the A-6E Intruder on Whidbey Island, Washington in 1994. He reported to "The Main Battery" of VA-196 where he earned the Forward Air Controller (Airborne) qualification and completed a WESTPAC deployment in the A-6E in support of Operation SOUTHERN WATCH in 1996.

Following the decommissioning of the A-6E Intruder in 1997, Captain Gudmundsson accepted a transition to the EA-6B Prowler and was assigned to the "Cougars" of VAQ-139. He completed a second WESTPAC deployment in support of Operation SOUTHERN WATCH in 1998.

In December of 1999, he was assigned to VFA-122 and transitioned to the FA-18F. He participated in the initial Fleet Replacement Squadron syllabus evaluation and remained on board as a plank owner, and Instructor Weapon Systems Officer.

He was assigned as Department Head in the "Diamondbacks" of VFA-102 where he participated in the squadron's move from Lemoore, California to Atsugi, Japan. He completed multiple deployments with CVW-5 and the forward deployed Naval forces between 2003 and 2005.

Upon completion of his Department Head tour, Captain Gudmundsson moved to Stuttgart, Germany where he reported to Special Operations Command, Europe (SOCEUR) for joint duty from November 2005 until December 2007. He reported to VFA-41 as Executive Officer in 2008 and took command of the Black Aces in October 2009 during the squadron's extended deployment in support of Operation ENDURING FREEDOM.

In January 2012, he reported to Commander, Navy Personnel Command in Millington, Tenn. where he served as the TACAIR Commander Detailer and the Head, LCDR and JO Assignments Officer.

Captain Gudmundsson then commanded the largest Fleet Replacement Squadron in the U.S. Navy, the Flying Eagles of VFA-122, from September 2012 to August 2014.

In December 2014, he reported to Strike Fighter Wing, U.S. Pacific Fleet as Deputy Commodore of the largest Type Wing in the U.S. Navy, and subsequently assumed command on June 2, 2016 where he served as Commodore for the FA-18E/F and F-35C communities until December 2017.

Captain Gudmundsson has over 3,700 flight hours in multiple platforms, including over 2,000 hours in the FA-18F. He is authorized to wear the Legion of Merit, Bronze Star, Defense Meritoriou