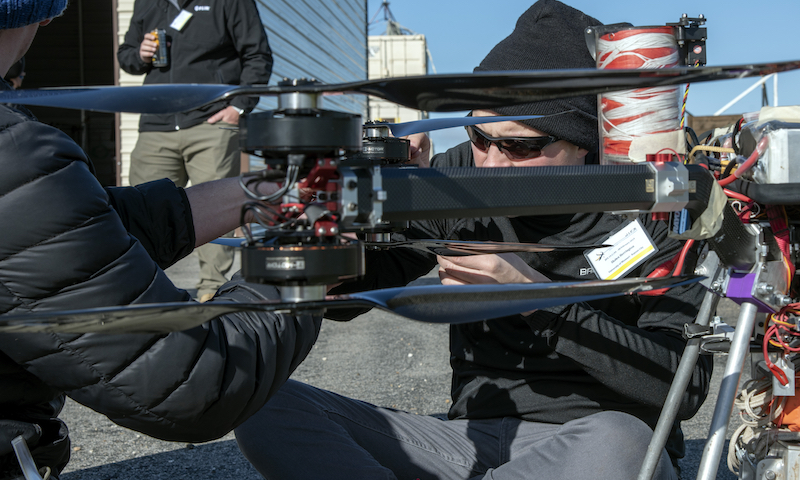 NPS FIELD LABORATORY, CAMP ROBERTS, Calif. - The Naval Postgraduate School (NPS) just took another step forward in deepening the creative bonds between the military, academia and the private sector necessary to meet the heady challenges of the 21st Century.

“JIFX is another example of how NPS is responding to the Secretary of the Navy’s strategic vision for our institution,” noted NPS’ new president, retired Vice Adm. Ann Rondeau, who made it a priority to observe JIFX during her first full week at the university’s helm. “These events, based on our successful legacy of field experimentation, bring together a diverse group of industry, academic and government participants to explore not only emerging technologies, but also new and better ways to share knowledge across these broad institutions.”

Over the week-long event held at the California National Guard’s Camp Roberts, these participants conducted dozens of hands-on experiments in austere field conditions to sandbox ways both nascent and existing technologies might be adapted to military requirements.

The key to JIFX, coordinated by the Consortium for Robotics and Unmanned Systems Education and Research (CRUSER) in partnership with research centers across campus, is that the event is not about immediate acquisition, but rather, helping to identify commercial and laboratory capabilities that may be transitioned to military applications, according to Dr. Ray Buettner, JIFX director and NPS associate professor of Information Sciences.

“It really is a collaborative learning environment with minimal rules: people come out, interact and share information, and it’s done with only enough structure to be safe, secure and legal,” he said. "JIFX is, to restate the SECNAV on a recent visit, open to those organizations, both public and private, who want to come to NPS to build, innovate, develop, test and improve ideas, products, and solutions alongside us.”

JIFX exemplifies how NPS is leading the charge to facilitate exchange between technology developers and the U.S. military.

In his Design for Maintaining Maritime Superiority 2.0, published in December 2018, Chief of Naval Operations Adm. John Richardson specifically called on the university to leverage its unique capabilities to deepen this relationship to inform rapid capability and concepts development.

“If the Navy-Marine Corps Team is to continue its migration to a true continual learning enterprise, NPS must lead that migration as the primary educational and research-based enterprise for partnering with the private sector, government and academia,” Spencer recently told the NPS community.

In this, JIFX 19-2 marks a milestone in enabling such partnering.

The February event is the first under primary sponsorship of the Secretary of Defense’s Rapid Reaction Technology Office, further expanding NPS’ mandate to enhance and increase the impact on the joint and naval warfighter.

Crossing the aisle were a range of private-sector entities, who were keen to hone their technologies’ relevance to the military. These included not only defense contractors, such as Lockheed Martin’s “skunk works” division, but also several non-traditional companies from technology giant Nvidia to start-ups like Drones4Hire.

Planet Labs is a prime example of such technology fusion in action.

Recently featured on CBS News’ 60 Minutes, the small private company – working out of a nondescript warehouse in downtown San Francisco, California – operates the largest fleet of satellites in human history.

With an active armada of more than 300 satellites circumnavigating the entirety of the planet every 90 minutes, Planet Labs is poised to revolutionize ‘Big Data’ digital imagery of the earth.

“With our ‘doves,’ we take a three-meter resolution image of the whole world every day, and our SkySat constellation is capable of sub-meter resolution,” explained Ricky Rios, Planet’s U.S. government programs manager. “We came to support JIFX with our data and see what we can do with it.

“JIFX is a great, hands-on place for this,” he continued. “Here, you’re actually trying to work together and experiment how our data can be ingested into a capability to provide greater value, and the ‘workshoppy’ environment provides great value for us.”

In the event of an environmental disaster, for example - such as the wildfires which recently devastated Paradise, California - timely satellite imagery may prove critical in providing humanitarian aid and event relief.

First responders are often limited by the equipment they can carry into a disaster zone, and such imagery can provide crucial intelligence in identifying optimal response requirements.

“Is it going to be worth the extra pounds of kit that you bring in with you, or can you leave a particular piece of equipment back?” mused Danielle Capezzuto, GEOINT Visualization Services Systems Integration Engineer with the National Geospatial-Intelligence Agency (NGA), the DOD agency responsible for such imagery intelligence.

JIFX presents NGA a golden opportunity to prototype new platforms to meet its mission set and plug in data sets like that offered by Planet to find new ways to provide Defense Support of Civil Authorities (JP 3-28).

“We’re really involved in seeing how we can apply some of the capabilities we have for humanitarian assistance efforts, so we brought a portable version of our flagship visualization tool Map of the World,” Capezzuto said. “We’re exploring how it can help our first responders use tablets or laptops to communicate better, get better situational awareness of an affected area, and ‘mashup’ different overlays of terrain data.

“As Ray [Buettner] said, ‘failure is learning,’ so coming here is a way to try different things,” she added. “This is a learning environment, so it doesn’t matter if we fail or succeed: we’ve gotten a lot of feedback for our tools, found some things that work, and some things that don’t.”

The myriad interactions at JIFX also afford NPS students a first-hand glimpse of new technologies and their potential implications for everything from space systems to defense analysis, from data information sciences to cybersecurity.

The experimentation between Planet Labs and NGA, for example, raise foundational questions on the future of imagery intelligence in a big data-driven world.

“How will we be able to pre-position military forces when the entire surface of the planet is being imaged every day?” Buettner observed. “Will new change detection algorithms render many older [operations security] techniques useless?”

“At JIFX, we’re able to ask these questions and take care of the men and women in uniform,” he continued. “That’s why we’re all here.”