NPS prepares to take on xSwarms

NPS prepares to take on xSwarms 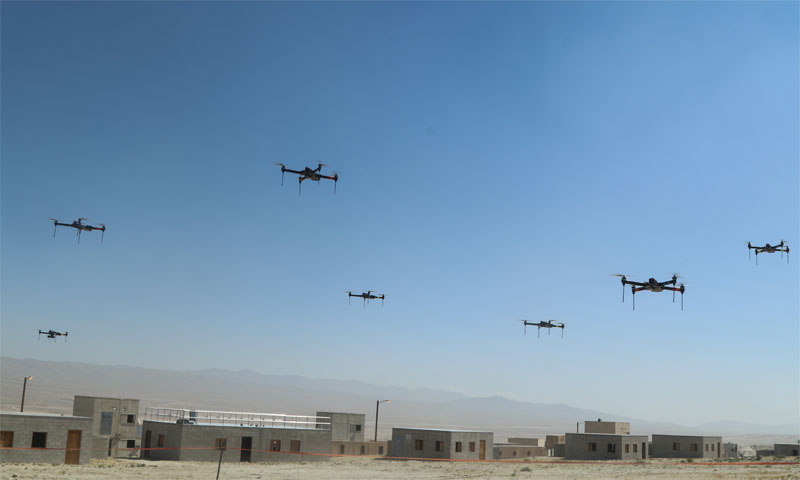 While the DOD has performed research and experimentation with UAV swarms, such as this May 2019 exercise at the National Training Center at Fort Irwin, an upcoming workshop at NPS hopes to advance the DOD’s understanding of the dynamics of large, adversarial xSwarms, especially as their size, autonomy and capability rapidly increase over time.

It’s time for a new discussion about the birds and the bees ... Or rather, fleets of hundreds of armed unmanned aerial vehicles (UAVs) and the dynamics of these massive swarms under external control – coined xSwarms.

The Naval Postgraduate School (NPS) is calling for participants for its inaugural xSwarm workshop, being held March 25-26 in Monterey to take on this rapidly emerging issue. Sponsored by NPS’ Consortium for Robotics and Unmanned Systems Education and Research (CRUSER), the event intends to bring together researchers from across diverse fields to provoke conversation about interdisciplinary research and the development of new tools for understanding xSwarms.

“What we’re really interested in is how you deal with high numbers of agents when you don’t actually know about the swarm itself; hence, the ‘X,’” said Claire Walton, research assistant professor in NPS’ Mechanical and Aeronautical Engineering department and one of the workshop’s organizers. “Whether on the fly or through observations beforehand, you’re trying to figure out as much about it as you possibly can and how you might counteract it, given the whole range of possible capabilities.”

The ability to assess xSwarms, akin to understanding the behavior of natural swarms among schools of fish to flocks of birds, is becoming increasingly imperative in a world where the enabling technologies of engineered swarms are exponentially expanding. It’s not hard to envision a not-too-distant future of fleets of self-driving vehicles, massive UAV shopping delivery networks and low-cost, lethal UAV swarms developed by our adversaries.

This poses a host of implications in the present across the military, academia and private industry as autonomous systems scale in size and capability. Although swarm technology is well understood, very little is known about what to do when confronted with other swarms for which limited or no information exists about their internal control and decision-making mechanisms.

“These two swarms would have unknowns to each other, so as we scale robotics, the idea of xSwarm is going to become increasingly relevant,” she said. “Even a couple of years ago, we couldn’t implement the algorithms at the scale we can now, hardware is exponentially becoming more capable.”

“I think it’s pretty quickly going to slam us,” she added.

The xSwarm workshop aims to head this off by sparking conversation between a wide range of disciplines: robotics, computer science, mathematics, engineering and beyond.

Over the course of the two-day event, panelists will present research, followed by constructive dialogue exploring various aspects of xSwarms and how these intersect in order to lay out future possibilities of what can be done in this uncharted territory.

The intent, according to Walton, is to open Pandora’s box.

“A successful conversation would actually lead to a big explosion of questions being asked, much more than are currently being asked,” she said. “People aren’t even really asking the huge amount of questions that are going to come with this.

“We’d actually like to stir up more problems, because that would cause a lot more research excitement about this,” she continued.

When Walton and her colleagues first set out to explore the issue, they found scatterings of research on the topic spread out over a variety of fields, but really nothing in the way of the cross-pollination necessary to properly address the issue.

“We were searching for a community because we wanted to get more into this research,” she recalled. “We weren’t really finding a central home for this research, journals or conferences devoted to this, so we just kind of decided to bring it here since we couldn’t find it anywhere else.”

NPS, as a bridge between academia, the military and private industry, is the natural place for this. In addition to CRUSER, the Center for Autonomous Vehicle Research (CAVR), academic departments and a plethora of interdisciplinary programs stand ready to respond to Department of Defense (DOD) needs in this emerging domain.

“The xSwarm workshop is a good venue for NPS to demonstrate its potential with its unique role between the academic and the DOD,” Walton said. “This is a good way for us to flex that muscle and demonstrate that.”

The event will be held at the Monterey Dance and Event Center and is open to the public. Attendees will have the opportunity to present relevant research, suggest areas of inquiry to the community, and lead or participate in panel discussions.

Registration is open via the xSwarm Workshop website (https://nps.edu/web/cruser/xswarm). The deadline for abstract submissions is Friday, February 21.

A follow-on counter-swarming workshop - open only to DOD personnel - will be held March 27 on the NPS campus. For more details, e-mail workshop organizers at xswarm@nps.edu.