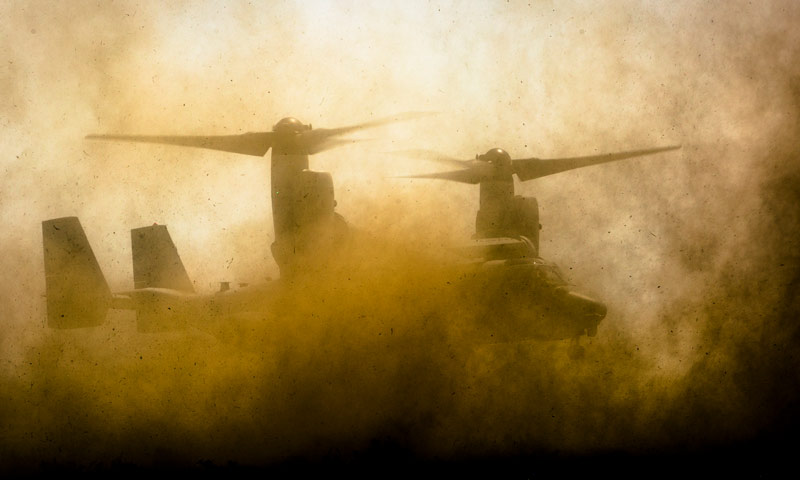 A U.S. Marine MV-22B Osprey lands at Babadag Training Area, Romania, in this 2015 photo illustration, kicking up clouds of potentially dangerous particulates in the process. Research at NPS employing the latest in Ultra High Temperature Ceramics has the potential to increase the resilience of turbine engines to particulate ingestion, critical for DOD aircraft operating in sandy and salty environments.

In late 2015, two Marines were killed and 20 others injured after a MV-22 Osprey crashed during pre-deployment training at Bellows Air Force Base in Hawaii. The culprit … Airborne sand and dust particulates caused brownout conditions for the aviators and were ingested into the aircraft’s engines, melting due to the high temperatures and degrading internal components compromising the aircraft’s power and lift.

Less than a month later, when Volcano Momotombo erupted, commercial flights were forced to stay grounded to avoid particulate ingestion from the volcano’s lingering blast.

Sand, dust and other particulates have been a thorn in the side of aircraft technology for decades. In the 90s, the issue was mainly centered on erosion, but better coatings on the engines have solved that problem.

Now, the problem is more related to the high temperatures generated in newer turbine engines, allowing for increased performance and power. To their detriment, however, these higher temperatures melt particulates when ingested into the engine, which can clog the turbine.

Their study, funded by the Strategic Engineering and Research Development Program (SERDP), was the first to look at the potential of utilizing UHTCs in aircraft turbines. SERDP is a joint effort by the Department of Defense (DoD), the Environmental Protection Agency (EPA), and the Department of Energy (DoE). This project was part of a collaboration between NPS, the U.S. Army Lab, Stony Brook University, and the materials company Oerlikon Metco.

While different companies have developed filters to reduce sand intake, it’s nearly impossible to keep every particle out of a turbine, and unfortunately, the tiniest particles are the ones that melt the easiest. Other research has looked into ways to slow down sand and other particulates from melting by quickly resolidifying them through the introduction of counter-reaction, but this has not stopped particulates from sticking onto the engine in the first place.

The NPS team, therefore, decided to look at the problem from a materials standpoint. Before coming to NPS about four years ago, Nieto worked at the U.S. Army Research Laboratory (ARL), and brought his research and partnership with ARL with him to NPS.

Ansell brought to the team images of different particles exposed to ultra-high temperatures captured with a transmission electron microscope to see if and how they interacted with the UHTCs. Luo provided the ceramic materials and helped analyze the results using his expertise in high-entropy ceramics.

Samayoa says this whole project was a heavy learning curve since he was a physics student, but the research fit well within his goals. And the quality of his work showed, Nieto claimed, saying the research Samayoa performed would be work fit for a PhD student.

Adding to the complexity of research using UHTC is the challenge of simulating the heat emitted by modern gas-powered turbines. The researchers needed to find a way to test out materials at that temperature, requiring the team to acquire the hottest furnace NPS has ever had. Once up and running, the research team developed a project to test the UHTCs at different temperatures for different lengths of time.

“We were the first to even experiment at these higher temperatures for any material for these applications,” Nieto says. “It was completely unexpected that as you would go higher in temperature, you would actually get some degree of chemical inertness from these ultra-high temperature ceramics where they were not interacting with the molten sand. It opens up a possible path forward in how we are designing these engines.”

The researchers published their findings in the materials science focused journal, Materialia, in Dec 2021. Samayoa, a surface warfare officer, has now graduated and is now completing the Department Head pipeline before reporting as Weapons Officer onboard USS Princeton.