NPS Student-Professor Team Connects Research to Marines in the Field

NPS Student-Professor Team Connects Research to Marines in the Field 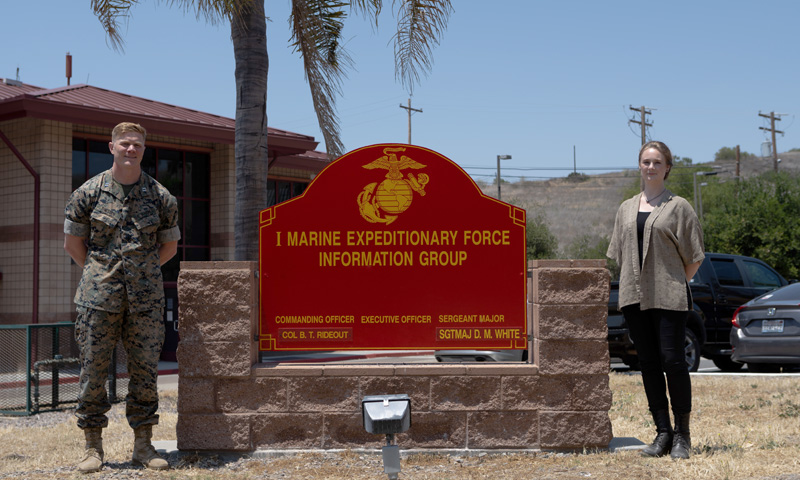 This past Summer, a Marine infantry officer and a cryptographer from the Naval Postgraduate School (NPS) journeyed to Marine Corps Base Camp Pendleton, California, where I Marine Expeditionary Force (I MEF) was holding the Pacific Sentry 2021 field exercise. Their mission … to pilot an idea.

The team, consisting of NPS student U.S. Marine Corps Capt. Christian Thiessen and Dr. Britta Hale, an assistant professor in the NPS Department of Computer Science, would integrate with the I MEF team; in doing so, they would demonstrate how a two-week NPS embed could both dramatically increase shared awareness between NPS researchers and practitioners in the field and mitigate the persistent challenge of NPS students’ time spent away from the fleet for their studies.

Their pilot program, dubbed the NPS-Fleet Engagement Program, places NPS students and faculty in situ with operational units across the force with the ultimate goal of deepening awareness, trust and collaboration between the fleet and NPS.

“By visiting with Sailors and Marines aboard their ships or submarines, on the flight line or in the field, we ensure that NPS truly understands their challenges or shortfalls, and that we understand them in the context and reality of ongoing missions and operations,” noted Col. Randy Pugh, Senior Marine Corps Representative and Associate Dean of Research at NPS. “Faculty-student teams conducting assessments or capturing statements of need at sea or in the field are highly-visible examples of NPS’ commitment to providing exactly the education and applied research the fleet and fleet Marine forces need now as well as in the future.”

The NPS-Fleet Engagement Program grew out of NPS’ existing ‘Industry Internship’ program, which enables students to participate in a weeklong exchange with commercial and federal entities during each academic quarter’s Thesis Week.

While partnering with industry is extremely beneficial for students in gaining first-hand, topical insight into how commercial companies develop cutting-edge technologies and how they do business, Thiessen saw an opportunity to take this a step further. Expanding the concept, he thought, could also substantially meet emerging research needs of the Navy and Marine Corps’ principal stakeholders. At the same time, NPS students are provided an opportunity to refresh perishable operational experience while simultaneously examining challenges through a broader lens of identifying sustainable solutions for the fleet. For NPS faculty, it’s a rare chance to immerse themselves in a tactical operations setting that their students experience regularly.

“There’s a significant gap spent away from the fleet when we come to NPS,” Thiessen explained. “For example, as a Marine officer, I have my two years here and then I have three years [through a utilization tour] at my next duty station. As a result, a lot of people are removed from their primary occupational specialty for anywhere from three to five years.

“The NPS-Fleet Engagement Program started as a way to address that challenge while giving students operational experience and to keep them tethered to the fleet while also sending a signal that NPS is conducting relevant research to address the operational problems that the fleet needs,” Thiessen said.

When the subject came up in a conversation with a professor, Dr. Britta Hale, she also saw in it the potential to directly connect NPS researchers with the end users of the technologies NPS was researching.

Normally, a wide chasm separates the “research demand” and “research supply,” spanning a broad chain of program managers, military officers as well as industry executives and marketers before actually reaching the people who initially registered the need and who will ultimately use the technology.

“The NPS-Fleet Engagement Program can shortcut this entirely and close this gap,” Hale said. “With it, you are taking researchers right to the problems and the very users who have them. We get to see directly what’s going on and it is often much more than what’s on the surface.

“In that respect, we can go straight to addressing the issue,” she continued. “So the ultimate goal then is that you get technology and new ideas that are extremely useful to the people who are the end users.”

This was precisely what the team accomplished at Pendleton.

“We were all over the place in a few weeks, and it turned out to be a really great experience talking to people that I had no exposure to previously,” Thiessen said. “I’m an infantry officer by trade, and it’s a pretty well-defined profession because we’ve been doing it for a while now, so stepping into this role was really eye-opening. Information operations is a rapidly changing environment that the Marine Corps, the Navy and the entire DOD are still trying to define.”

“We had excellent conversations with these different groups while we were down there,” Hale added. “There are a number of research projects that actually sprung up directly, and Captain Thiessen brought back numerous topics to share with other students.”

Observing the Marines in action allowed them to identify challenge points in real time.

Networking in the field, for example, can be a complex affair, especially for a very large unit distributed over wide areas. Setting up relays, getting large files to transfer to the right place at the right time, and security of the system all present ample opportunities for things to go sideways.

Having eyes on the process enabled the team to identify potential snags and suggest solutions or even ways to improve the network, Hale noted.

“Once you see it in practice you can say ‘oh, that’s what you’re dealing with; we’ve got a solution for that,’” she said. “It’s not until you actually see that trouble point that you can address it that way. Perhaps all it takes is a small change to the program that could be solved in a couple of days with the researcher.”

A direct connection with forces in the field in this manner also has the potential to go a long way in keeping NPS students’ operational experience from “fading,” according to Thiessen. This directly meets the Marine Corps’ talent management goal set forth in the 38th Commandant’s Planning Guidance of retaining high-performance Marines, especially those that are “inclined to learn, think and innovate.”

To facilitate the program, the NPS-Fleet Engagement Program will be managed within the Naval Warfare Studies Institute (NWSI), with a Marine officer or senior non-commissioned officer formally detailed to serve as program coordinator.

“NPS is completely committed to supporting the development of concepts and capabilities that will ensure the Navy-Marine Corps team remains the most capable fighting force in the world,” Pugh said. “Through the NPS Fleet Engagement Program we will have regular and meaningful contact with the fleet and fleet Marine forces and we will be constantly alongside Marines and Sailors as they innovate and experiment with new ideas on how to fight and new weapons, systems, and networks with which to fight.

“NPS is privileged to support front line units as they work to accomplish this difficult task,” he added.