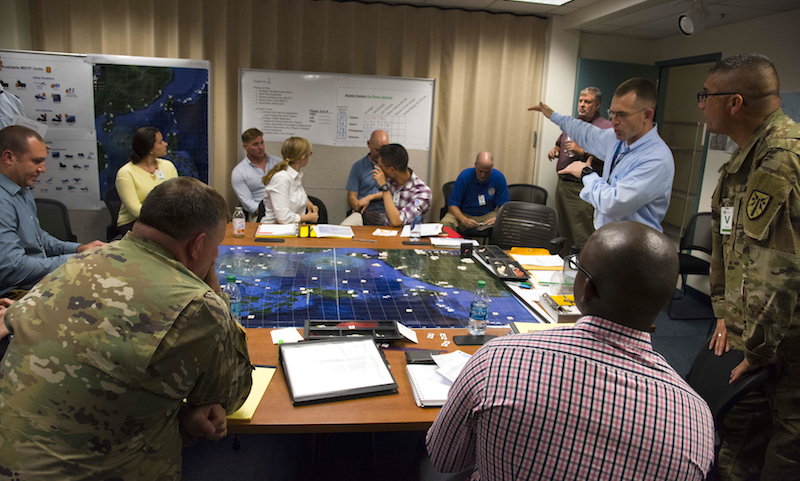 In the near future, a crisis suddenly flares up on the southern Philippines island of Mindanao, and U.S. Marines are called to action to evacuate U.S. civilians trapped in a hostile city. The nearest Marine Expeditionary Unit, however, is several days away.

Several hundred Marines with the Marine Rotational Force – Darwin, on a training mission nearby with the Australian military, are re-tasked to embark on a Royal Australian Navy (RAN) Canberra class amphibious assault ship. With the support of a U.S. Navy destroyer and a small Littoral Combat Ship, they must extract the besieged civilians from a rapidly devolving environment bristling with armed foreign fighters, mortar fire and explosives-laden small boats.

This is a fictional, though not implausible, scenario which raises a host of questions about the interoperability of American and Australian militaries that U.S. Marine Corps Forces, Pacific (MARFORPAC) is keen to answer.

“Can we do it? What can’t we do from Australian ships? Can you land a V-22 Osprey on a Canberra class amphibious ship? How many, and what about maintenance, crews and ammunition? How are Marines going to be supported on-ship and then off-ship? How will command and control work?” asked Marine Corps Capt. Chris Fletcher, a Naval Postgraduate School (NPS) graduate student tasked by MARFORPAC to explore the logistical challenges of such a joint U.S.-Australian littoral combat operation.

“Nobody really knows, so we’re going to work that out,” he said.

Doing so in real life would potentially cost millions of dollars and endanger service members’ lives, yet Fletcher and his five-man team of fellow Marines recently accomplished this by playing a wargame over two days.

Their wargame, entitled Combined Australian/U.S. Amphibious Operations, was the culmination of an 11-week capstone wargaming course for their graduate thesis. Along with four other teams working closely with Department of Defense (DOD) sponsors such as MARFORPAC, the students rigorously designed, developed and executed wargames which provide analytic input into some of the nation’s most pressing security issues.

The five wargames – classified and unclassified – were then played out during NPS’ Wargaming Week, held in early June by the Operations Research (OR) department’s Wargaming Activity Hub.

“The great benefit of this wargaming course is it matches student teams with a real-world sponsor who has a real-world problem,” said Dr. Jeff Appleget, Wargaming Activity Hub director and senior lecturer in the OR department. “Their problems aren’t articulated in terms of ‘use this tool to solve this problem’, but ‘I have a problem and help me understand how to solve this problem.’”

NPS students bring to the table diverse military backgrounds and academic training in advanced mathematics and statistics to address these problems through analytic wargaming.

Fletcher, a Marine aviation maintenance officer, teamed up with infantry and supply officers to create their game. It was played out at Wargaming Week by fellow Marines, U.S. Navy officers and visiting RAN officers, who utilized their operational experience to optimize results.

“The game was an overall success,” said Fletcher. “Our goal was to set the conditions for more detailed wargames to follow, and we did that. We networked with our Australian allies to develop our understanding of how they operate.”

“It isn’t easy to do in a two-day game, but we made some progress that we believe will be beneficial for future military interoperability,” he added.

The feedback from the wargames’ sponsors has been overwhelmingly positive.

One of the other teams developed a classified game for U.S. Army, Pacific to explore the Multi-Domain Task Force, a new concept that U.S. Army Training and Doctrine Command (TRADOC) is developing to use new technologies to shape future battlefields across all domains: land, air, maritime, space, cyberspace and the electromagnetic spectrum.

“[The wargame] provided thought-provoking dilemmas that caused us to explore and identify issues concerning the breadth and scope of employment of this Army asset and identify potential gaps for further study,” James Anderson, a representative with the Army Cyber Center of Excellence’s Capability Development Integration Directorate, wrote Appleget after participating in the wargame.

“In such a short time, [NPS students] put together one of the best table top exercises I have been involved with in my 15 years of wargaming for TRADOC,” he said. “It is important that our younger service members learn to do this, and provide fresh, new perspectives to the challenges we face in today’s uncertain world.”

For more than three decades, NPS has taught its students the craft of wargaming.

In the mid-1980s, a partnership was formed with the Naval War College to share course materials and naval simulations, and NPS launched a resident Wargaming Applications course through its OR department that continues to this day.

“NPS is one of the very few institutions that has a robust wargaming education program to bring wargaming to the front and to get experienced wargaming practitioners that senior leadership can leverage,” Appleget said.

Wargames, writ large, are a dynamic representation of conflict or competition in which people make decisions – and respond to the consequences of those decisions – without using actual military forces.

Analytic wargaming taught at NPS is specifically designed to collect and analyze information from wargame play; this is then either fed directly into a decision or used to develop other analytic products.

“Wargaming is basically the study of how people interact in military solutions,” Appleget explained. “So it’s ultimately a study of human decision-making.”

Wargaming is often confused with combat modeling, which is using computer simulations to study combat through automated processes. Such modeling was very effective at studying potential Soviet attacks through the Fulda Gap at the apex of the Cold War, but of minimal utility for the complex environments the U.S. military serves in today, and will into the foreseeable future.

“For the last several decades, senior leaders focused on computer-based combat simulations as the go-to tool du jour, which is a great tool to examine set-piece, ‘Red vs. Blue,’ high-intensity kinetic operations,” Appleget said. “It’s not a very good tool to examine situations such as irregular warfare or hybrid warfare, where there aren’t major combat operations between two uniformed opponents.”

The Wargaming Activity Hub at NPS has excelled at honing this analytic wargaming capability in U.S. military officers from all services. It’s part of NPS’ OR department, yet draws on expertise from the Defense Analysis department, the Modeling, Virtual Environments and Simulation (MOVES) Institute, and from many other entities across campus.

Stood up in 2014 to meet a surge of interest in wargaming across the military and synergize the myriad wargaming activities at NPS, the Wargaming Activity Hub serves as a nexus for the DOD, its allies and partners to access NPS’ unique student body and faculty.

Over the last five years, for example, NPS students have conducted more than 50 wargames for dozens of sponsors from the U.S. Navy, Marine Corps, Special Operations Command, the Australian Defence Force, the Norwegian Armed Forces, the Royal Canadian Navy, and many others.

“Our mission is to leverage wargaming to conduct high quality education, analysis and research; to prepare future leaders; and to help shape and form key decisions on the future of the DoD,” Appleget said.

This triad – analysis, education and experience – is the guiding light of the Wargaming Activity Hub.

The first two weeks blend lecture and practical exercises, and by the third week students are introduced to their sponsor to begin the design process of a wargame. After the sixth week, students focus solely on designing and developing their wargame.

“The idea is that up until their fifth quarter, students have learned a lot of high-level techniques like linear programming and high-level statistics, but when they graduate they’re going to have to apply these tools in a military context,” Appleget explained. “The wargaming sponsors pose a very fuzzy problem that is not clearly defined, and simply refining that problem is something you typically don’t practice when you’re learning a specific tool like linear programming.”

Creating the wargame provides invaluable experience in applying these acquired tools. Playing the game out during NPS’ Wargaming Week serves as the student teams’ final exam.

Starting in Fall 2016, NPS has also offered its Advanced Wargaming Applications Course, which allows student teams to take a deeper dive into a topic than the initial course.

Over the Summer of 2018, they will head to Camp Smith, U.S. European Command, NATO’s Allied Command Transformation and Sweden’s Defense Research Agency to deliver a compressed version of the 11-week course.

In the end, officials with the Wargaming Activity Hub say, the effort is about providing the American military, and its partners and allies, with a steady stream of officers capable of conducting analytic wargaming. As this cadre advances in their careers, this population will prove a strategic asset as the demand for analytic wargaming grows in an increasingly complex world.