Strategic gaming exercises focused on the asymmetry of information, movement, and power
PLAY NOW
RETURN TO GAME CENTER
REPORT A BUG
CONTACT US ABOUT GAMES
Balance of Terror - Video Template 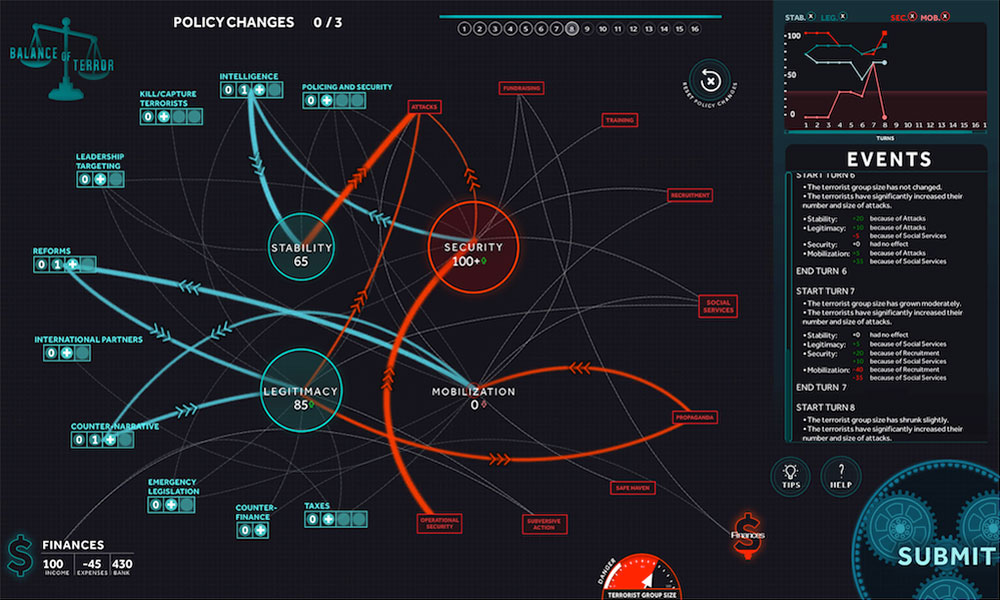 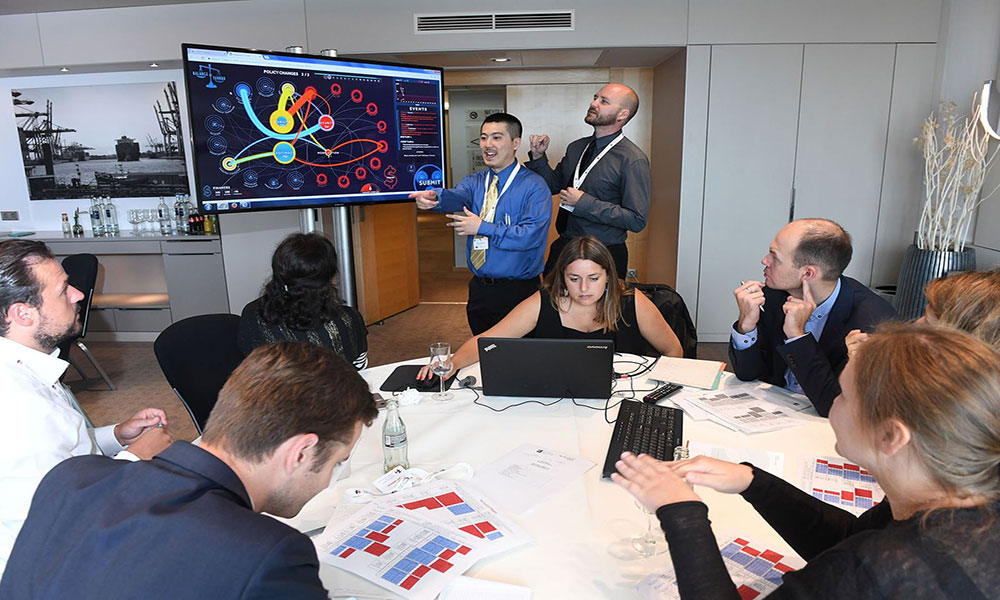 Balance of Terror is a two-player strategic game of terrorism and counterterrorism. Nothing comes easy for either side, with both players facing difficult tradeoffs. The state must protect its citizens (stability), but cannot over-react and lose the support of the people (legitimacy). The state is also financially constrained, with limited resources (budget) to spend each turn, and a reserve fund of unspent resources from previous turns (bank). The terrorist, meanwhile, must grow its organization (mobilization), while protecting existing members (security). The terrorist also has a budget for each turn plus a bank of unspent resources. The state player wins if the terrorist’s security or mobilization drops too low, while the terrorist wins if the state’s stability or legitimacy drops too low.

Both the terrorist and state have a range of actions they can take. The terrorist can conduct attacks, recruit members, conduct propaganda, provide social services, and more. The state can kill/capture terrorists, improve its intelligence, defend against attacks, engage in reforms, target terrorist financing, and more.  Most importantly, neither side can do everything they want to do because of budget constraints. If either side is unable to sustain its policies, it will go bankrupt and lose the game.

Every action also comes with a tradeoff. For example, a state action to defend itself with additional police would bolster the state’s stability but would also help the terrorists mobilize new members. Likewise, for example, a terrorist attack would undermine the state’s stability but also hurt the terrorist’s operational security. Each policy option (like attacks, or reforms) has a range of levels. Players can incrementally decide on the level of action they take, but higher levels require more resources and have more pronounced tradeoffs. In each turn, both players can make up to three changes in the levels of their policies, and this includes both increases and decreases in the policy level. This forces players to think through their choices carefully and also creates future costs for the
continuation of the policies.

Each player takes their turn at the same time, so players must choose how reactive or proactive they want to be. They must respond to their adversary’s actions, but also must take the initiative if they want to win. With all of the possible strategies and ways of playing the game, there is no dominant way to win. Winning or losing depends on the interactions between the two players. In fact, the dynamic interactions allow this game to be an opportunity for strategy experimentation. Terrorist players can play like Hezbollah, and try to provide more social services, or like Al-Qaeda, and try to conduct a massive attack, or anything in between. Likewise, state players can counter the terrorist threat by building a police state, or take a “softer” approach of negotiations and reforms. The player with the best strategy, relative to their opponent’s strategy, will win.