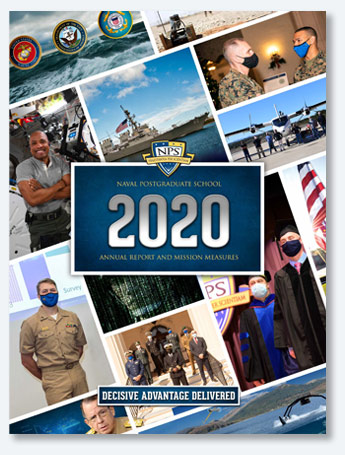 Highlights from the 2020 Calendar Year and Mission Measures A Message from the President
What a year! 2020 was defined by COVID-19, but COVID-19 did not define the Naval Postgraduate School [NPS]. I say this with the utmost pride and awe in all that was accomplished, and simultaneously with the utmost respect and empathy for the suffering many experienced in our community, military, across our country and around the world. Everything changed. We learned more about ourselves, and how to live in new ways. From shutdowns and face masks, to elbow bumps and socially distanced, what kept us apart also brought us together.

2020 exemplified Who We Are ... We found new ways of learning and interacting at NPS. With safety and public health as our priority, the NPS faculty, staff and students transitioned to full distance learning and telework nearly overnight. Not a single academic day was lost. For many, the difficulties were also inspiration to come together in solidarity to support each other, to watch after and tutor our military children, and ultimately fight alongside to overcome a common viral enemy.

Ordered  by President Theodore Roosevelt, the record-setting world cruise of the Great White Fleet, 1907-1909, was a pow-erful show of American strength and U.S. foreign policy. 16 of the latest U.S. Navy’s battleships provided the strongest evidence yet that science and engineering prowess were of critical impor-tance to U.S. seapower.

To further sharpen our Naval technological advance, Secretary of the Navy George von L. Meyer signed General Order No. 27,  that same year establishing a graduate-level school of marine engineering at Annapolis, which would later become the Naval Postgraduate School (NPS). In 1912, Meyer broadened NPS’ role in officer graduate studies by directing that ordnance and gun-nery electrical engineering, radio telegraphy, naval construc-tion, civil engineering be added to the curriculum, laying the foundation for NPS to become an innovation hub where officers apply the tools of graduate academic rigor to developing solutions to operational problems.

During World War II, Fleet Admiral Ernest King, Chief of Naval Operations and Commander-In-Chief of both the Atlantic and Pacific fleets, established a commission to review the role of graduate education in the Navy. By the end of the war, it was apparent that the facilities of NPS at the Naval Academy at Annapolis, were insufficient for the Navy’s future needs.

... including classified and interdisciplinary research ..."

➤ More than 1,000 research thesis and capstone projects delivered every year

➤ In 2020 over 150 interdisciplinary education, research, and field experimen-tation programs executed 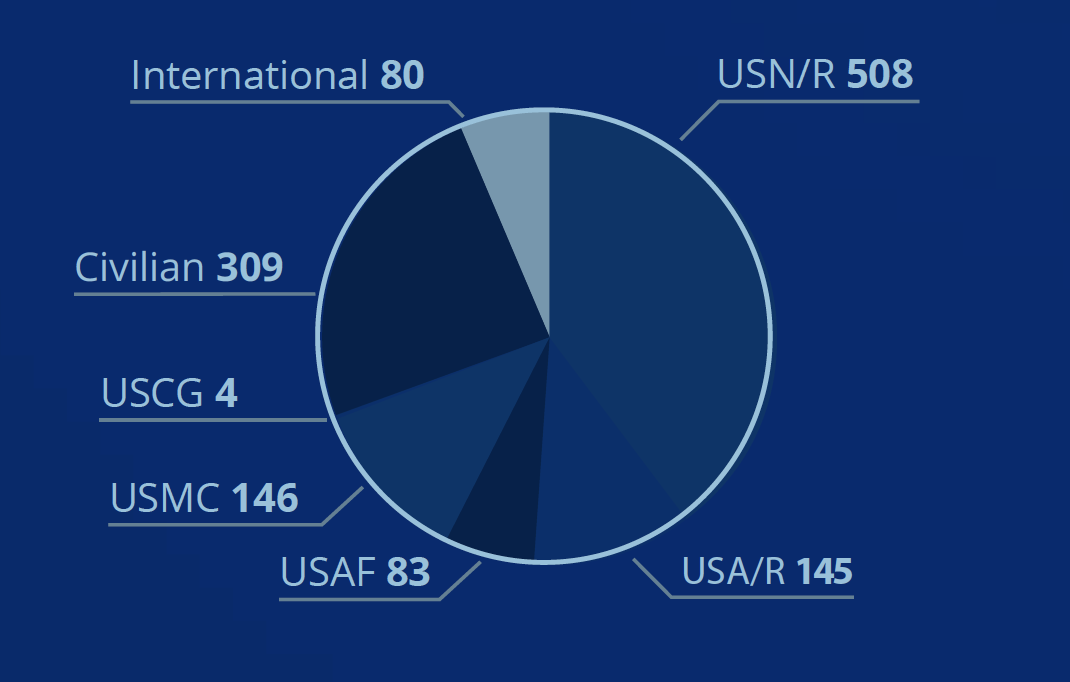 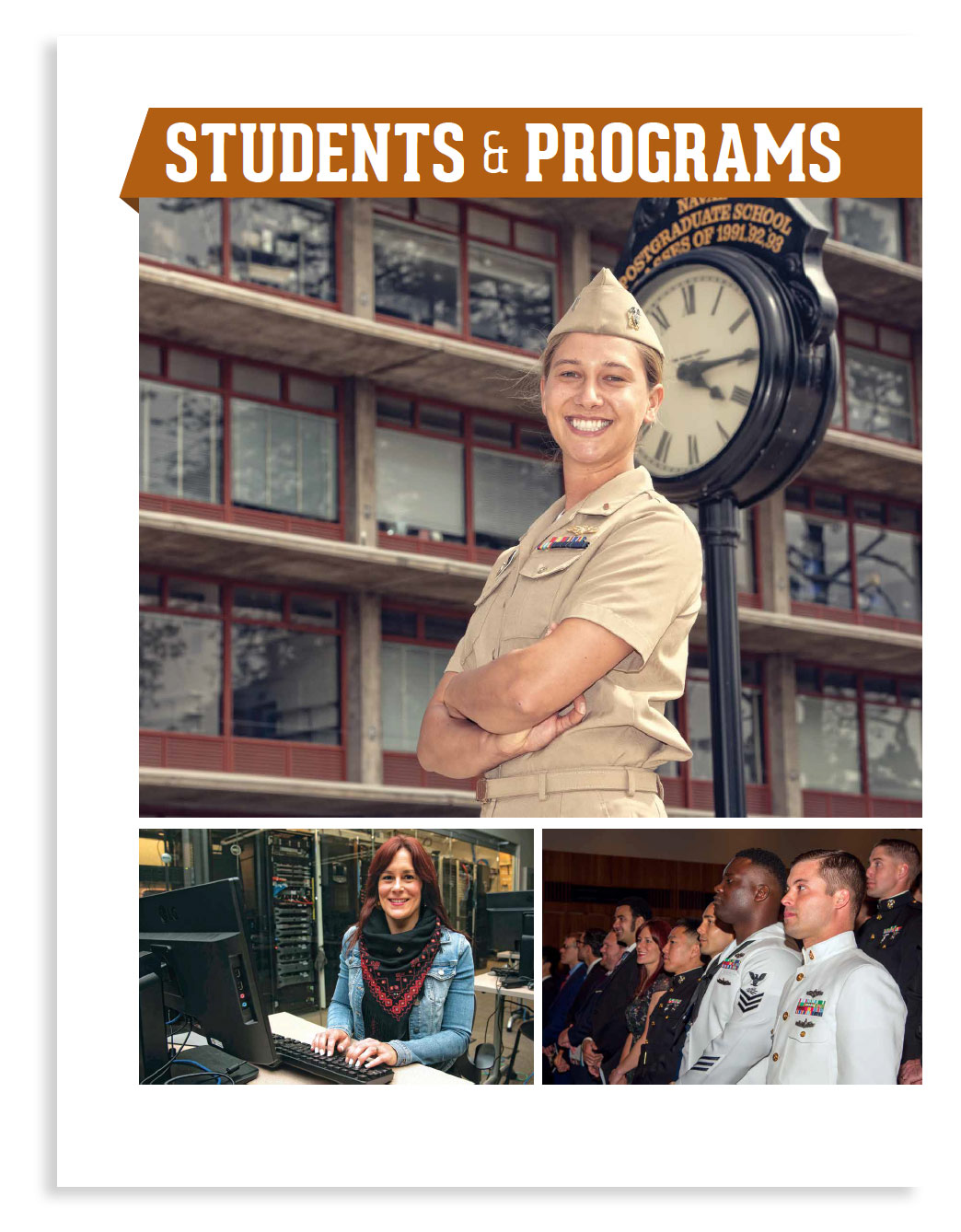 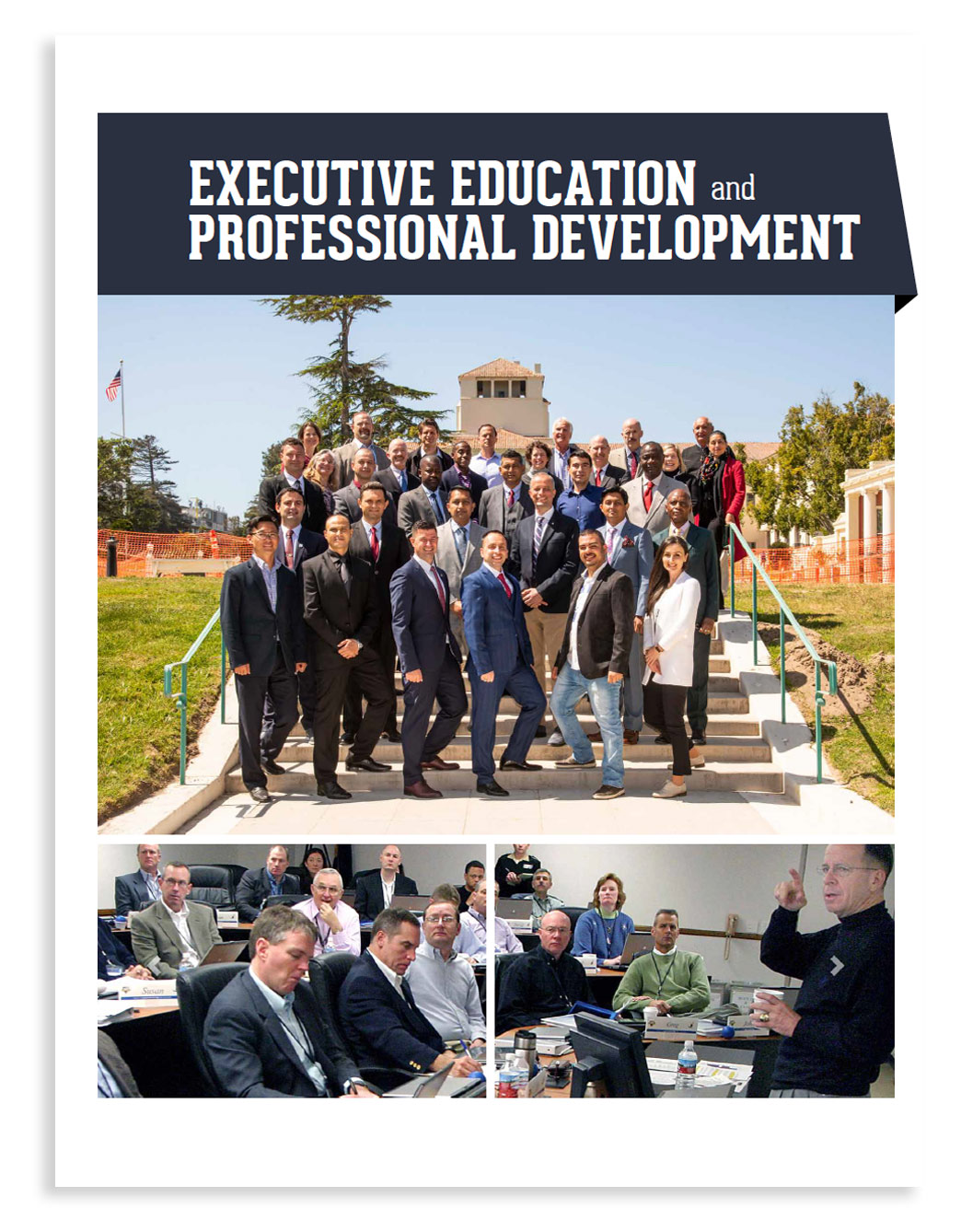 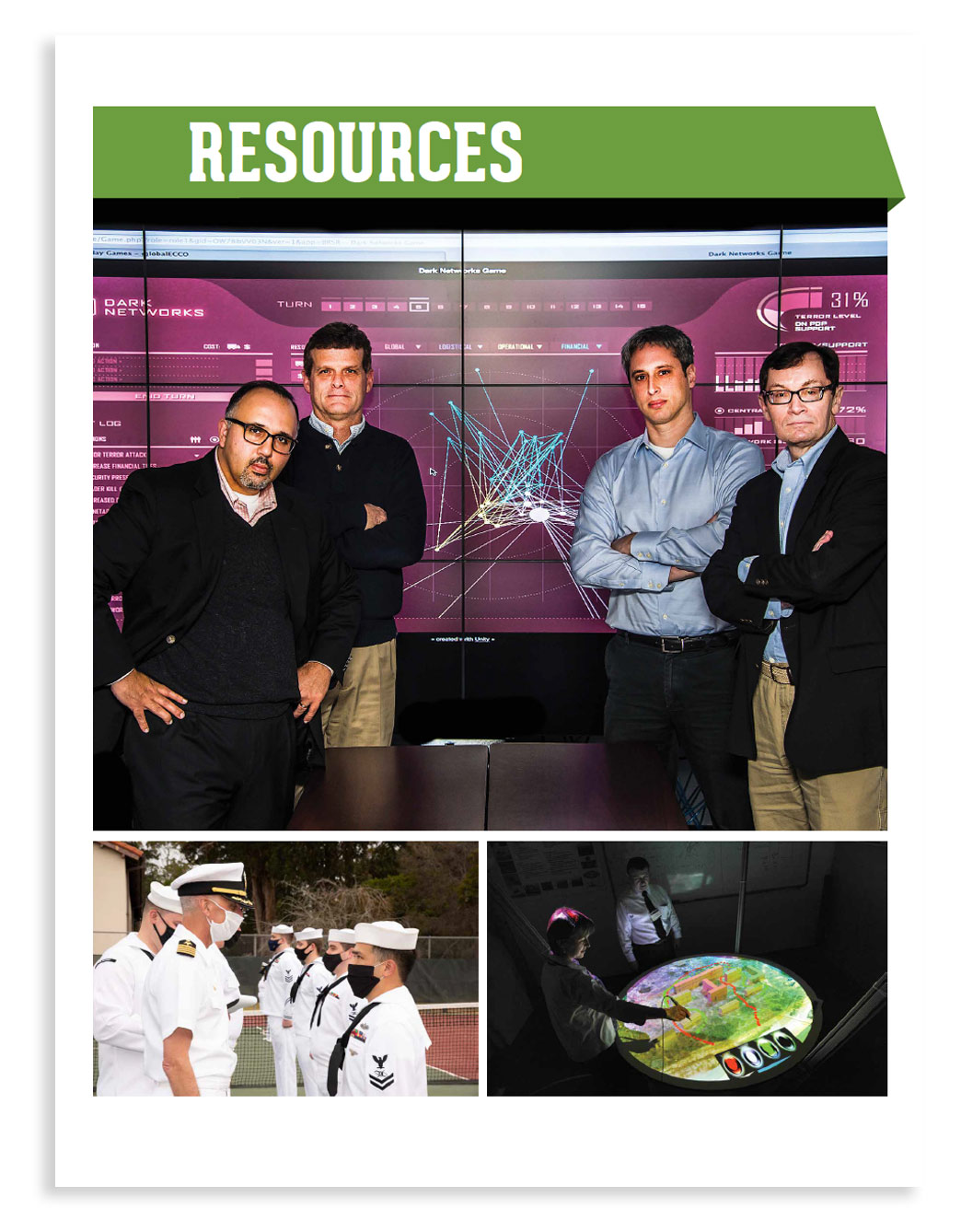 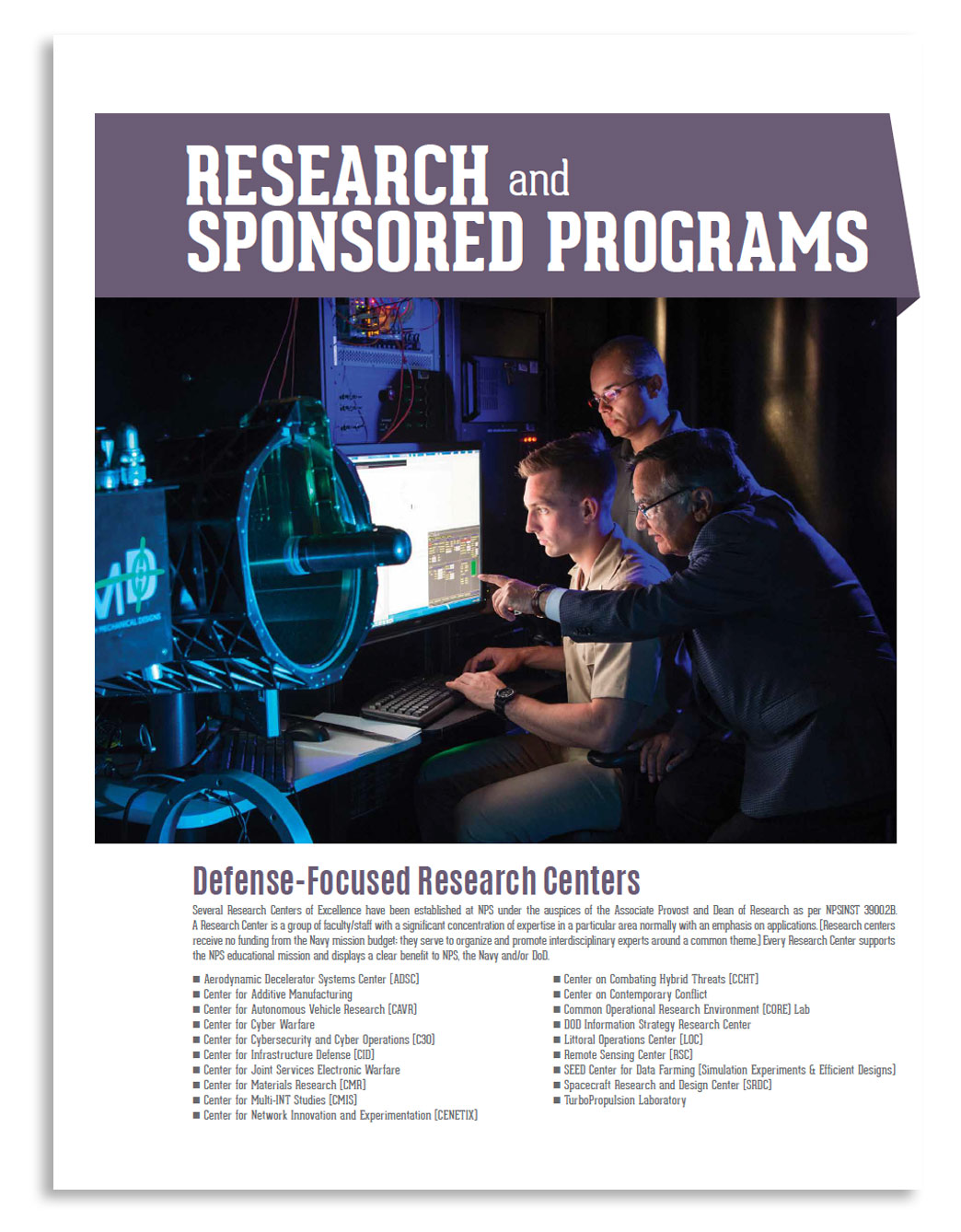 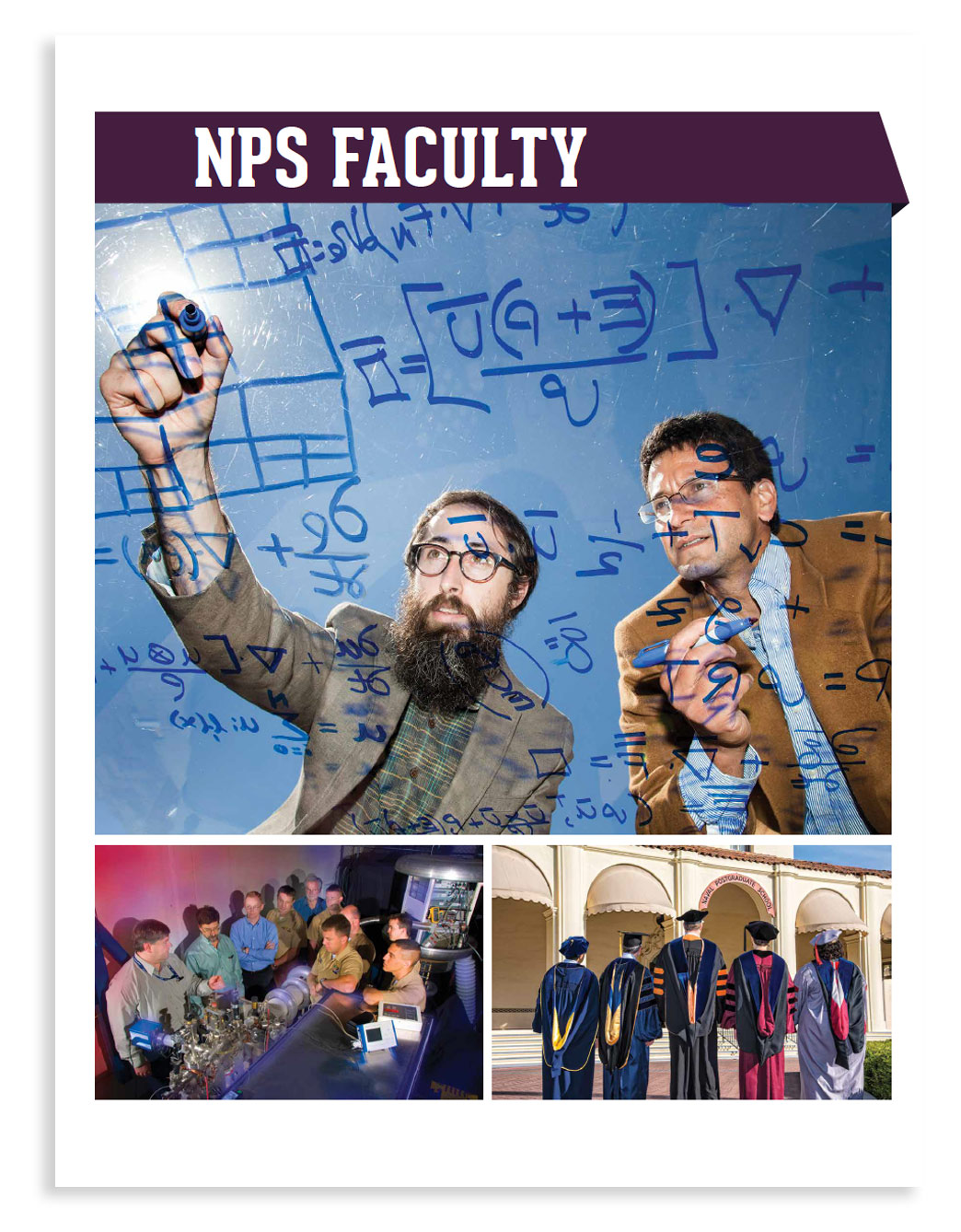 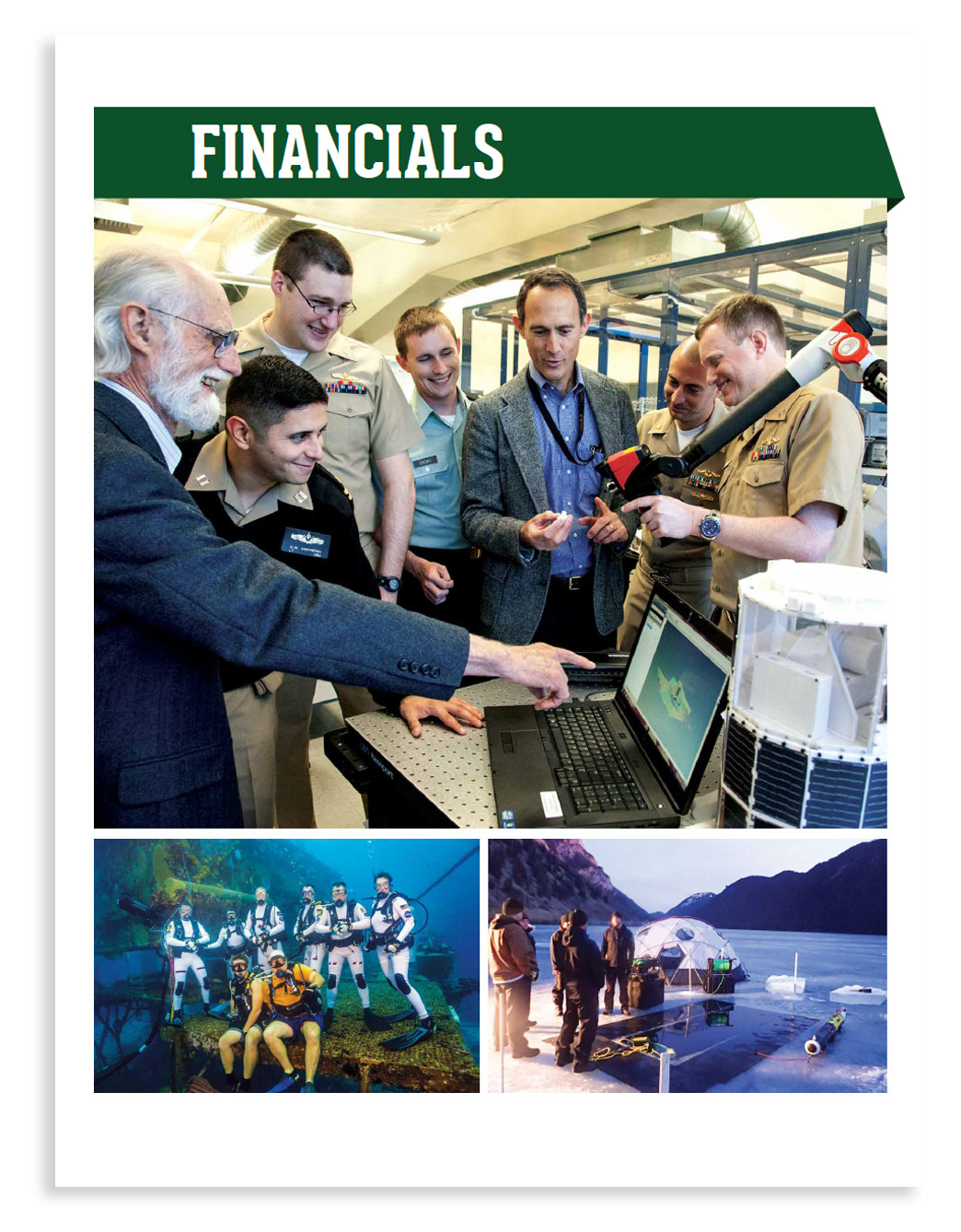 NPS’ faculty and operationally experienced students apply both their expertise and cutting-edge educational programs to research solutions in direct response to key operational problems in all domains. Critical to the warfighter are capabilities and applications of emerging technologie

tactics that awed viewers could potentially pose a threat to warfighters in many warfighting domains.

This past year, NPS professors Isaac Kaminer and Abe Clark emerged as national leaders in the development of a counter-swarm analysis toolbox. Both professors had already spent years studying the analytical foundation for swarm-on-swarm engagements.

NPS is developing the leaders the Navy needs for the future force. I saw students who are developing tangible solutions to key operational problems which are needed in the Fleet. 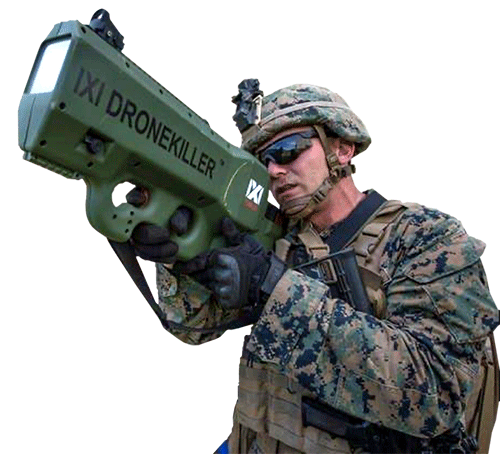 The ability to conduct classified research and education programs in a number of facilities and classrooms makes NPS a very unique institution among its peers. And it certainly equips graduates to be technological leaders, delivering solutions upon their return to the fleet and force.

Making an immediate impact in the Fleet was Lt. Paul Cross. As a 2018 graduate, Cross conducted his NPS research on advancing electromagnetic weaponry at NPS’ Railgun laboratory — the largest of any academic institution. After graduation, he put his education to immediate use at a Naval Warfare Center in Dahlgren, Virginia.

The science, curriculum and personal experiences [at NPS] are unmatched. What I learned via the curricula, faculty and my fellow students positioned me to lead, excel, and make an immediate impact after graduation.

The Naval Postgraduate School continues to be a national leader in Naval innovation, thanks to the unique combination of warfighters, researchers, dedicated partners and a mission to support Navy and Marine Corps priorities. 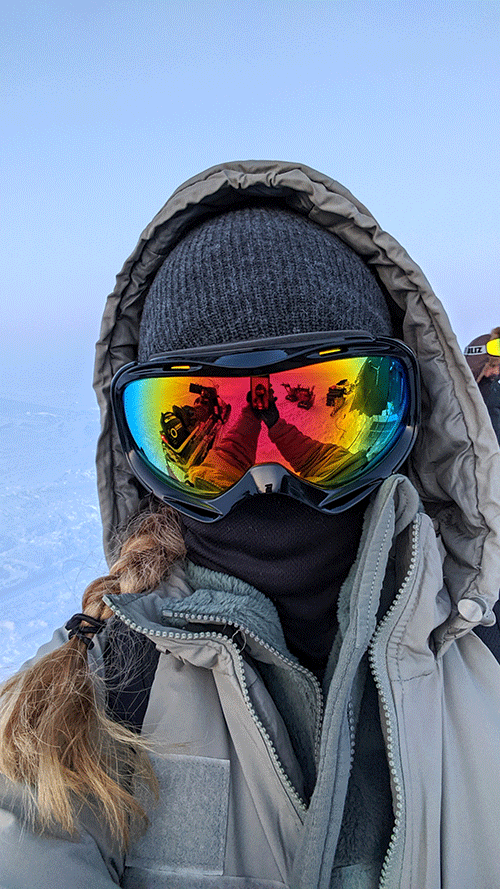 One such example of innovation in a field that supports the broader Naval mission is the university’s research of the changing Arctic environment. On the modeling front, NPS’ activities in developing increasingly accurate and complex models, like the Regional Arctic System Model (RAMS) helps the Navy understand an environment it needs to be in, now and well into the future.

Meanwhile, NPS researchers continue to gain valuable insight into how environmental systems in the Arctic work. Last year, an NPS research team found that there was more life under the sea ice than previously thought, helping climate researchers better understand how much carbon this part of the Earth can absorb.

Advanced education is so important now, and in the future. NPS develops critical thinkers in so many areas, and develops new concepts of operations and capabilities to address the threats in this 21st century in a collaborative and free-thinking way. 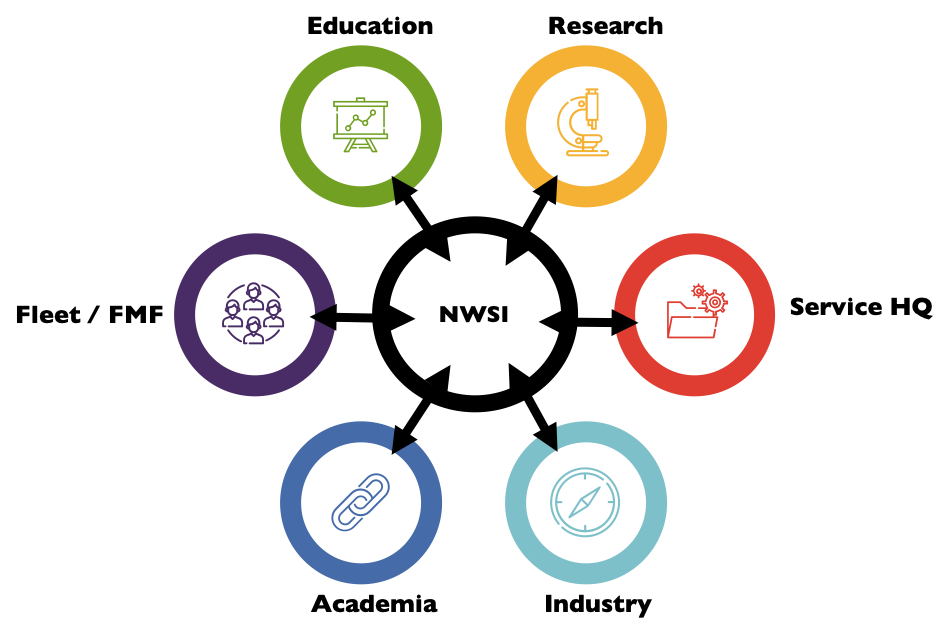 NWSI will serve as an essential portal connecting the Fleet with NPS’ immense talent, resources and research to address the most complex warfighting issues and operational challenges.

In this era of Great Power Competition, the NWSI connection will prove critical in retaining the technological, tactical and cognitive edge necessary to prevail in future conflicts. As competitors continually challenge the U.S. Navy’s control of the seas, new concepts such as distributed maritime operations and expeditionary base operations take center stage.

NWSI epitomizes what we at NPS are seeking to deliberately achieve, and that is the alignment of our work, our research, our education, our students and faculty focused on those things that are important to our warfighters ... NWSI is how we can bring together all that we are here at NPS to Great Power Competition in this Cognitive Age.

The Naval Postgraduate School is continuously adapting and responding to the needs of the Navy and Marine Corps, and the DOD writ large, by conducting applied research and fostering collaboration between faculty, students and partners across defense, industry and academia. 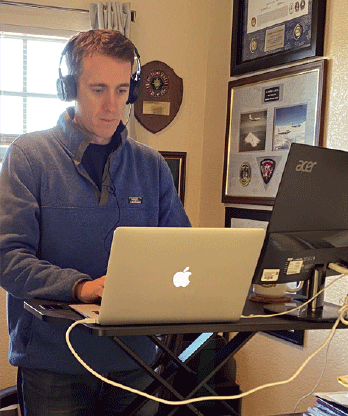 The vast network of NPS stakeholders, research partners and alumni covers the globe and allows for real-time feedback on modern problems, and how the NPS community can work to provide dynamic solutions.

This ability to be responsive was dramatically challenged in March of 2020 when the novel Coronavirus, more commonly known as COVID-19, swept across the country and the globe. With little time to plan and even less time to act, NPS had to adjust accordingly as we entered the beginning of a long, dark tunnel that we continue to traverse with a little more light guiding us. As the school geared up to come together to celebrate another cohort of students evolving into alumni, state-wide ‘stay-at- home’ orders flocked to the tops of newsfeeds.

In less than two weeks, NPS moved all classes, with the exception of classified studies, for the roughly 1,500 on-campus students to a virtual setting using online collaboration tools that are now household names. 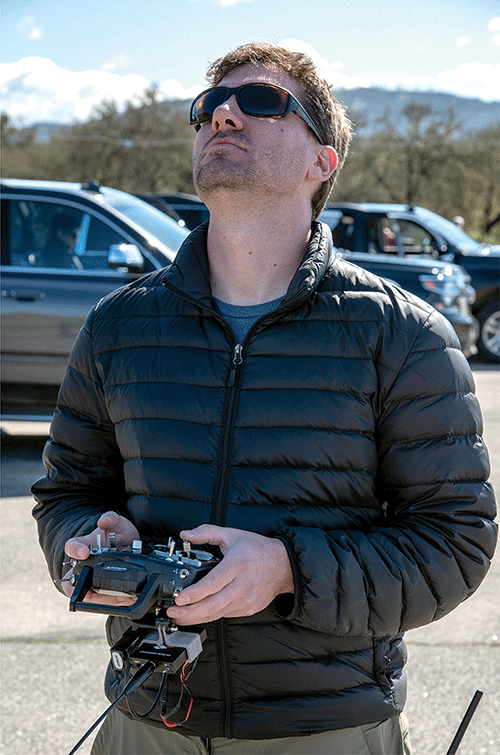 Since 1909, the Naval Postgraduate School has been a national leader in research and education of the cutting-edge, defense technologies of the day. In order to execute this mission, security is weaved into every critical function of mission execution.

Behind its iron fences lies an institution that is uniquely capable of performing classified education and research programs for appropriate communities, essential in order to maintain the nation’s edge in modern Great Power Competition. On campus, there is likely no university in the nation with its faculty and student population more well-informed in operational security, protecting the deep knowledge that is explored at NPS. In addition, some of the university’s small but unique facilities provide a one-of-a-kind environment for secure studies and experimentation.

Decisive advantage at sea will likely go to the power with officers who are better educated, critical thinkers who have mastered the intricacies of their combat systems. The Meyer Scholar program is doing its part to produce those officers.