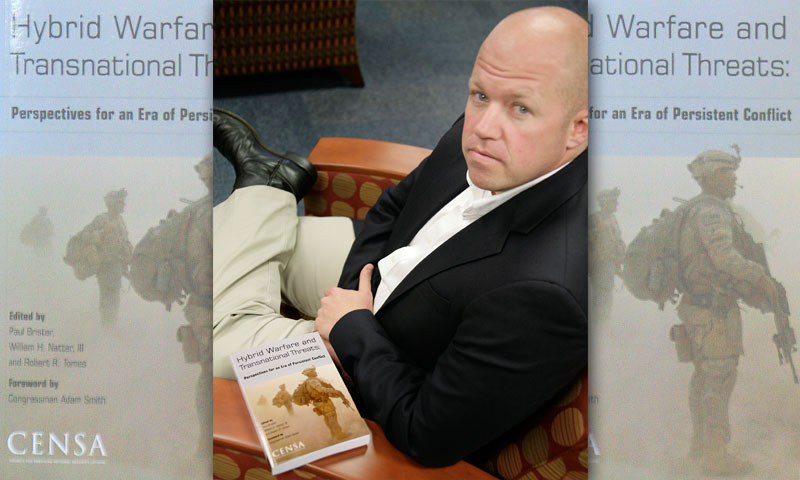 The book is a compilation of essays from a broad spectrum of security professions, from scholars and researchers to military professionals with years of field experience. The book examines new and emerging aspects of the U.S. security environment.

“The book looks at concepts of future warfare, what we can expect and how we can respond to the threats that confront us,” said Brister.

Brister’s chapter, along with the introduction by lead editor Dr. Robert Tomes, sets the stage for later chapters by framing the debate and establishing context for the contributor’s essays. Hybrid warfare is an emerging term within the security community. Proponents of the term claim today’s security threats come from a more diffuse group of actors, thereby increasing the complexity of the security environment and requiring a more resilient and adaptable response from security professionals. Detractors claim today’s security threats are not radically different from unconventional and guerilla warfare of the past, and therefore do not require new strategies or terminology to define them.

“We really get into the concept of hybrid warfare, presenting viewpoints both for and against. We definitely have authors that take both sides of the debate. We explore theoretical, conceptual, and operational aspects of hybrid warfare,” said Brister.

“I’m really just a set-up guy for the rest of the contributors.  My chapter essentially outlines the various sides of the debate that the other authors explore in more detail providing examples from current and historical conflicts,” Brister said of his year and a half long involvement with seeing the book grow from a simple idea to a published manuscript.

The book is designed to frame the discussion for policy makers faced with decision-making on security issues and future structure of the armed forces and other organizations involved in national security.

“This collection of essays highlights the ongoing debate about the way globalization and the information revolution are transforming the nature of war,” said Dr. James Wirtz, the Dean of the NPS School of International Graduate Studies, which houses the Department of National Security Affairs. “The authors explore how all sorts of actors are integrating technology, social networks, and violence to achieve their political objectives.”

The book was published by the Council for Emerging National Security Affairs (CENSA), which is a non-profit research organization that strives to contribute to the national security policy conversation.  The other editors were William H. Natter, III, the former Deputy Under Secretary of the Navy for Plans, Policy, Oversight and Integration and current member of the CENSA Board of Directors, and Dr. Robert R. Tomes, an adjunct professor at George Washington University and board member of the CENSA Board of Directors.