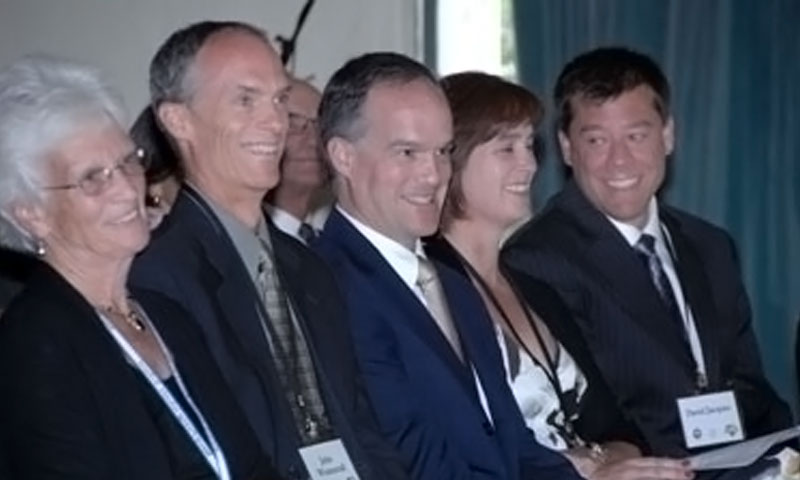 What made Spring 2010 graduation so special was the unprecedented week of pre-commencement activities celebrating the life and achievements of applied information theory and digital communications engineering giant, the late Dr. Jack Wozencraft.

The pre-graduation Enrichment Week included a series of Wozencraft Memorial Educational Fund Lectures by world-renowned experts in the field who knew and worked with the legendary sequential decoding pioneer.

Thomas Reed, former Secretary of the Air Force, Director of the National Reconnaissance Agency and first director of DTACCS, which implemented the World Wide Military Command and Control System (WWMCCS) for secure communications with U.S. strategic nuclear forces, spoke twice on June 8, on the history of nuclear proliferation and the origin and development of Continuity of Government policy.

On June 16, Reed’s successor and second DTACCS director as well as Acting Assistant Secretary for C3I in the Department of Defense, the Hon. Richard Shriver, spoke on the nation’s C3 graduate education program developed at the Pentagon under his and Reed’s tenures and Shriver’s pivotal role in developing and bringing the program to NPS. During his term as head of the agency, Shriver and an aide visited and assessed a number of top U.S. universities where the new program might be placed, and chose the Naval Postgraduate School.

“I was asked by Deputy SecDef William Clements to put together a command and control curriculum that could support classified courses and labs and find the best place in the country for it,” Shriver said. “We looked at top tier schools – MIT, Cal Tech, the Illinois Institute of Technology … and NPS. We had no preconceptions it would land here, but NPS came out as the best choice. By November of 1976, we’d chosen NPS, it was accepted by the Navy, and there were close to 30 billets in the first class.”

Once the location was chosen, Wozencraft took the opportunity to return to the Naval Postgraduate School as the first director of the new C3 graduate education program – its mission was to staff advanced computer-based and networked strategic command, control and communications systems for the joint services. It was then that Wozencraft founded the university’s pioneering interdisciplinary Command, Control and Communications Academic Group and served as Chair from 1977 to 1982. 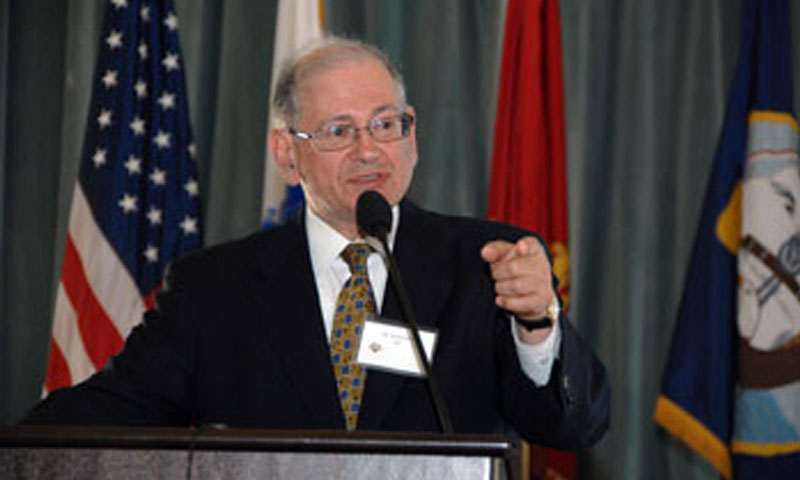 On June 17, Dr. Robert Kahn, widely known as the “Father of the Internet,” now with the Corporation for National Research Initiatives, held an open discussion with faculty and students. Later that morning, Dr. James Babcock, Principal Deputy Assistant Secretary of Defense for C3I, founder of the Washington Intelligence Division of MITRE Corporation and an elected MITRE Fellow, and Shriver spoke on post Cold War intelligence challenges and the importance of knowing adversaries’ true capabilities.

Recalling the memorial during graduation ceremonies the following day, Oliver said, “Yesterday, Dr. and Mrs. Jacobs; their colleagues and friends; students, faculty and staff from our school; and the Armed Forces Communications and Electronics Association Monterey Bay Chapter honored the late Dr. Wozencraft, Mrs. Wozencraft and their family with a rededication in memoriam of his Distinguished Professor Medal and a posthumous AFCEA Lifetime Achievement Award for his pioneering work in developing sequential decoding and his many exceptional contributions to military operations in the field of command, control, communications and intelligence – only the eighth such award in AFCEA’s history,” Oliver told the assembled graduates in King Auditorium. Wozencraft’s wife, Fran, who had received the honors on his behalf, their sons Colin and John and daughter Katie, and extended family looked on from a special section for honored guests in the front row.

“Many of Jack Wozencraft’s academic and professional colleagues came to campus to share the positive impact he had on their lives and their careers, many of whom are considered the ‘brain trust’ of communications engineering and information theory in the United States if not the world,” Oliver continued. “And crowning the memorial was a personal message from former President and Mrs. Bush paying tribute to their friend Jack Wozencraft and all those who came to honor him.”

Kailath and Forney were both Wozencraft’s doctoral students at MIT. His first, Kailath, had been on campus in March to present a copy of Wozencraft’s ground-breaking book, Principles of Communications Engineering, to AFCEA award winner Lt. Nathan Geisinger, inscribed with an inspirational message by co-author and June 2010 commencement speaker Dr. Irwin Jacobs, current Chair of the National Academy of Engineering.

“Jack’s doctorate thesis on sequential decoding was a major contribution to communications engineering as the first general error-correcting technique that could be implemented in practice,” said Fano, Ford Professor of Engineering Emeritus at MIT. 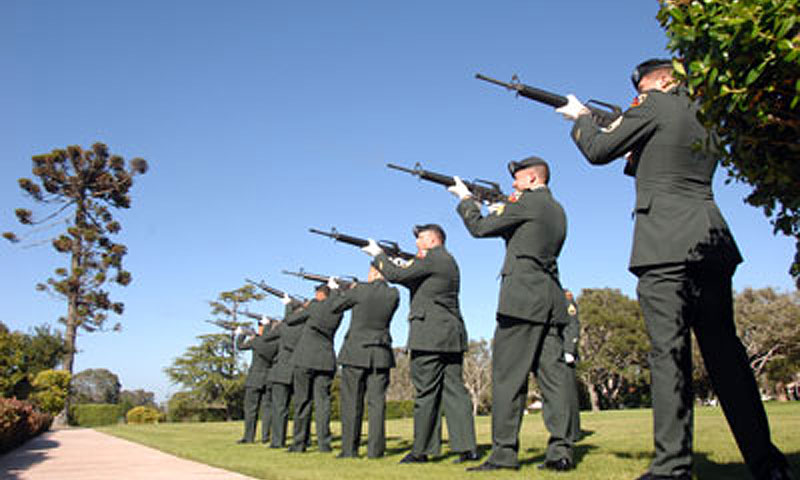 The memorial ceremony ended with a special joint Navy and Air Force Choir from the nearby Defense Language Institute singing the Army hymn, Eternal God of Our Fathers, a benediction by NPS chaplain Lt. Cmdr. Thomas Statler, and a seven-person rifle 21-shot salute on the lawn below the veranda outside the ballroom followed by TAPS from a former Army Band bugler now at DLI. Dr. and Mrs. Irwin Jacobs hosted the reception for all those who attended.

At an elegant dinner in the LaNovia Room the next evening, Wozencraft’s son, Dr. Colin Wozencraft, rose in his father’s place. “We want all of you to know how incredibly privileged and honored we feel as a family to the Naval Postgraduate School, and the incredible sense of humility we feel not only at all the very important work our father did, but the large number of his colleagues and friends who came all this way to share with us how he touched and transformed their lives and careers. To be in the presence of so many who knew my father, and to have this great opportunity to also be able to tell them about him, is beyond words.”

On behalf of the Wozencraft family and everyone at the event, University Librarian Eleanor Uhlinger presented Larry Reeves, president of the Monterey Bay AFCEA Chapter, with a tray emblazoned with the image of the Fresnel lens from the Point Sur Lighthouse for being the “guiding light” of the Wozencraft Legacy Project, spearheading the week-long series of events celebrating the former Dean’s life and work, and the idea to invite his co-author, Dr. Jacobs, to be the graduation speaker.

Uhlinger and her staff at the Dudley Knox Library, including memorial master of ceremonies and special collections manager John Sanders, worked with Reeves on a nine-month quest to research his background and history before and at NPS. Reeves thanked the Wozencraft family for their participation, his friend Dr. Jacobs for agreeing to be the commencement speaker, and Dr. Thomas Kailath, “who generously sponsored the dinner.”

In April, AFCEA announced its intention to re-name all its NPS graduate awards in honor of Wozencraft. The week before graduation, at the Spring 2010 Graduation Faculty Awards ceremony, the first two renamed awards were presented -- the AFCEA John McReynolds Wozencraft Award for Academic Excellence in Joint C4I, which went to Lt. Jacob N. Crisp; and the John McReynolds Wozencraft Electrical and Computer Engineering Academic Honor Award, won by Lt. Kostantinos Spyridis of the Hellenic Navy.

One speaker at the Memorial service said Wozencraft must be looking down at all his family, colleagues and friends. “Our dad would have been embarrassed at all the attention,” said his son Colin, “but he would also have been happy at the pleasure others received in doing this for him, and in their achievements.”

Wozencraft may have been prone to shy away from the attention, but apparently he was destined to excel from early on. In perhaps the most fitting of the memories recalled by Wozencraft’s various friends and colleagues was that of West Point classmate retired Col. Bernie Pankowski, who dug up the yearbook from their 1946 Military Academy class titled “The Howitzer.”

The quote inside reads, "Wherever men associate, there is always one who, in all respects, stands head and shoulders above everyone else. Such a man is Jack, a student of the highest possible caliber of all subjects scientific and social, an exceptional athlete, skillful writer, and a fluent speaker. He possesses an agile mind which masters the theoretical as readily as it handles a situation requiring common sense."

Indeed, in an environment where great minds shape future great minds, Wozencraft’s legacy is one worth remembering and celebrating.