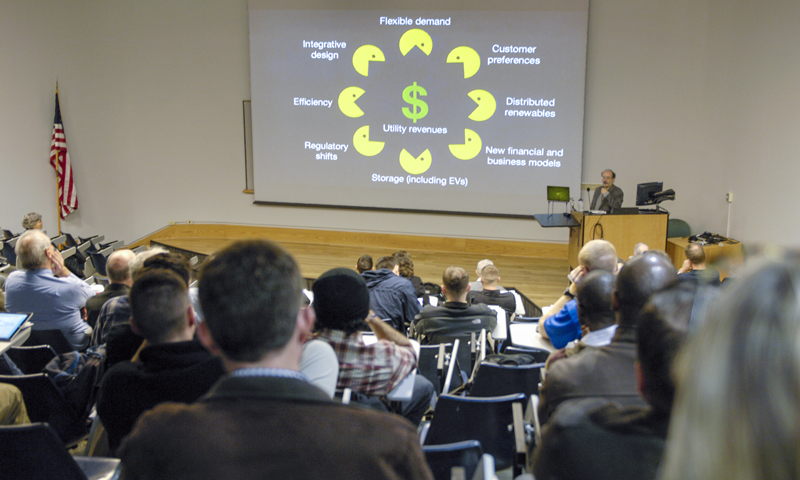 Rocky Mountain Institute CEO Dr. Amory Lovins lectures to NPS students, faculty and staff on the rapidly changing environment of the energy industry in Glasgow Hall, Dec. 4. His lecture, “Disruptive Oil and Electricity Futures,” focused on several factors that are forcing the oil, gas and electricity industries to change their business models.

Rocky Mountain Institute CEO Dr. Amory Lovins offered NPS students, faculty and staff his views on the rapidly changing environment of the energy industry, during the latest Defense Energy Seminar in Glasgow Hall, Dec. 4. Lovins compared the impact of today’s renewable energy sources on the oil, gas and electricity industries, with the impact of the invention of the light bulb on the whaling and kerosene industries of more than 150 years ago.

“Back in 1850 when there were no cars and no oil wells, ships ran by sail and most homes were lit by oils extracted from whales … making whaling America’s fifth largest industry,” said Lovins. “In a single century it grew to world dominance, and then suddenly disappeared.”

Strong demand and global hunting made whales shy and scarce, driving costs higher as fleets got bigger albeit less productive. But when Edison’s light bulb hit the marketplace, the whaling industry eventually lost more than 80 percent of its lighting market because it was running out of customers, not running out of whales.

Lovins has been an innovator and practitioner in energy and its links to security, development, environment and the economy for more than 40 years. In 2009, Time magazine named him one of the 100 most influential people in the world, and Foreign Policy pinned Lovins as one of the 100 top global thinkers.

In the energy sector, Lovins explained, falling prices may create great challenge, but it is ultimately the shift in demand that is forcing change in the industry. Energy efficiency plus structural shifts in the economy have changed today’s energy demand significantly.

“In the past five years, the meteorite strike of photovoltaics has fatally disrupted utilities by making solar power cost less than gas lines,” said Lovins. “Wind power is so cheap that it makes old coal, gas and nuclear plants shut down, as [they are] uneconomic to run.”

Added Lovins, “Oil companies are even more at risk for market competition than from climate regulation.”

Lovins continued to discuss how breakthrough design methods in business and financial models are establishing solid foundations for emerging energy industries. They seek to reinforce themselves with innovative policies, crowdfunding and crowdsourcing, and new development patterns, all of which are able to keep pace with shifting values and the Silicon Valley’s culture.

He emphasized his point with a question, “So, is an oil company’s competitors other hydrocarbon companies, or is it people?”