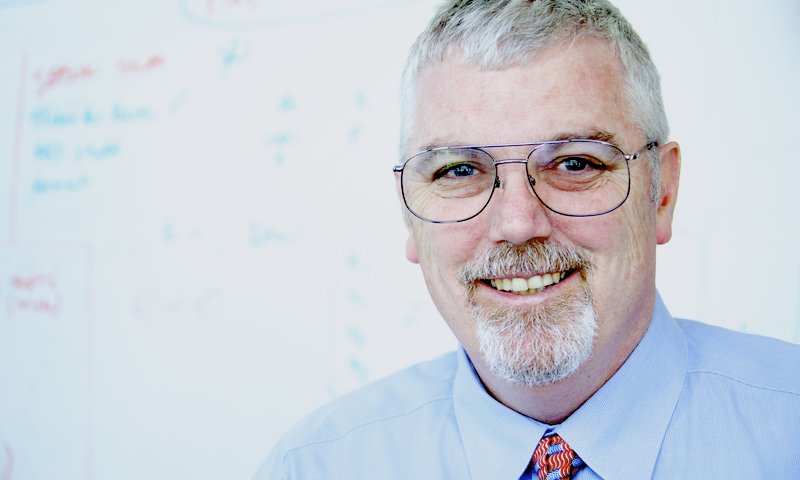 NPS Professor of Systems Engineering (SE) Dr. David H. Olwell is moving on to his new position as Dean of Engineering at Saint Martin's University in Lacey, Washington, but colleagues say he leaves a lasting legacy on both the institution, and the systems engineering discipline, here at NPS.

Naval Postgraduate School (NPS) Professor of Systems Engineering (SE) Dr. David H. Olwell will soon be settling in to his new position as Dean of Engineering at Saint Martin's University in Lacey, Washington, but colleagues say he has made a lasting legacy on both the university, and the systems engineering discipline, here at NPS.

Olwell says his accolades and accomplishments are all extensions to how he views his purpose to teach, and the relationship he has with his students.

“I like my students, and I think they like me, we value and respect each other as professionals,” Olwell said. “I try to help them achieve their full potential, so they can fulfill their goal of serving our country to the best of their ability, and they flourish.  I have enjoyed being the primary thesis/capstone advisor to 88 students and the second reader or co-advisor to nine others.

“I learned to teach from great mentors like Frank Giordano and Bill Fox, and when I was on the faculty at West Point, and that has served me well. I tried to help my colleagues as I’ve been helped,” he added.

Over the years, the Navy has placed significant value on the study of systems engineering, and Olwell has been deeply involved in evolving the university’s program over the years.

“When SECNAV [Donald C.] Winter called upon NPS in 2007 to help lead the revitalization of the systems engineering workforce in the Navy, we were positioned and we responded by expanding both the breadth and reach of our educational and research programs,” said Olwell.

“Working with my colleagues, especially Bob Harney and Chuck Calvano, who had the initial vision for systems engineering at NPS, and Wally Owen, who has been our strong outreach champion, and partnering with other departments at NPS, we built a set of programs that grew from a few dozen students to over 500 students per year,” he added.

As he looks back on his time at NPS, Olwell says his colleagues aren’t the only influences on his 26-year career; his love of country played a big part as well.

“For the 26 years I have been teaching, I’ve always kept a sign outside my office, a quotation from Douglas McArthur. It reads, ‘Your duty remains fixed, inviolate. It is to win our nation’s wars,’” said Olwell.

“Since 1974, it has been my life’s work to contribute to that effort of winning our nation’s wars. I consider my teaching years as fighting the very deep battle, helping to shape and strengthen those who will shoulder the responsibilities of our future national defense,” he added.

As he departed NPS for new challenges outside of the DON/DOD, he expressed thanks to the colleagues who have helped him along the way.

“Forty years in the uniformed and civilian service is a long time; it is time to move on,” he said. “As I retire from the Navy, I am excited by this new challenge and I am grateful for the friends and colleagues who have helped me along the way …  you have made this opportunity possible.”