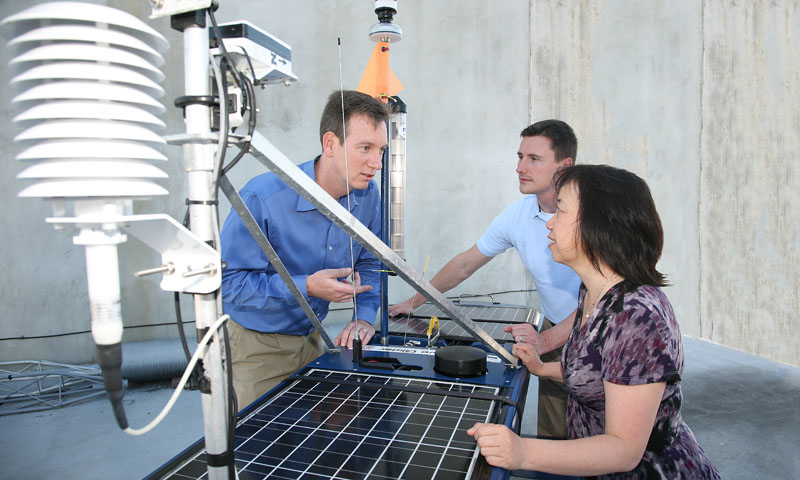 “The electromagnetic (EM) spectrum is an unseen but integral part of our daily personal lives. And, it is essential to our military operations. Failing to use it effectively will be the difference between victory and defeat … To command it, we need the ability to monitor and be aware of the environment, manage our emissions, discretely communicate, find, track and defeat threats, and conduct attacks as needed," said Greenert.

Wang is lead principle investigator of the CASPER team consisting of researchers from six universities. She echoes Greenert’s sentiments and offers insight into NPS’ research of the EM spectrum.

“The need for precise prediction of the EM environment becomes more of an issue as Electromagnetic Maneuver Warfare (EMW) grows as a major warfighting component in the current and future Navy,” said Wang. “This is the main reason that the Department of Defense [DOD], particularly the Office of Naval Research [ONR], supports extensive research efforts such as CASPER.

“NPS Department of Meteorology faculty and students have been actively involved in this research area for years and will continue to be leaders in this field of important Navy applications,” continued Wang. “CASPER and similar research projects give our students the opportunity to explore highly Navy-relevant research topics, which I think is important to their educational experience at NPS.”

EM wave propagation is not for the faint of heart. The term refers to how radar signals and other wave frequencies travel in the atmosphere, and can result in very complex interference and bending patterns.  For example, when conditions are right, the radar signals may be trapped in a wave-guide and focused along a path well beyond its normal range, a propagation phenomenon usually referred to as “ducting”.

The DOD is spending nearly $7.5 million on the CASPER study – a number indicative of its relevance to current naval operations. Wang notes that recent technological developments in the field of meteorology have also created greater opportunities to study the EM propagation in the maritime atmosphere.

“CASPER is timely also from the science perspective because of emerging measurement technology and innovative numerical modeling approaches, which promise breakthroughs in some of the critical science issues hindering accurate prediction of EM propagation in the atmosphere,” she said.

Wang leads a diverse team, joined in her efforts by researchers from Ohio State, Notre Dame, UC Irvine, Oregon State University and the University of Minnesota as well as contributors from the Naval Research Laboratory, the Naval Surface Warfare Center and the Navy’s Space and Naval Warfare Systems Command.

Additionally, CASPER will draw on the operational and academic experience of active-duty, student researchers at NPS.

“When you look at a fish in the water, you see it in one spot, but it is actually in another, that’s because light bends as it passes from water to air,” explained Cherrett. “This change of medium has a greater effect on light than temperature and moisture variations in atmosphere have on radar signals, but the cumulative effects over distance become significant enough to affect EM sensor performance.

“In addition to just being good science, I think the Navy needs work like this to help clear the fog of war. Understanding the environment can enable you to negotiate a tactical high ground or at least react to the conditions by understanding how they will impact your people, platforms, and systems,” continued Cherrett. “Inversely, being unaware of the environmental impacts of weather on EM propagation can jeopardize missions and lives as good planning can default to the luck of the weather.”

In a sign of the Navy’s growing interest in EM research, Lt. Travis Wendt recently began study of EM propagation at NPS after years of research on tropical cyclones. He is changing gears in response to increased demand for expertise in the EM spectrum. 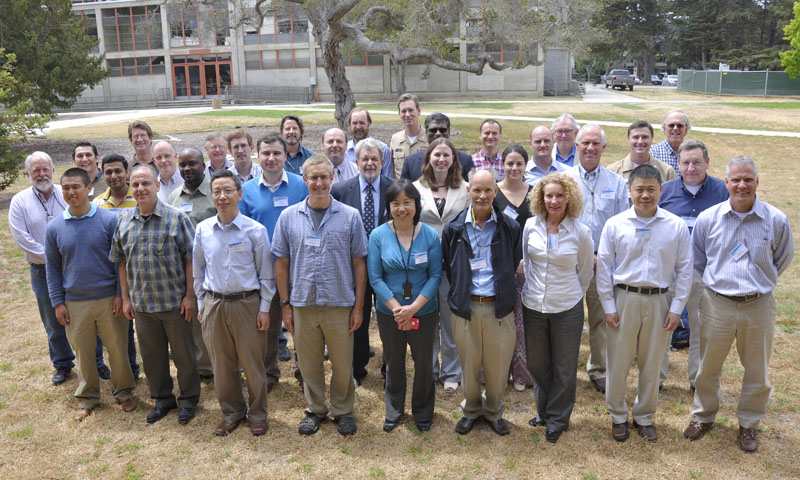 NPS Department of Meteorology Professor Qing Wang, front center, is pictured with the multidisciplinary group of scientists and researchers participating in the Coupled Air-Sea Process and EM Refraction (CASPER) program, August 5. The group traveled to NPS to kick off the Office of Naval Research sponsored Multidisciplinary Research Initiative with a series of meetings and briefs.

“Electromagnetic propagation will play a vital role in the future of maritime security. To this end, the Navy would like to better understand the atmospheric boundary layer and how it affects the propagation of electromagnetic energy,” said Wendt. “EM research offers Ph.D. students like myself the opportunity to make a real scientific contribution in an exciting and operationally-relevant field.”

Currently Wang and her colleagues are in the process of preparing and deploying a host of high-tech sensors capable of quantifying EM propagation in its environment, throughout the various layers that stretch from the stratosphere to the ocean floor.

These high-tech craft are necessary because in order for CASPER to successfully meet its research objectives, researchers will have to look carefully at, amongst other things, the physics of the marine surface layer and ocean wave fields that will provide the data necessary to model EM effects.

“We can simulate everything, but is it real? That’s what we will be exploring over the next several years,” said Wang.

If successful, CASPER modeling may lead to an understanding of seemingly random air-sea processes and to enhanced sensor performance as well as numerical weather and ocean prediction capabilities.

Drs. Dan Eleuterio and Steve Russell with ONR are the CASPER (Multiple University Research Initiative) MURI Program Managers. They spoke about the long road ahead.

“This is an exciting opportunity to address a long-standing basic research challenge to naval operations. The multidisciplinary expertise of this team shows great promise towards advancing our understanding and prediction of EM propagation in the maritime environment,” said Eleuterio.

Russell insists that that this level of urgency is important, because in understanding EM propagation effects, researchers may be able to protect the lives and equipment of U.S. service members.

“In addition to questions of weather, we are helping operators to understand the vulnerabilities of their platforms,” said Russell. “[It is important for us to understand] how much energy is getting between sensors and targets … especially in regard to emerging threats.”

Wang and her colleagues hope that their efforts to measure and model the effects of the atmosphere and ocean surface on EM propagation will answer questions like these. But the challenge before the CASPER team goes beyond simple measurements of EM energy passing through the medium in which the Navy operates. It involves understanding and eventually predicting the disruption of EM energy that is caused by weather and other phenomena.

“The CASPER approach will include new modeling capabilities, evolving toward highly accurate simulations of turbulent eddies in the media [ocean surface and atmosphere], and lead to a deterministic description of the wave and turbulence fields,” said Wang.

A formal review of the research initiative will be conducted in 2016. At that review, Wang will be asked to stand in front of an Office of the Secretary of Defense (OSD) panel and brief the progress of the research team, and the project. With luck, and a great deal of collaborative work on the East and West coasts, she hopes to be able to shed light on the many complicated processes that the Navy must understand to maintain its strategic edge in the field of EM propagation.