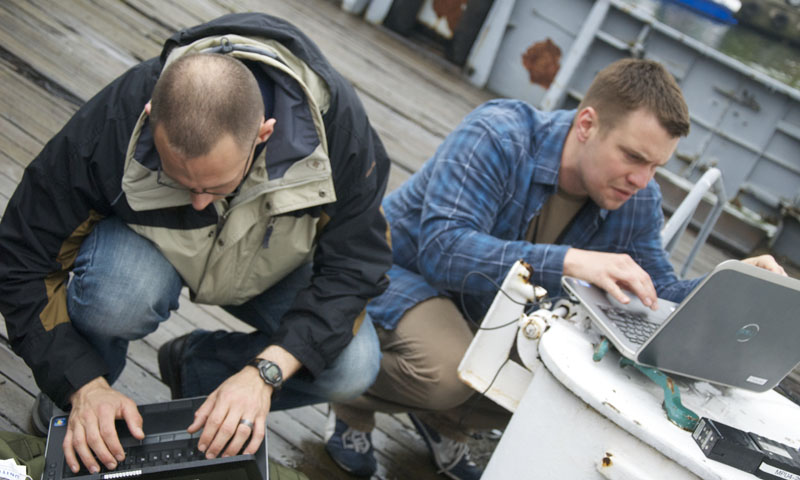 An eclectic group of Naval Postgraduate School (NPS) students has been working with International Fulbright Scholar, NPS Department of Information Sciences Professor Alex Bordetsky, on a series of initiatives tied to university-led research into the use of mobile ad hoc networks used in the sensing, identification and interdiction of Weapons of Mass Destruction (WMD) during Maritime Interdiction Operations (MIO).

The students’ work shares a tenuous common denominator, but their association with Bordetsky’s research is indicative of the manner in which NPS research not only supports student educational efforts, but also supports larger initiatives that offer near immediate value to the Navy and its sister services.

“My experimentation is about taking an approved RSE kit that provides operators with the best data in the quickest time possible and using it in a MIO setting with limited band width,” said Sinsel. “

“What I would like to do is leverage existing technology to implement a secure and efficient way to transmit RSE data wirelessly from the boarding team all the way back to the distributed analysts, wherever they may be, without having to rely upon larger vessel based networks.”

Bordetsky has been working on mobile network solutions for some time, what Sinsel contributes to the effort is not a new technology, but rather the ability to adapt existing technology to mobile ad hoc networks in innovative ways.

"My work is not about development, it’s about implementation not creation. I want to be able to use existing technologies in conjunction with Wave Relay Radios,” said Sinsel.

Wave Relay Radios are important to both Sinsel and Bordetsky’s work because in addition to providing voice communications, they produce a wireless signal that allows them to develop networks on the move – a capability with the potential to greatly enhance the collection and analysis of evidence during critical boarding and other maritime operations.

“In a MIO setting what I want is the ability to send operators out with these radios, once deployed, they become a [wireless] node and based on where they go, I am able to constantly change the topology of the network,” said Sinsel. “I can use a hastily formed mesh networks technology to create an end-to-end wireless solution that does not rely upon outside networks.”

Bordetsky and his students have been able to create mobile networks in some very non-traditional settings. They have created networks by deploying radios with Navy divers and there are even plans to create networks of radio-equipped Special Forces teams in free-fall during High Altitude Low Opening (HALO) jump operations.

Sinsel envisions a time when groups of SOF operators will be able to use his work to rapidly exploit evidence during boarding operations end then get that evidence to people who can analyze it while the team is still on the scene.

“They can use the data gathered from the site to determine that the mission is not quite done and needs to change,” said Sinsel. “We can help them to make that decision by getting evidence back to distributed experts for reach-back and exploitation.”

Marine Corps Capt. Robert Schulz, an MP by trade with a background in communications, is exploring the possibility of using remote biometric collection technology to capture fingerprints, iris scans and other important biometric data. “Ideally, I would like to explore the feasibility of using UAVs and other devices that could potentially zoom in on a suspected terrorist and capture his biometrics,” said Schulz.

“If I can break ground with this and develop the algorithms necessary to use zooming technology to capture biometrics, at a distance, then I may incorporate other technologies such as Ultra-Wide Banned technology that can be used to do things like see through walls,” continued Schulz.

According to Schulz, his success will rely upon his ability to bring disparate technologies together and will require changes in the way data is currently collected, but he is hopeful that those changes will increase operator safety and lead to better biometric collection.

“If you can collect data at a distance, our operators will know what they are getting into before they even arrive,” said Schulz. “This kind of information would enhance situational awareness and allow us to take a more proactive approach.

“I want to approach this in a way that is focused on getting the guy on the ground relevant information in a timely manner,” continued Schulz. “If [while searching a building] I know who is there and what I am getting into, that will give me, as an operator, greater confidence in my ability to accomplish my mission.”

As with Sinsel’s and Bordetsky’s broader body of work, Shulz ultimately is hoping to not only collect data from a distance, but to share that data simultaneously with subject matter experts that can help teams to exploit the data on the move.

“I wrote the application on my own after taking some classes on Android software at NPS and a course online,” said Urban. “I had the computer background, I just needed to update my knowledge to be able to use modern design tools.”

Urban’s research is aimed at sharing mission essential data in a streamlined format that is user friendly.

“It’s about streamlining the process. When a SOF team deploys somewhere they have certain reporting requirements after they hit the ground, those reports take up multiple pages,” said Urban. “What I want to have is a direct link that gives more than just a grid location, but rather offers information recorded on the spot and is able to be viewed by mission planners without their having to read through pages of reports to get what they need.

“We had other visualization tools, but there was kind of a disconnect between where that information was collected and when it was uploaded into a computer, it wasn't a streamlined format,” continued Urban. “This is something that is immediately mission capable for the force … It’s about the concept, we are trying to modernize on as many fronts as possible in the SOF community.”

For Bordetsky, who has traveled all over the world to refine his ad hoc networks and MIO enablers, student researchers are valuable commodities.

“Student research provides a very unique contribution to our experimentation-based research. Being experimental in its nature, this type of applied research relies heavily on human-machine interaction at the tactical networking edge,” said Bordetsky. “Our student’s operational expertise produces unique patterns of human adaptation, together with systems integration solutions that are invaluable.