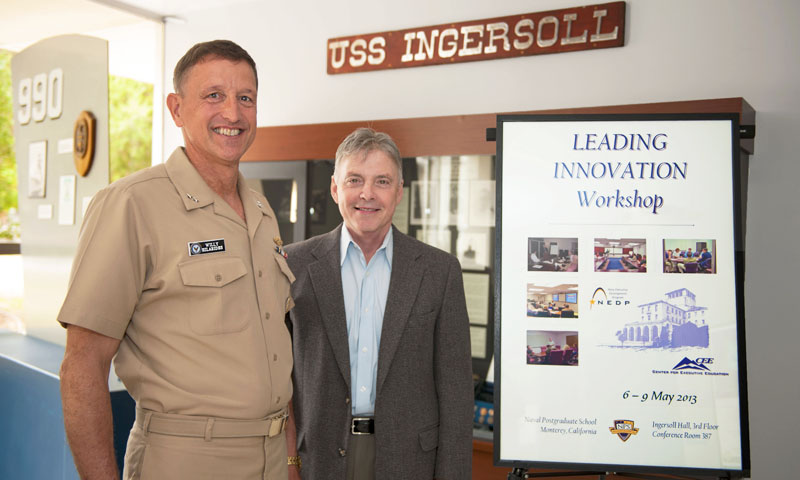 Future Commander of the Naval Sea Systems Command, Vice Admiral (sel.) William Hilarides and Leading Innovation Course Program Manager, Dr. Neal Thornberry, take a moment to pose for a picture in the Naval Postgraduate School's Ingersoll Hall, May 9. Hilarides attended the course as a speaker for flag officers and Department of the Navy civilian senior executives to encourage innovation in the Navy.

“But we’ve always done it that way.”

It’s a phrase that’s expected to be used in an organization with as much history as the United States Navy, but service leadership is dedicated to end that frame of mind by fostering an environment that encourages innovation.

The Naval Postgraduate School’s Center for Executive Education (CEE) provided a four-day course to flag officers and Department of the Navy civilian senior executives, May 6-9, entitled “Leading Innovation.” The course is designed to provide Navy leaders with the skills and mindset to encourage innovation as it relates to organizational success in the Navy.

Innovation is not a new idea for the Navy. In 1986, an 80-year-old retired Rear Adm. Grace Hopper said, "I always promise during my talks that if anyone in the audience says during the next 12 months, 'But we've always done it that way,' I will immediately materialize beside him and haunt him for the next 24 hours and see if I could get him to take a second look."

The Navy Executive Development Program (NEDP) was created to develop senior leaders and their strategic level of execution beyond operational aspects of senior leader development. The NEDP requires senior leadership at the flag level to take a number of courses to ensure their development as an effective leader. Lt. Cmdr. Matthew Beaghley works with Flag Matters to ensure that flag officers are meeting those expectations.

“There’s a couple of courses that are the core essentials for all flag officers to go to,” Beaglhey said. The Leading Innovation workshop is one of them, he added.

“The course gets the flag officers to critically think about the organization by taking a step outside for a few days. While understanding what the limitations and constraints are, they look for innovative ways to create more value within those constraints,” Beaglhey continued. “So, by looking at how other companies are doing business and seeing how things may apply, there may be an opportunity.”

Dr. Neal Thornberry, Leading Innovation Program Managerr, developed the course five years ago and brought it to NPS in 2011. “The course started out as a bi-annual event but due to increase of demand we bumped it up to three-times a year,” Thornberry said. “This year we only have one scheduled due to budget cuts but we have three courses scheduled for next year.

“The term innovation is overused but very few people know how to utilize it and how to make it happen,” Thornberry said. “We’re tying to get them to understand innovation as a tool and not a destination. You don’t arrive at a town called innovation; you have to know what the intent is. So, we’re here for about three and a half days trying to expose them to best practices.”

The group was taken to Silicon Valley as a part of the course to see how leading technology companies apply innovation in their rapidly-changing industry.

“We visited Google, IDO and VMware, and we learned about how those companies began, the corporate culture, and the expectations that the admirals can take,” Beaghley said. “They can bring it back to Navy to figure out a way within the government bureaucracy to keep it fresh, new and innovative – to keep it progressing forward.”

The course utilizes an eclectic collection of teaching methods. For the most part, the course is interaction driven but Thornberry says some presentation is necessary.

“I present concepts because I’m giving them information they may not have,” he said. “We also utilize case studies. Case studies are effective in talking about innovation in realistic terms. It gives leadership an opportunity to see that innovation can and does happen in the Navy and it shows them how.”

CEE Acting Program Director, Winli McAnally, agrees that it’s important to provide real scenarios to the course to achieve the goal of the course.

“Participants will be challenged to broaden their thinking process through exposure to new ideas in the Navy,” she said. “The course is designed to develop a cadre of flag officers able to build and sustain innovative Navy organizations within a business and organizational context.”

Initially the course was met with some pushback, Thornberry said. “There was a time in the beginning that there was a lot of cynicism about business classes because these are warfighters. I think we’ve gone way beyond that now. They’re very keen on going to Silicon Valley. They want to see what private companies are doing. When you’re used to an insular culture, you don’t have a lot of opportunity to look outside.”

NPS’ MOVES Institute has developed a platform that has made it easier for leaders to facilitate a culture more open to new ideas. The open innovation web-based platform, coined MMOWGLI for Massive Multiplayer Online War Game Leveraging the Internet, was developed to crowd-source ideas, and was presented to the class as a definitive tool for innovation.

“Hopefully these leaders will have access to MMWOGLI when they go back to work,” Thornberry said. “MMWOGLI could allow them to take a challenge, throw it out to their people, and use the NPS-developed platform to crowd-source ideas. It’s a sophisticated tool with security that protects the data and concepts. We’re opening their eyes to not only the concept of innovation, but the technology that gets all of the ideas on the table.”

But Thornberry notes that CEE’s Leading Innovation workshop is charged with not only giving leaders the tools it takes to be innovative, the course was created to inspire.

“We don’t ask these leaders to have the brightest idea of the bunch,” Thornberry said. “That’s not important at this level. What we ask is that they create a culture amongst their people to foster innovation and good ideas that haven’t necessarily been used before.

“We want them to not just launch the ship and say, ‘Go innovate!’ We want them to build value for it, and make sure that they give feedback to people who are involved on it, to show them it’s important,” he added. “It’s not easy in a lot of organizations to say ‘Go innovate,’ because it’s easy to kill new ideas. It takes very attentive leaders who are passionate about it. It’s not enough to be strategic … You have to have some tactics on how to get those ideas on the table and then lead them into happening.”