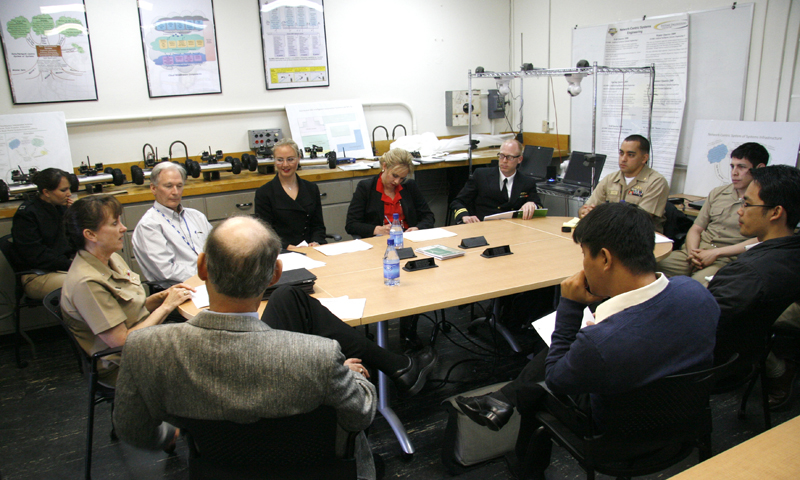 When Naval Postgraduate School (NPS) Interim President Rear Adm. Jan E. Tighe spent an afternoon discussing information dominance and information warfare (IW) with a small group of systems engineering students and faculty, she spoke not on her experiences as NPS’ senior leader, but rather in her experiences as a senior IW officer. Tighe was, in fact, the first female flag officer in the IW community, and the first IW flag with a doctorate.

The session allowed students to glean an insider’s perspective of operations relevant to their current course of study from a senior officer who has previously served as a leader in the Navy’s information superiority realm.

“Having Admiral Tighe come speak and field questions in our smart cloud system of systems course was a unique opportunity to interact with one of the main stakeholders for this system,” said Lt. Cmdr. Hector Ojeda, a student in attendance at the roundtable discussion. “The Department of Defense and the Navy are rapidly trying to implement a cloud system strategy but the cloud concept itself is still being developed.

“As we continue to learn throughout our coursework, it is important to understand and consider the thoughts and knowledge of those stakeholders that are more familiar with this work,” added Ojeda.

The roundtable discussion allowed Tighe to share with the gathered students and faculty on her experiences working on various staffs, including her time as director, Decision Superiority on the OPNAV staff and deputy director of operations for U.S. Cyber Command.

“Admiral Tighe's position as the director of Decision Authority N2/N6 allowed her to provide us with real-world insight on some of the problems that the Navy is facing with its cloud strategy,” said Ojeda.

“The meeting with Admiral Tighe inspired student interest and broadened their horizons both professionally and academically,” said Goshorn. “It was very important for our students to participate in an interactive discussion with a primary source on the subject.”

“The topic of smart cloud system of systems is of paramount importance across Department of Defense and Department of Navy senior leadership,” said Goshorn.

In addition to validating theories discussed in the classroom, the gathering spurned growth and enthusiasm from the students participating.

“Before the session we had three students who were still undecided on their thesis topics,” said Goshorn. “As a result of meeting with Admiral Tighe and the discussion that ensued, all of the students participating have now developed thesis topics.”

For Ojeda, the meeting provided direct insight into his specific course of study at NPS.