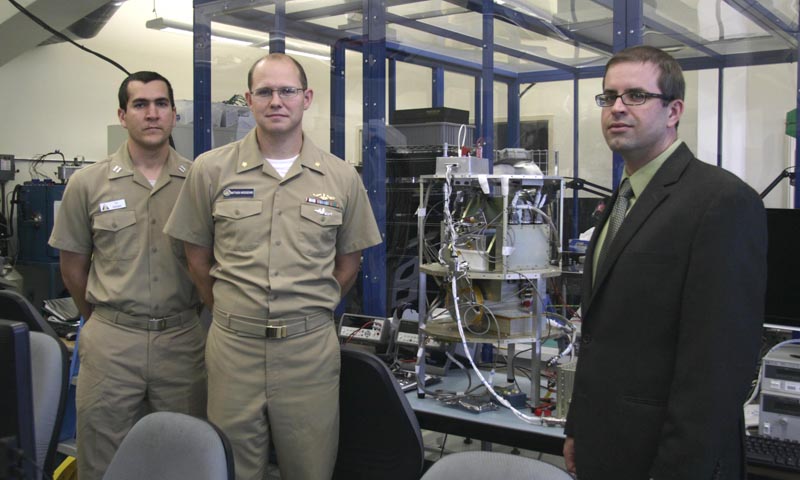 Naval Postgraduate School (NPS) students Lt. Eric Kinzbrunner and Lt. Cmdr. Matthew Argenziano are in the midst of their research theses in the university’s Graduate School of Engineering and Applied Sciences. And with the assistance of their advisor, Research Assistant Professor Mark Karpenko, the two space systems students may just have an immediate impact on NASA’s deep space observation satellite, the Kepler Spacecraft.

“Satellites and space systems engineering are critical to our missions,” said Argenziano. “It improves our effectiveness and keeps our Sailors and troops safe and it’s something that we need to maintain and advance.”

The Kepler Spacecraft is a “planet-hunting telescope,” said Karpenko, designed to hunt space for earth-like planets rotating other stars. During its time in space, two of Kepler’s four reaction wheels that create the stability necessary to point accurately have surpassed their life span. The spacecraft is still operational, but with two less reaction wheels, researchers now have several interesting questions, some of which Kinzbrunner and Argenziano may help answer.

“The main objective of my thesis is to determine the pointing accuracy achievable at various possible science attitudes with the remaining two reaction wheels,” said Kinzbrunner. “In order to support this objective, different models of the Kepler solar torque disturbance will be compared to each other and empirical data.”

During Kepler’s original mission it was able to confirm 978 planets in the Cygnus constellation. Now with its limited capabilities, discoveries are being made on how to reappropriate the craft. “Before the reaction wheel failures, Kepler had already completed its original mission,” said Karpenko. “But, since Kepler still has two functioning wheels we can ask questions like, what can we do now with this spacecraft and its remaining fuel and capabilities? How can we minimize the amount of fuel we are going to use in order to prolong and extend its life expectancy? Or, is it possible to conduct science operations without using any fuel at all?”

While holding the spacecraft stable to observe the Cygnus constellation, Kepler’s reaction wheels wind-up to counteract the natural force that comes from solar radiation and other disturbances that exist in the space environment. This stored energy needs to be released or dumped periodically, which is one of Kepler’s greatest energy expenditures.

“Based on initial simulations,” said Argenziano, “it seems that there could be more efficient ways of momentum dumping than are currently being employed. By using an optimal control algorithm, and applying different constraints to the model, it is possible to determine the best way of inserting or removing momentum from the reaction wheels and end up pointing the satellite in the desired direction. This in turn can save a significant amount of fuel.”

During the process of finding efficient methods of momentum dumping and means to stabilize the satellite with its two remaining wheels, Karpenko’s students are also looking at similar ideas for future space missions.

“I am hoping the optimal control algorithms we are developing [at NPS] will be applied to new satellites coming out in the field,” said Argenziano. “The application of optimal control for the K2 mission of Kepler has made some discoveries within momentum dumping that if this is applied we can significantly save on fuel that is being used.”

The available energy in the space environment, such as the solar radiation pressure, can also be considered as an energy source in order to assist the spacecraft in some of its operational maneuvers. Karpenko considers this idea, which goes against the conventional wisdom, to be a vital discovery that may impact future space missions.

“If it’s possible to redefine the standard operations using some of the ideas that students are working on at NPS,” said Karpenko, “it is conceivable that we can prolong mission life by using less fuel as we become more efficient. That translates to improving the science return of a satellite. It’s a significant amount of dollars to build and launch a spacecraft such as Kepler. So by saving fuel, we can keep that satellite operating longer. It’s not the reduction in the cost of the spacecraft, but the extra time that we can keep producing science, that translates to savings.”