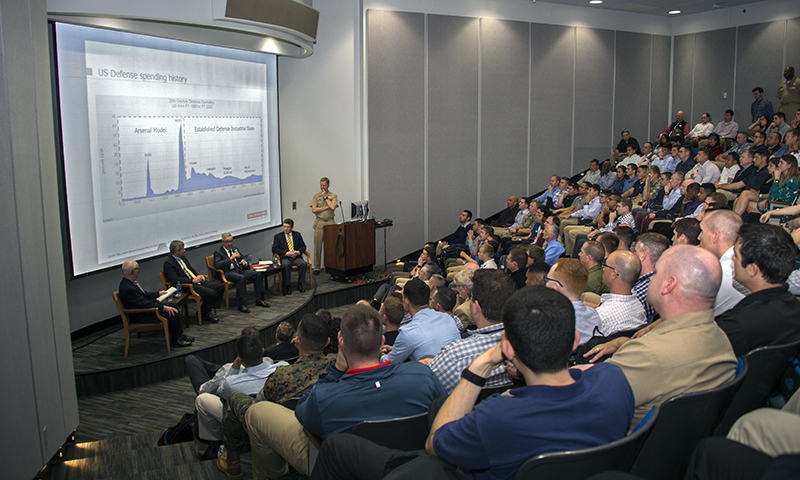 NPS faculty are joined by the chief executive officers of two of the nation’s largest defense contractors for a candid discussion on industry’s perspective on major naval acquisition programs, Aug. 16.

NPS students showed up in force to get insight first-hand from some of the defense industry’s most senior leaders during a panel discussion with university faculty, Aug. 16. The NPS Department of Systems Engineering hosted the discussion, with President and CEO of Huntington Ingalls Industries Mike Petters and President & CEO of BAE Systems, Inc. Jerry DeMuro, offering their unique perspectives on the history and future forecast of shipbuilding and acquisitions for the U.S. Navy.

DeMuro began the discussion by emphasizing some of the unique aspects of the defense industry.

“Aerospace or defense in particular operate in a very unique environment,” DeMuro said. “It is not truly a commercial market driven environment, and as you all know, all markets are unique in their own way.”

DeMuro leads BAE Systems Inc., an international aerospace security company that provides a range of products and services for air, land and naval services. DeMuro discussed the government’s decision to rely on the private sector for the development of complex systems that would require sustainment over several years, and the impact of decreasing federal budgets on these systems.

“If you look at 2010, we were spending a little less than five percent GDP, and that has implications on our industry. It’s very cyclical,” he noted. “This also drives behaviors in our business ... We have to be prepared for the up, and more importantly, for the survival of the down.”

Petters opened his discussion by offering a framework for the students in attendance to consider while participating in the discussion.

“I would like to give you a lens to look through for our discussion today,” he said. “The business we are in, the stakeholders we work with, we’re going to come to a complex problem and look at it through a lens of investment and return. How much do we invest in that problem, how do we create return?

“Return can mean a lot of things,” he continued, referring to growth, long-term sustainability, higher margins and investment capabilities among others. The federal government, he says, looks at acquisition programs through budget and expense, “which is a very different lens,” Petters continued.

Petters is CEO of Huntington Ingalls Industries, America’s largest shipbuilding company. He offered an example through the Virginia Class submarine program, demonstrating how reviewing acquisition programs through an incomplete ‘lens’ can be an inaccurate measure of effectiveness.

NPS’ resident undersea warfare chair with 36 years of active duty, Ellis took the opportunity of the Virginia Class discussion to have a conversation on lessons learned, especially for the upcoming Columbia Class submarine program.

“The Virginia Class program is widely considered one of the most successful ship building programs ever. What key principles of this program could you apply to other shipbuilding programs?” he asked, referring specifically to the Columbia Class. “There is no doubt that this program has to be successful for the survival and preservation of our great nation.”

Petters noted several advantages through the Virginia Class that can be applied to other programs, from establishing business arrangements at the beginning to developing an acquisition ‘rhythm.’

“There are so many things to have to go right for the first ship of a class to go well, and we can talk about that all afternoon,” he stressed. “If you really want to drive success of the Columbia Class in production, make sure you fully invest in the engineering up front and don’t delay it, don’t slow it down, don’t find your suppliers too late, don’t start the process too late, because all of those things will have an adverse impact when you finally get to the point where you are appropriating money for ships.”
Categories Navigation
NPS Departments/Academic Groups
Schools
Type
News Archive TodayatNPS Title