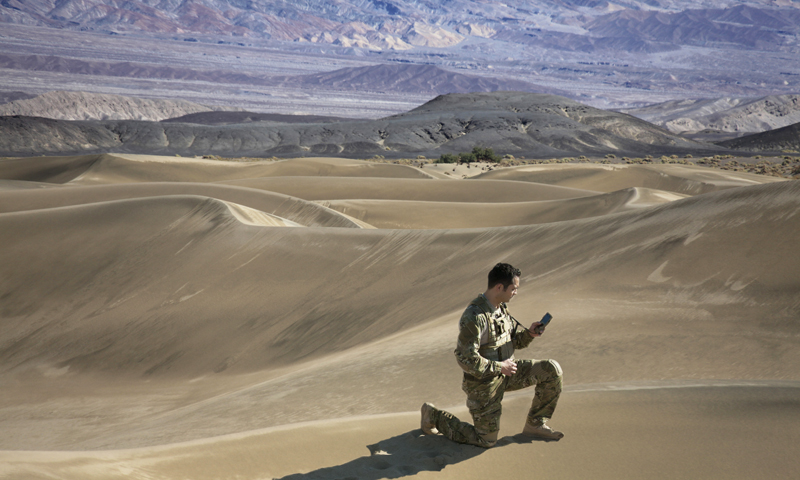 Army Special Forces Sgt. 1st Class Christopher Linnel demonstrates the Lighthouse Sensitive Site Exploitation application he developed through his studies in the NPS defense analysis program. The app provides a platform for the collection and rapid analysis of intelligence data, and is currently in pilot field-testing.

A CH-47 Chinook helicopter lands at a remote compound in Southern Afghanistan. Dust flies, Soldiers dismount, the tension is almost palpable. Before the team looms a series of seemingly medieval walled compounds – there are no house numbers, streets are more wishful thinking than reality, and each building may conceal rogue, extremist forces committed to acts of unimaginable violence.

These rows of mud and brick structures were once designed to protect Afghan families from rival clans, but today, they can also be used by anti-Afghan forces to launch attacks upon coalition troops and Afghan Security Forces.

U.S. Army Special Forces Sgt. 1st Class Christopher Linnel of Phoenix, Ariz. is no stranger to the walled compounds of Afghanistan, he recently led a team of Special Forces operators trained in the art of Sensitive Site Exploitation (SSE) in Regional Command South. Now he is a student in the NPS Department of Defense Analysis (DA), and is working on a mobile device application that promises to make the scenario described above safer and more efficient.

Linnel and his team have developed an application that they call Lighthouse SSE. As its name implies, the app utilizes the Lighthouse intelligence analysis methodology developed in the DA department’s Common Operational Research Environment (CORE) Lab.

The inspiration for the project was born of right out of Linnel’s operational background, when he says he became increasingly frustrated after watching hard-won intelligence get filed away and forgotten.

“The idea first came to me back in 2009, when I was deployed to Kandahar and partnered with the 3rd Commando Kandak in Regional Command South … One of my responsibilities was to manage SSE after a village had been cleared,” said Linnel.

“After the mission, I would spend about three hours consolidating all of the pictures, reports and information gathered off the objective,” he continued. “After I’d present the information, I’d get a, ‘great job,’ and the information would go nowhere.”

Special operations teams are commonly given the secondary task of moving through a maze of compounds after their primary task of clearing has been completed.  Their mandate is to gather the myriad clues that help ground commanders make sense of their areas of operations.

Linnel’s application attempts to simplify the process of site exploitation by giving context to the plethora of pictures, faces, documents and reports born of complex operations.

"This is about enabling analysts to rapidly connect the dots and better inform decision makers," said CORE Lab Co-Director Army Special Forces Col. Greg Wilson. "The ability to rapidly exploit this type of information can enable us to get inside the enemy’s decision cycle."

“A visual Rolodex for Afghanistan is one of the many by-products Lighthouse SSE produces,” added Linnel. “I take a photo, it is geo-referenced, and metadata is stamped on it with relevant information about the search and the organization that produced the report.”

The application is ran on an Android OS-based mobile device and connected to a tactical network via a wave relay radio system.

“By using the wave relay radio, you are able to update on the move and share information in real-time, lending context to people moving around on the ground as well as the command and control element back at the Forward Operating Base,” said Linnel. “This application allows analysts to see things through the operator’s eyes.”

"Terrorist networks are quick to adapt after strike operations with the evidence found on targets often fleeting in nature,” said Wilson. “Sgt. 1st Class Linnel's work promises to have a significant impact on our ability to rapidly gather, fuse and exploit the right information."

By capturing data in real time, analysts are able to not only receive, but to push information forward to operators in the field. This sort of two-way sharing of information may help prevent the misidentification of suspects and reduce the need for subsequent missions.

The methodology that Lighthouse SSE employs was tailored to provide uniformity to the data, helping analysts disrupt clandestine organizations and reveal dark networks.

“I kept it under the Lighthouse umbrella so that you can do things like link and social network analysis, which is made possible by the structured data captured on the Lighthouse SSE platform,” said Linnel. “When you begin to apply advanced analytical methodology to the exploited intelligence from the objective, you begin to see networks and their vulnerabilities.”

The first version of Linnel’s application will transition to pilot field-testing in early March. Subsequent versions will exploit advances in 3-D modeling with the goal of creating a device that is capable of molding individual photographs together to develop a complete model of the structure inside.

“In the future we will be able to stand up photos within the application to create a 3-D model that will enable our teams to plan operations, and will help us detect anomalies within the structure of buildings, like hidden rooms and caches,” said Linnel.

If successful, Lighthouse SSE will permit analysts to see through the fog of war and define the human terrain in a manner that ultimately saves lives and removes bad actors from the field.