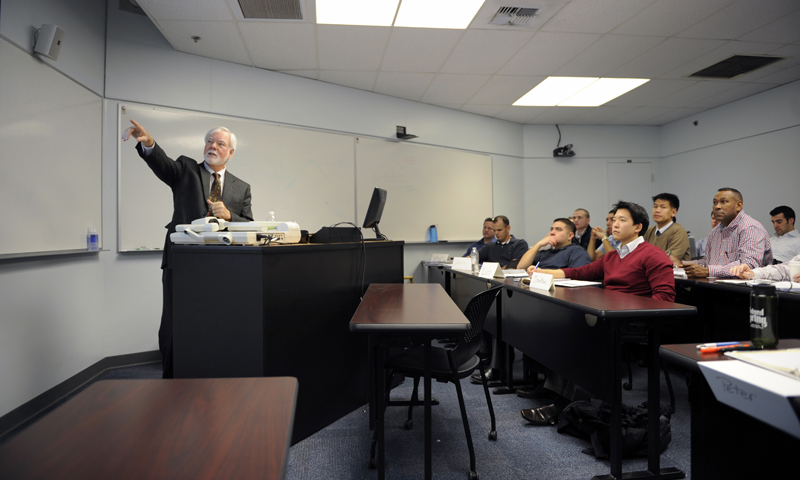 Former Under Secretary of the Army Nelson Ford visited GSBPP students, Jan. 18, for a special guest lecture on the federal budget. The class also took part in a budget simulation where they were challenged to explore ways to reduce federal debt.

If there is one thing that most Americans can agree is a concern at this point in time, it’s the federal budget. And if anyone is paying attention to the impact that budget cuts will have on the Department of Defense, it’s the men and women tasked with managing the resources and manpower that make up the department.

As part of a guest lecture by former Under Secretary of the Army Nelson Ford, students in the Naval Postgraduate School’s Graduate School of Business and Public Policy class titled “Defense Budget and Financial Management Policy," were presented with a simulation for exploring how to actually reduce the federal debt.

“We are studying the broader fiscal context in which the defense budget operates,” explained NPS Professor Douglas Brook. “This simulation gives the students an opportunity to try to stabilize the national debt by making complex spending and tax choices.”

Leading a two-day classroom exercise, Ford shared with students the grim reality of the federal budget, noting that issues like social security and health care must be addressed if reasonable solutions to the budget crisis are to be found.

“The military budget is a large portion of the discretionary budget, which means we are one of the first ones to be looked at when it comes to identifying cost saving measures, cuts and reduction in benefits,” said Marine Corps student Maj. Petra Seipel. “But what many fail to see is that most of the cuts in defense spending will not be enough to offset the shortfalls in the mandatory spending. The decisions that were posed within the simulation exercise made it clear that to balance the budget we need to look at the underlying laws that make our expenditures higher than the revenue we take in.” 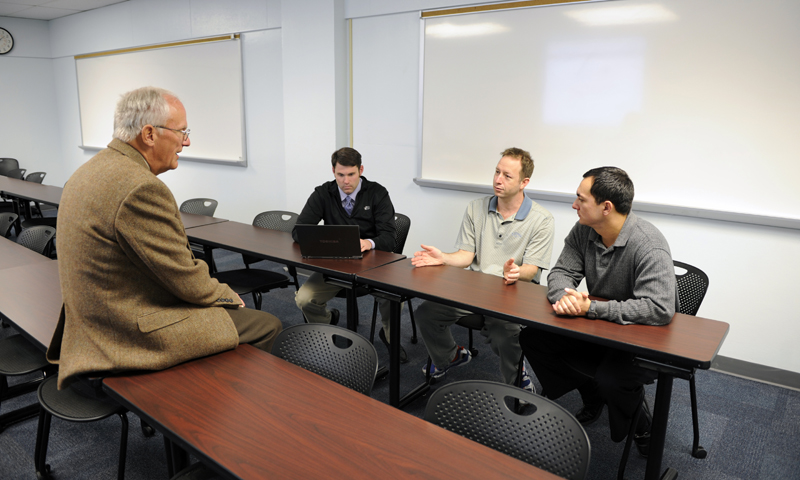 Students in the Defense Budget and Financial Management Policy class discuss with Professor Douglas Brook possible ways to reduce federal debt, a conversation sparked by a debt-reduction simulation the class worked through.

Ford presented students with an online budget simulator by the Committee for a Responsible Federal Budget, and tasked students with proposing how to reduce the national debt to 60 percent of the Gross Domestic Product by 2021.

“Mr. Ford's budget simulation exercise was eye opening and demonstrated how difficult it can be to come up with consensus on what should be funded and what should not. Even within our small group … we could not agree on some of the cuts we should make to balance the budget,” said Seipel. “At the same time, because we were all service members, we wanted to preserve ‘our entitlements’ as best we could.

“It quickly became obvious why it is so difficult to balance the budget,” she continued. “Each group, which is in danger of losing its funding, will try hard to preserve it at someone else's expense.  And so the question of who should take the cut remains largely unanswered because nobody wants to lose what they perceive as their entitlement.”

The simulation explores spending categories such as defense, health care, social security and tax expenditures. Having worked in both the public and private sectors, Ford has a good idea of the management and resource challenges that await the class of future military and civilian leaders he was addressing. Prior to serving as under secretary, Ford was the Assistant Secretary of the Army for Financial Management and Comptroller. Today, he serves as President and Chief Executive Officer of consulting firm LMI.

“What I hope that the students take away from the class are three big ideas,” said Ford. “The first is that we are borrowing a trillion dollars a year and, if we don't stop, we'll wreck the economy and the country. Second, you can't solve the problem with cuts in defense and other discretionary spending because it only represents 30 percent of the total spending. And lastly, you have to make major reductions in entitlements and reduce tax expenditures to achieve fiscal stability. And their generation needs to lead the charge to make this happen.”