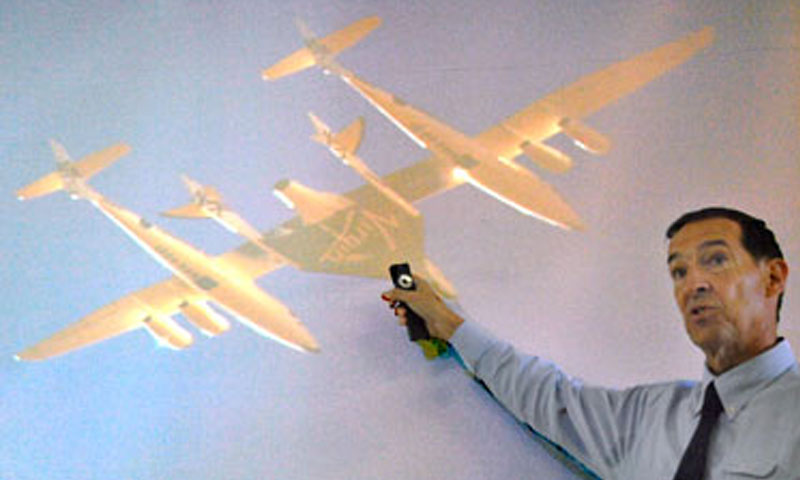 Pilot Brian Binnie shares a photo of SpaceShipOne and mothership White Knight during his lecture with students, faculty and staff on July 22.

In an exciting follow-up to the visit with Aviator Dick Rutan in April, the Point Lobos Section of the American Institute of Astronautics and Aeronautics presented a lecture with SpaceShipOne pilot Brian Binnie in late July. For his visit with NPS staff, faculty, students and visitors, Binnie shared the history of private space flight, and the direction that it is headed into the future. A retired pilot turned astronaut who secured the $10 million Ansari X-Prize in 2004, Binnie started his career with 20 years as a Naval Aviator.

On October 4, 2004, Binnie took off from Mojave, Calif, aboard the sub-orbital SpaceShipOne to break the world record by reaching an altitude of 367,442 ft. Guided to a safe launching altitude by the mothership White Knight, SpaceShipOne took eight years of planning and designing by renowned aerospace engineer Burt Rutan and his company, Scaled Composites. Rutan, known for building lightweight and durable aircrafts, also designed the record-breaking aircraft, the Voyager, which made the first non-stop flight around the world without needing to refuel. Scaled Composites has consistently pushed boundaries and sought to make the unbelievable feats possible in air and space flight.

“I feel very fortunate to have met up with Burt Rutan. I liken him to the “King of Dreams,” said Binnie. “He simply came to the realization that if he didn’t go after it himself, it wasn’t going to come to him. He is the master of thinking for himself, and thinking outside the box. He is willing to learn and willing to question experts on their own turf. Burt Rutan is successful because he is not afraid to try, and with that he is not afraid to fail.”

Binnie spoke about the challenges of creating a sub-orbital craft that could leave and re-enter the atmosphere while carrying the weight of three passengers. While a single hatch door on a NASA space shuttle can cost more than the entire $20 million budget for the SpaceShipOne project, the design team worked tirelessly to come up with a way of securing the shuttle with a door that cost only $200. Costly details like those, Binnie noted, will be the difference between NASA space flights and private industry in that construction costs are significantly lower for crafts like SpaceShipOne, without sacrificing safety or efficiency.

Winning the X-Prize proved to be only the beginning for Burt Rutan and Scaled Composites, who are now working with Virgin Galactic and Richard Branson on developing SpaceShipTwo, a project that Binnie is also involved in. The new project hopes to expand upon the small, three-passenger model of SpaceShipOne to create a six-person shuttle for commercial civilian space travel. A ticket aboard future flights of SpaceShipTwo currently go for $200,000, with a $20,000 refundable deposit required to be added to the flight waiting list. Binnie noted that although still in the development phase, sub-orbital flights available to the public are just the beginning of what he sees as a lucrative and promising future for space travel. 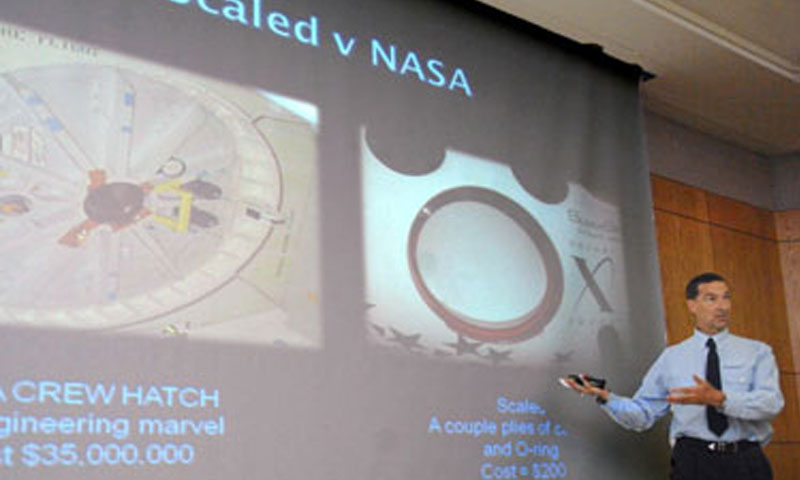 SpaceShipOne pilot Brian Binnie breaks down the cost differences between a NASA shuttle flight and a flight aboard a sub orbital craft built by Scaled Composites.

“My predictions are in five years, there will be competing sub-orbital space lines to take you to experience space. In 10 years, your grandchildren will know that they can go to orbit in their lifetime if that’s something that they want to do. That has really not been an option to date. And within 15 years, once you get to orbit, there will be a destination that you can hang out at for a day or two if you so choose. In 25 years, it might be as affordable as any other exotic vacation might be.”

With the growth taking place in the commercial space industry, the need has arisen for more space ports to be established around the world. Virgin Galactic is working closely with countries like Scotland, Sweden and Saudi Arabia.

As the commercial space industry blossoms, the interest in space travel has flourished as well, and created the need for more space ports throughout the country and around the world. Spaceport America, still under construction in New Mexico, has a 20 year lease agreement with Virgin Galactic and will be the future home of White Knight Two and SpaceShipTwo.

As the commercial space industry develops, the once distant notion of average citizens traveling into space is now within reach. Naval pilots like Binnie are proving it’s possible to take an hour and a half long trip into space and experience the view of earth from 69 miles above.  Binnie recalled his flight aboard SpaceShipOne as he secured the Ansari-X prize, and the feeling of wishing that more people could experience the sensation of weightlessness, and the vastness of space. He echoed the sentiment of Astronaut John Glenn who, while aboard the space shuttle Discovery, said, “To be able to float around in zero-g, I just wish everybody could experience this. The view is so hard to describe. It’s moving, it’s emotional, when you see the curvature of the earth.”