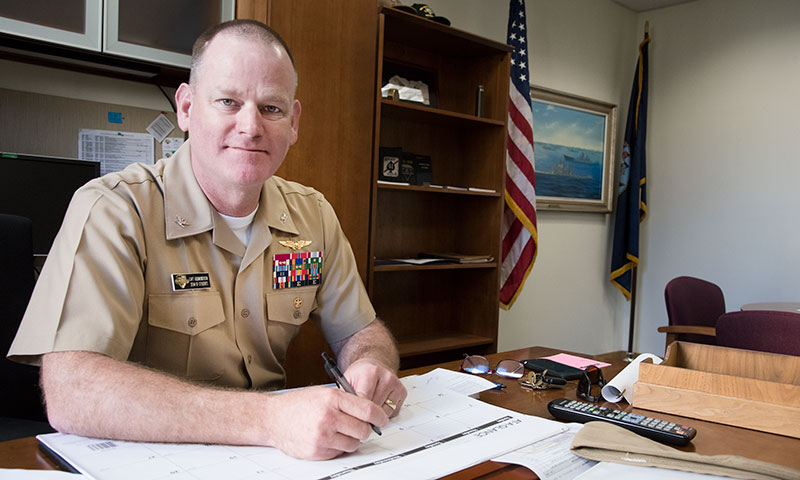 U.S. Navy Capt. Markus Gudmundsson has officially assumed the duties of NPS Dean of Students. A career aviator, Gudmundsson takes the helm from Cmdr. Paul Rasmussen, who returns to his role as deputy.

Since his arrival on campus this week, Gudmundsson says the turnover of duties, meetings and information has been rapid fire, something he has come to expect as a Naval Flight Officer.

“What I do know about this job is that I will represent the student body, and ensure our students improve their academic background with the intent of returning them to the fleet as stronger officers,” said Gudmundsson. “I look forward to playing a supporting role in their pursuit of graduate education.”

Gudmundsson is already hard at work, familiarizing himself with NPS’ unique academic structure, its programs and its people. Through a non-stop meeting schedule, he’s already had the opportunity to meet several academic and administrative leaders across the campus while also getting to know his own team in the university’s Student Services Office.

“We have a phenomenal team in the Student Services Office running a complex shop. It’s really neat to see them work, and I have a lot of catching up to do,” Gudmundsson added.

Gudmundsson says he is a firm believer in NPS’ robust educational programs, and is looking forward to getting out on campus on a regular basis. He may even sit in on a few classes as part of his learning the job.

“I had several officers in my last squadron who attended NPS, and also had officers who returned from other higher education military universities,” said Gudmundsson. “I value and appreciate the critical thinking they bring to the operational and tactical environment.”

Although Gudmundsson was never a student at NPS, he has first-hand knowledge of the university’s reputation during his time on campus in the Aviation Safety School, once housed on the Monterey campus, and more recently through NPS’ Center for Executive Education. He’s also a big fan of the Executive Master of Business Administration distance learning program through the Graduate School of Business and Public Policy, uniquely “tailored to our aviation community,” he adds.

After many years of working in a tactical environment, Gudmundsson was scouting for a job that could provide a new set of challenges, and saw the NPS DOS position as a great opportunity.

“When I saw the billet open up for the DOS position at NPS, I really wanted the job, but I first had to wrap up my tour as Commodore, Commander, Strike Fighter Wing, U.S. Pacific Fleet,” said Gudmundsson. “Cmdr. Rasmussen was willing to bridge the gap, so I’m very grateful to be here.”