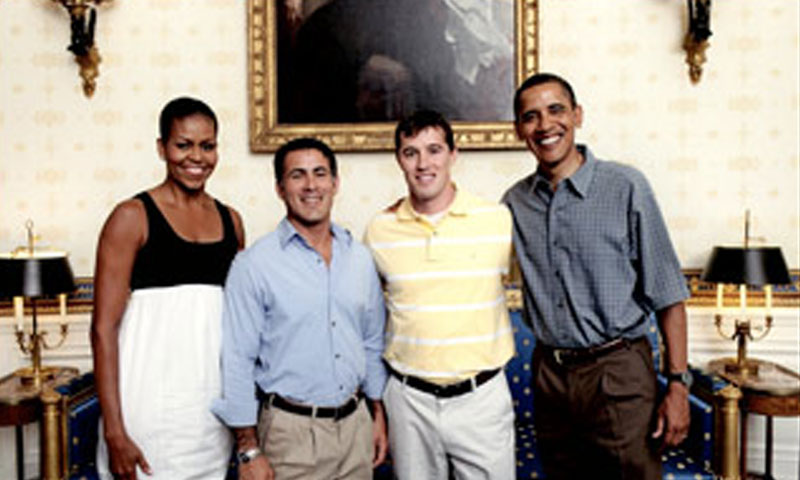 What seemed like a typical Fourth of July celebration – a barbecue with friends and family, entertainment and fireworks – was in fact a once-in-a-lifetime opportunity for Naval Postgraduate School (NPS) student Lt. Trevor Ritland, who celebrated the holiday this year with President Barack Obama on the White House South Lawn.

In honor of the men and women of the armed forces, the White House hosted a traditional July Fourth barbecue and invited a number of service members and their families to join the President in the celebration.

Additionally, 19 military members, representing all five services, received special invitations to meet with President Obama at the event. Ritland was one of four members of the Navy selected for the honor.

Ritland, who has received three Bronze Stars for his work in Iraq as an Explosive Ordnance Disposal (EOD) officer, was nominated to attend the event by his former commanding officer of EOD Mobile Unit-2.  While in Iraq, he worked closely with Army Special Forces, whose missions included targeting and detaining terrorists, and transferring them to the Iraqi court system. As an on-site explosives expert, Ritland led a team that inspected and verified weapons caches and explosives.

Now a dual-degree graduate student at NPS, Ritland is studying Operations Analysis and Business Administration, and he is expected to graduate next year.

“It was a nice surprise,” Ritland said of the invitation to join the Commander-in-Chief on the Fourth of July. “I know there a lot of other people in the military who have worked hard and are doing great work … so it was very humbling,” he added.

At the event, Ritland not only had the opportunity to meet with the President, but also a chance to tour the White House and stand with President Obama as he delivered a speech thanking the troops and their families.

“My time with the President and First Lady was brief, but they were very nice,” Ritland said.  “The President expressed his gratitude and said he appreciated everything we’ve done for the country.”

In addition to a barbecue picnic, the Fourth of July celebration featured private performances by singer Michelle Branch, the Foo Fighters and comedian Jimmy Fallon. The evening concluded with a viewing of Washington D.C.’s fireworks from the White House lawn, which Ritland described as the best seat in the capital.

“The experience was a lot of fun,” he added. “And it was great to be there with a lot of amazing people who have done some very courageous things in both Iraq and Afghanistan.”