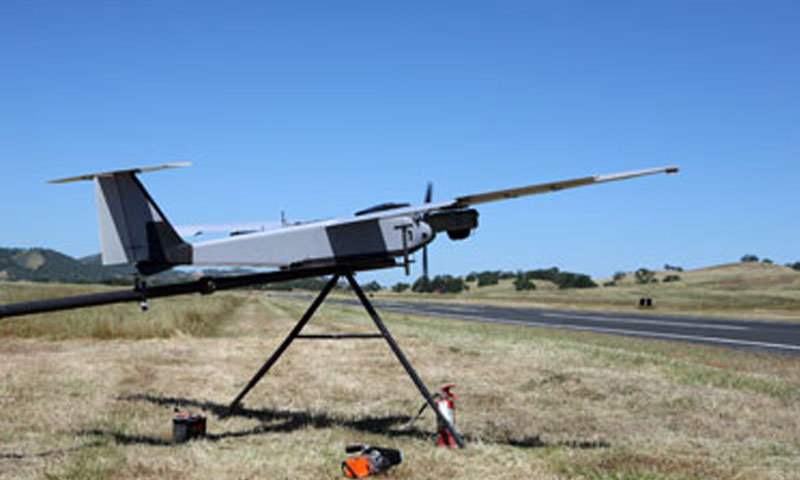 As part of the continuing research collaboration between the Naval Postgraduate School (NPS) and the University of Alabama in Huntsville, students and faculty conducted experiments with a self-guided precision airdrop prototype during the Tactical Network Topology (TNT) experiments at the McMillan Airfield in Camp Roberts, Calif. in April 2010.

The U.S. Special Operations Command sponsored project, titled Snowflake, is being developed in order to provide precision airdrops completely autonomously in order to minimize risk to personnel in a cost efficient way.

“The idea is that no special operations soldier has to be put at risk, we can use an autonomous vehicle to carry the package forward and drop it without having to get soldiers in and out,” said Information Sciences Associate Professor Ray Buettner, Director of Field Experimentation at NPS.

“One of the things that we’re looking at with Snowflake is to deliver ground robots using the air systems,” Buettner noted, citing just one application of the system that the TNT team is researching.

Other applications for Snowflake are being explored by different institutions, some as simple, but nonetheless as important, as supplies.

“Another advantage is resupply,” said Buettner. “When troops are in the field and we’re trying to resupply by air the difference between 25 meters accuracy and 50 meters accuracy determines how quickly the supplies can be replenished.”

Snowflake is essentially a guided payload that mounts under the wing of an Unmanned Aerial Vehicle (UAV). It drops to deliver supplies, sensors, tools or myriad other materials troops need on the ground. The payload is attached to a rectangular parachute called a parafoil that allows Snowflake to steer in the direction needed to accurately hit its landing zone. The parafoil is manipulated by control lines powered with electric motors that can either pull down on one side or the other somewhat like an airplane wing.

“Essentially while snowflake is flying down under the parafoil canopy, it can turn itself left and right to hit a precise landing zone,” said Snowflake lead student Cmdr. Charles Hewgley, an NPS Ph.D. student in the electrical engineering department.

The NPS prototype was developed by Aerodynamic Decelerator Systems Center (ADSC) director and Snowflake lead NPS professor Oleg Yakimenko, working in cooperation with professor Nathan Slegers of the University of Alabama in Huntsville.

Slegers designed the autopilot that Snowflake uses, a system of integrated GPS, accelerometers and gyroscopes, and a barometric altimeter that allow it to not only sense where it is, but also how high it is. Said Hewgley, just like airplane instruments, it can sense all that information.

“It’s autonomous, it sends some information to a ground computer but most of the information it just uses in its own guidance algorithm,” Hewgley noted.

Hewgley adds that Snowflake’s complex system of sensors and technologies extends beyond self-guidance.

“These days, Snowflake is naturally integrated into the Tactical network environment at Camp Roberts, serving as a node of the mobile ad-hoc network,” Hewgley added. “An operator can send commands to the Snowflake autopilot from anywhere in the world, and can assign and reassign landing target coordinates, and monitor the mission in real time.”

Hewgley adds that these network advances are compliments of NPS’ Center for Network Innovation and Experimentation (CENETIX), led by professor Alex Bordetsky. Eugene Bourakov, lead engineer with CENETIX, has added a sophisticated networking capability to Snowflake.

All of these clever provisions allow Snowflake the precision required for it to do its job. In fact, precision is also part of the project’s name although it’s subtly hidden in a bit of Russian folklore.

“Dr. Oleg Yakimenko’s wife Tatiana came up with that name and it has to do with an old Russian children’s tale about a little bear that has snowflakes land on the tip of its nose,” said Hewgley. “That’s how accurate we want it to be.”

With this in mind, at last quarter’s week-long field experiments at Camp Roberts, Snowflake had some of its best trials ever.

“We did eight drops, the closest one hit within three meters of the target,” said Hewgley. “We’re getting a lot better considering we drop these things from 3,000 or more feet above the ground.”

The precision comes from its guidance algorithm, the set of instructions that Snowflake is going through to make decisions on such as which way to turn.

“Another thing that it’s doing in flight is that it’s trying to get an estimate of what the wind is doing,” said Hewgley. “The problem is Snowflake doesn’t fly all that fast. A really strong wind could actually push it back. What Snowflake tries to do while descending is to position itself so that it will definitely reach the landing zone even with strong winds.”

Hewgley goes on to explain that Snowflake flies in a box pattern while it’s descending and before it makes the final run at the target. Flying one leg almost completely into the wind and one leg almost downwind averaging out its speed to estimate what the wind speed is.

“Like a landing pattern that an airplane would do at an airport or an aircraft carrier,” said Hewgley, “it flies down wind and then does a turn and it tries to make that final turn to landing up wind into the target.”

To test Snowflake in a different environment, the team participated in the Army-sponsored Precision Airdrop Technology Conference and Demonstration (PATCAD 09) held at Yuma Proving Ground where systems of all sizes where tested – from the smallest (Snowflake) to the largest, a 35,000-pound platform carrying a military truck dropped under an enormous guided parafoil.

“It was a great experience to participate down there, I think we did very well,” said Hewgley. “We were one of only two groups that was actually dropped from a UAV.”

The use of a UAV, according to Hewgley, was preferred for two reasons: to demonstrate and use a cost-efficient autonomous delivery of Snowflake, and because of logistics and availability. 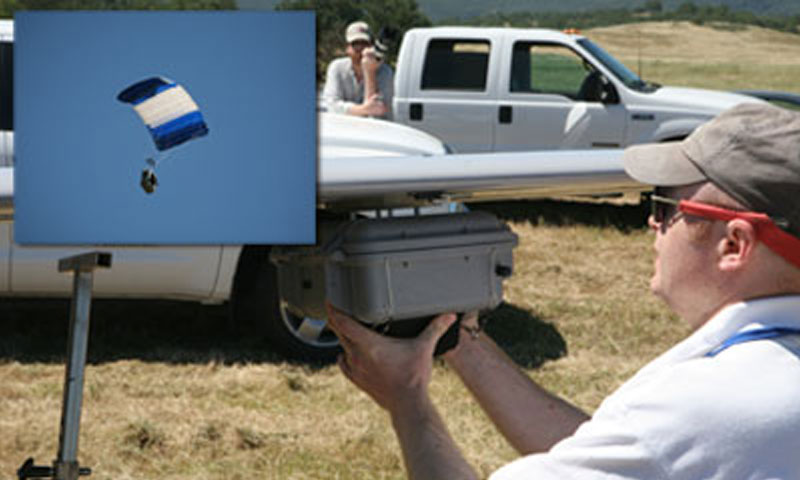 Researchers mount the Snowflake precision airdrop prototype to the wing of an Arcturus Unmanned Aerial Vehicle prior to field-testing during experiments in Camp Roberts, Calif. Once released, shown inset, Snowflake’s sensor package and parafoil allow the prototype to autonomously self-guide the payload to a precise landing zone.

“We have backup hand controllers just in case the parachute doesn’t open,” said Hewgley. “We can send it a ‘parachute open’ command so it doesn’t just plummet down to the desert floor.”

The capabilities of the UAV gave Yakimenko the idea for the concept of a ‘blizzard’ project in which numerous Snowflakes could be mounted on a UAV to be dropped around the same time.

“The UAV has enough weight capacity to carry about 12 Snowflakes,” said Hewgley. “If we could make the cases really small they could fit in the UAV like books in a bookshelf.”

The UAV also provides a logistical advantage because of its availability on a short notice and its modest requirements for coordination.

“In PATCAD a lot of the other payloads are being dropped out of C-130s and C-123s or helicopters,” said Hewgley.  “It takes coordination to get those types of manned aircraft, but for us with the UAV, it’s very simple and convenient. We usually do four or five flights a day and we have more time to see it in action.”

As for the future of Snowflake, Hewgley would like to see snowflake glide beyond resupplying troops in the field and more towards the sea.

“In my mind delivering cargo to a fixed spot on the land, is something that’s being done now,” said Hewgley. “I think what our experiments are doing is opening our eyes to additional applications that we haven’t even thought of yet. I would like to do some experiments to see whether this could be a method that could be used to supply ships underway.” The idea would be to have an autonomous package that flies in and lands on the helicopter deck of a destroyer underway as a way to provide just about anything: mail, critical parts, ice cream, or real, high priority stuff that maybe can’t wait till the next underway replenishment, said Hewgley.

“A lot of people say it can’t be done, getting accurate enough to land on a moving platform,” said Hewgley. “Well that’s why we’re here at school to experiment with some of that stuff and see what’s possible and what isn’t because right now we don’t know. I would like to move into some maritime applications with this, what can the Navy get out of this? The Army is already seeing the benefit but I want to see what the Navy can get out of it.”