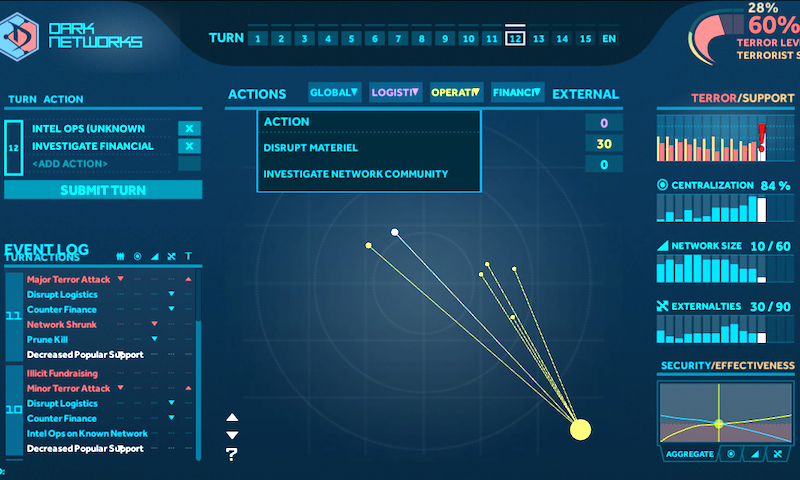 The state actor modifies its network to maximize detection of attacks in this screenshot of NPS Global ECCO's Dark Networks game, one of several Serious Games developed at the university that have been recognized for their ability to re-enforce complex concepts from the classroom.

Beneath the starry night, you look down upon a residential compound in the suburbs of Abbottabad, Pakistan, wherein dwells the militant Islamist responsible for a series of horrific terrorist attacks around the world. He is your target.

With a pinch of your fingers, and a turn of your head, your gaze shifts in towards the ground. At your direction, two four-man teams slide stealthily towards the compound with surprising speed, awaiting your next command. They breach the wall, surprise the adversary, and with a computer-generated ping, eliminate the sentries positioned along the narrow passageway.

But then, the guards you didn’t know were there open fire. Half your teammates immediately go down, and the other half become embroiled in a bitter firefight. If only you had devoted a bit more effort into intelligence collection ahead of time …

But that’s the point.

The notional scenario is actually a game entitled SpecOps. It’s a virtual reality experience designed to demonstrate, first-hand, the principles retired Adm. Bill McRaven elucidated in his seminal 1995 book “Spec Ops: Case Studies in Special Operations Warfare Theory and Practice.” Based on his 1993 612-page thesis at the Naval Postgraduate School (NPS), the book has become a lodestar for the special operations community in practicing their craft.

“The idea was to gamify some of these principles,” said Dr. Michael Freeman, NPS associate professor in the Defense Analysis (DA) department and lead for the Global Education Community Collaboration Online (ECCO), the program developing the game.

The game begins, however, with a series of choices based on what McRaven called principles of relative superiority ... essentially, the qualities of a successful special operations raid. Players make a limited number of investments in surprise, speed, training, simplicity and intelligence – and with multiple play-throughs, can tangibly experience the trade-offs between the choices they make in their quest to obtain relative superiority.

“It’s great if you can go in with a lot of surprise, a lot of speed and all the training you need, but what happens if you don’t?” Freeman explained. “How does the mission play out differently if you have a lot of intel and you know where everybody is, but you have no surprise, or vice versa?”

Turned into a single-player virtual reality game only last summer, SpecOps is still a work in development, but the computer-based version of the game has already been successfully used to teach McRaven’s principles in the DA department’s History of Special Operations course (DA3880).

And it’s the latest example of how GlobalECCO strives to take experiential learning to the next level.

Founded in 2009, Global ECCO serves as a nexus for counter-terrorism students and professionals, and utilizes a suite of strategic games to explore new ways of thinking about a range of related topics, including asymmetric warfare, cyber operations, counterinsurgency and social network analysis.

SpecOps breaks new ground in these endeavors, marking Global ECCO’s first foray into the virtual reality real. Drawing on a rich history at NPS, the MOVES Institute has been a vanguard in virtual reality technologies for more than 30 years.

“It was a good investment to push the boundaries of where we could go and see what could be done,” Freeman said.

Games like SpecOps challenge NPS students to engage subject matter in creative ways that reinforce course materials in a manner beyond traditional teaching methods. Unlike rote or didactic learning, experiential learning is not passive in nature: by being involved in decision-making, students are intimately immersed in content.

The U.S. military has a long history of using games to prepare, understand and even plan for conflict. The military’s earliest use of wargaming dates back to 1883, when Maj. William R. Livermore used topographical maps to practice the art of war. Livermore’s work was itself based on Kriegsspiel, a tabletop game the Prussian military had used since 1812 to train its officers.

Such gaming, however, is not just “beer and pretzels.” Serious games, which academic literature refers to as gamification, are played to stimulate creative thinking, decision making and problem solving. Good gamification allows players to synthesize new knowledge and make critical judgements.

“These games are strategically interactive; there’s no right way to win,” Freeman explained. “You have to understand what your opponent is doing, what you’re trying to do, and how your opponent is going to react. Peoples’ minds are literally more engaged.”

The value of experiential learning is becoming increasingly recognized across academia: industry analysts expect the game-based learning market to reach $3.5 billion in 2018 and $17 billion by 2023.

It is not the end-all, be-all of education, Freeman noted, rather an excellent way to supplement instruction.

“At NPS, we could just put a lecturer or professor up on a stage and talk, but even if it’s something new and innovative, it’s just not as effective,” he said. “But if there’s something that’s better pedagogically for the students, we should always be pushing the envelope in trying to provide the best education we can.

“Games are not going to replace a lecture, but they are going to make it that much more powerful,” he added.

Global ECCO’s game Dark Networks is another example of a serious game successfully being used to augment an NPS curriculum.

Two players, red vs. blue, an insurgency and a nation state, vie to establish or destruct a terrorist network. Over the course of 15 simultaneous turns, each player conducts a range of potential actions which either further their goal or counter their opponent’s.

The terrorist player elects to grow or shrink, centralize or decentralizes its organization, perpetrate attacks, garner public support, or gather necessary resources. The state, with minimal initial visibility over the enemy network, must choose between denial of resources and public support, killing or capturing key targets, or increasing its security presence to mitigate the effect of terrorist attacks.

“The state has to make decisions about how much or how to act under uncertainty,” Freeman explained. “For the terrorist, there’s a trade-off between the effectiveness and the security of the network: the things it can do to be more effective and win the game are also the things which will make it less secure and more vulnerable.”

“Dark Networks plays with this balance,” he continued. “There’s no right place for the network to be in terms of its structure; it all depends on what the player is trying to do.”

In the end, if the state is sufficiently able to disrupt the opponent’s network, it wins; if it fails to do so, the terrorists win. Either way, both players walk away with a deeper understanding of the key concepts of social network analysis (SNA): nodes and links, and the importance of size, centrality and external ties.

SNA is a methodology used by analysts to explore social relationships between individuals and groups, and visually represent them to make complex data sets more readily discernable. It’s also the subject taught by NPS DA professor Sean Everton, upon whose book, “Understanding Dark Networks: A Strategic Framework for the Use of Social Network Analysis,” the game is based.

“A few years ago, [Everton] and I were talking about presentations he had the students give at the end of class where they had to devise a strategy for defeating a given network,” Freeman recalled. “That’s great, but what then? That’s the top of the first inning, the first offensive drive for a football team; how will that strategy play out once the enemy adapts to your strategy?”

“So we said, ‘Wouldn’t it be better if we made this into a game? It would make sense: here’s this great material to build a strategic lab to play with these concepts,’” he continued.

Freeman and Everton then brought the idea to the University of Southern California’s Institute for Creative Technologies (ICT), and the Dark Networks game was born. Since then, it’s been employed as a learning tool through several SNA courses and at other DOD schoolhouses.

“Dark Networks breaks up the class and provides students with a change of pace from learning the details of SNA,” Everton said. “More importantly, it helps reinforce important concepts that we cover in the class. It is so easy to get hung up on mechanics when learning a quantitative approach for analyzing dark networks ... This game offers students to focus more on the concepts and what these might mean for disrupting dark networks.”

The game’s success reaches beyond the NPS classroom, though.

When the results were announced, Dark Networks was awarded a silver medal.

“This shows that we’re doing something pretty innovative at NPS,” Freeman said. “A lot of people don’t really understand these types of games, equating them to playing casual games like Battleship or chess, but serious games are a huge deal.”

“I think it shows that NPS is always trying to improve and innovate in how we educate our students,” he said.