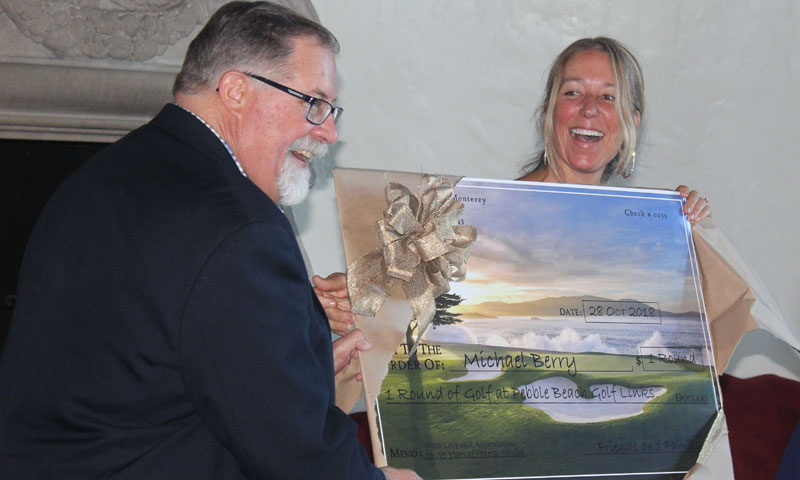 Michael Berry is surprised by safety specialist Holly Rose with a huge “check” representing a free round of golf at Pebble Beach during a farewell ceremony in his honor. Berry officially retired after 40 years of federal service, Dec. 31.

During his 40-year federal government career, Michael Berry went from tax examiner to radiological technician to occupational safety and health (OSH) officer. The bulk of his varied career occurred at the Naval Postgraduate School (NPS) beginning in 1993. He pursued the NPS opportunity after he learned the shipyard where he worked would be closed .

“When the Mare Island Naval Shipyard announced the closure, the boss said, ‘You may not realize it today, but someday you will see yourself in a better place.’ Boy, was he right,” chuckled the ever-affable Berry.

Before the shipyard closed, Berry was there to provide reactor plant safety oversite to more than 20 submarines and ships. He ultimately elevated to the positions of radiological controls foreman and supervisory industrial hygienist. During that time, he led the successful conversion of the Navy’s first nuclear powered submarine, the USS Nautilus (SSN-571), into a museum exhibit.

“That was a highlight of my career,” said Berry. “I was responsible for ensuring the general public wouldn’t be exposed to the hazards of ionizing radiation. Pretty funny considering when I applied for the Mare Island job, I had no idea the Navy had nuclear-powered submarines,” said Berry who calls Prairie Village, Kansas his hometown.

By the time he reached NPS, safety was a way of life for Berry and his family.

“Yes, my kids learned at an early age I always took safety into consideration for everything they did, especially when my daughter was in high school and had a boyfriend with a motorcycle,” he laughed.

In 2010, the responsibility for OSH shifted to installation management with the establishment of Naval Support Activity Monterey (NSAM). During his NSAM tenure, Berry and his safety specialists led the way for significant mishap reduction, from 37 mishaps the previous year to 13, which resulted in the installation receiving the “2014 Secretary of the Navy’s Award for Achievement in Occupational Safety and Health Ashore.”

“It’s incredible for a commanding officer to have the commitment, expertise and dedication for one’s job. That is the embodiment of Mike’s service. He literally creates a family atmosphere in his work place. I will miss the times sitting on his couch discussing all things, many not even Safety Department related. Michael will be missed by all but especially by me,” Wiley said.

Born with a rare form of hereditary muscular dystrophy, Berry took a year off from college to have extensive surgery to rebuild his feet that were afflicted by the neuromuscular disease. He said personal adversity motivated him throughout the years.

“Being disabled like that has provided me significant insight understanding the concerns affecting individuals in the work place. It has given me the personal motivation to do the best I can with what I have. In some ways I’m a better person because of it,” Berry added.

With all the talk of safety awareness, Berry does not shy away from speaking of a personal safety violation that undid the work of the orthopedic surgeon some four decades earlier. A former Boy Scout turned Scoutmaster, Berry broke his own safety rules.

“I was hiking at Andrew Molera State Beach when I slipped on some gravel. My foot hung up on a rock and all my weight went down on it,” he said, recalling the painful event. “There I was, all alone. I thought I’d crawl and that didn’t work. I ended up walking and pretty much destroyed the foot and all the surgery. It was foolish on my part,” he said, advising hikers to never hike alone.

As he prepares for his retirement days ahead, Berry looks forward to more time with his family, camping, reading, writing and completing home improvement projects. A farewell gift from coworkers checks off a bucket list event.

“As I’ve spent so much time watching the AT&T Pro Am Tournament and then volunteering at the tournament I’ve dreamed of playing the course for some time. The fact that friends and colleagues generously donated to the cost of a free round at Pebble is a testament to the quality of the relationships that have been cultivated over the years. The thing I’m going to miss most in retirement are the good people that are employed at this installation. I sincerely appreciate the opportunity to work with so many wonderful people and the gift is treasured,” Berry said.

Family, friends and colleagues joined Berry for a farewell event in October where they presented him with a gigantic “check” for a round of golf at Pebble Beach. With his official retirement date of Dec. 31 now passed, Berry just may have the opportunity to “cash in” on that free round.