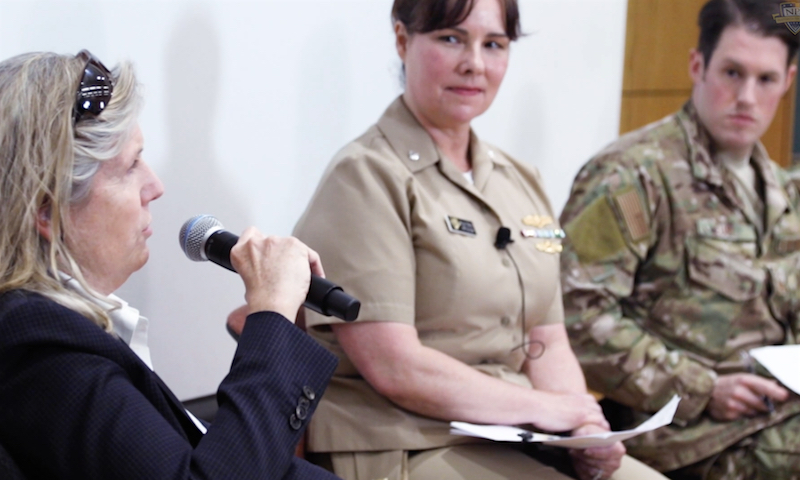 The NPS President’s Board for Student Affairs hosted the university’s first Women’s Leadership Forum (WLF) at the Mechanical and Aerospace Engineering Auditorium, May 31. NPS students, faculty and staff took the opportunity to take part in a candid discussion about the opportunities and challenges facing female leaders in the military community.

“Diversity makes us stronger and there aren’t many opportunities to make this type of event happen,” said U.S. Air Force Captain Jessica Padoemthontaweekij, a student in the Security Studies program and event organizer for the WLF. “I think it’s very important for us, especially for NPS students who are going to lead in their service — whether it’s Air Force, Navy, Army or Marine Corps. Making this opportunity available for students is important not only for the school but for their own self-progress.”

“There are roles for both men and women to support women in leadership positions, especially in society today where we need the support of men in higher leadership to bring us to the table,” continued Padoemthontaweekij. “Having men and women who are in senior positions see that they have an active role in promoting women and their growth in leadership is one thing I would like everyone to take away from this event.”

“I am privileged as the president of this university to be here, because you are all dedicated to the diversity that will lead to innovation, and innovation is what will keep this country’s freedom and democracy safe,” said Rondeau. “Because in the end, it's about the dignity to the individual and understanding that he or she actually brings to the fight.”

Padoemthontaweekij opened the panelists’ discussions about the role of women in leadership in a male-dominated community.

Working more than 20 years in journalism and the Department of Defense, Donnelly said that she built trust. Serving as Senior Advisor to former Secretary of Defense James Mattis, Donnelly recalled that the Marine Corps valued initiative and aggressiveness regardless of gender.

“I think women in the U.S. military have a unique opportunity to challenge that misperception of being quiet and looking pretty in a really determined way,” said Donnelly. “I think the initiative and aggressiveness you display every day is as important as how you live it in your leadership roles.”

“Overall, our goal should be to be as blind to gender as we are to color, race, and creed and for people to be viewed in the merits of what they bring to the fight,” added DeRoush. “I think that the military does a better job of that than many places across the U.S., and building these teams and being able to value everyone’s point of view is something that we worked pretty hard for.”

Travis also understood the importance of serving as an example to others.

“Ten years ago, I was challenged with a retention study,” said Travis. “It found that women were getting out of the military community because they had no example of senior females who had a marriage and had children. At that point, my introverted mindset shifted and pivoted towards a higher purpose. Even though I’m not perfect, I have a responsibility to make myself available so that everyone—male and female—can get one perspective of what it’s like.”

As women take on more leadership roles, the panelists were asked how they could maintain leadership despite potentially getting labeled as bossy or other negative connotations.

“There have certainly been times that I have been called cold and less nice things for the way I approach a situation” said DeRoush. “Being able to very carefully read a situation and knowing the right level of emotion to display certainly helps you because you maintain both that level of professionalism and humanity.”

“Strive to overcome being emotional or bossy,” suggested Travis. “Shoot for consistency instead. Be consistent with how you handle situations, how you interact with people, and with who you are as an individual. Also, strive to add value to others and produce results. Finally, have faith that the people are worthy of you spending your time and their consideration. They will notice who you are and will notice your abilities.”

When asked opinions about the perception that women are more emotional than men in the workplace, Eudy contended that emotional tones are often set by the leader, rather than the leader’s gender.

“Everyone in this room outranks me, so I look to you for how you’re going to set the tone in the situation,” said Eudy. “As I watch commanders—both male and female of all ranks and services—when they’re at a ceremony or they’re with family, they may cry while they’re leading the formations behind them. We understand that it’s an appropriate time to show emotion when the commander is the first to cry. … This is what right looks like for the formation and it’s not just to cope with loss, but for times of jubilation and celebration. You leaders are setting the standard for that and everyone else will follow suit on how that emotion is portrayed and accepted within your formation.”

The WLF concluded with a questions and answers forum with the audience, and goals for the discussion to continue.

“We would like to have the forum on a more regular basis,” said Padoemthontaweekij. “We would like to have more men and women attend, and as panelists, and we’d like to reach out to the local community and local leaders as well. We hope that with time, they’ll be more students, faculty and staff attending as participants or panelists.”