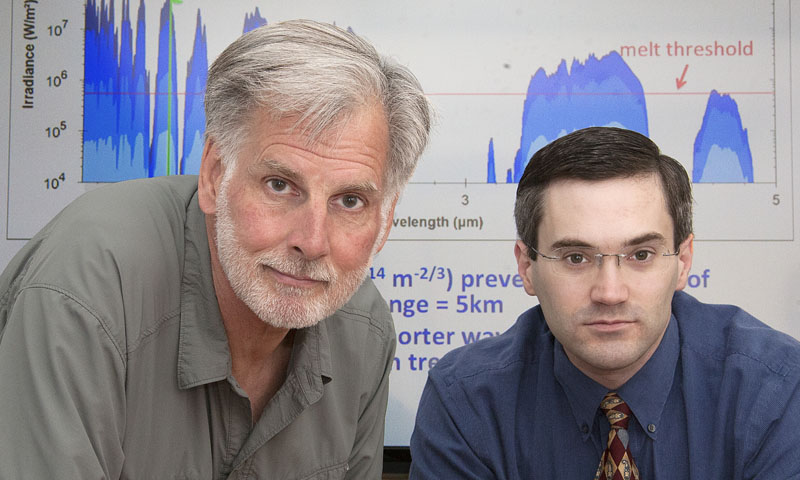 NPS Distinguished Professor of Physics Dr. William B. Colson, left, and Research Assistant Professor Dr. Keith Cohn co-advised on the student thesis of Ens. Chris Fussman, whose efforts led to the development of an all-new model to evaluate the performance of solid-sate lasers through varying atmospheric conditions.

“[Briefing Pentagon leadership] was an extremely positive experience,” said Fussman. “I had never stepped foot inside the Pentagon before, let alone briefed a senior-level member of the Department of the Navy.

“My research dealt with the effects various weather conditions may have on a laser beam as it propagates to its target,” Fussman continued. “[NPS Research Assistant Professor of Physics Keith] Cohn and I implemented the mathematical models for these principles into a computer program in order to quickly evaluate how well a laser may function in a wide range of varying atmospheric conditions, such as turbulence, wind, fog and rain.”

For many years, the Navy has shown a keen interest in High-Energy Laser (HEL) weapons. That interest is spurred in part by recent demonstrations of high-power lasers successfully engaging aerial drones in a maritime environment. It is also due to continued naval research into economical systems that are less vulnerable to traditional logistic challenges.

“As all-electric weapons, HELs have deep magazines, and their precise, rapid delivery of energy onto targets make them advantageous over kinetic weapons in many instances,” said Cohn, who served as co-advisor on Fussman’s thesis.

Last year, NPS was involved in a related study that focused on solid-state laser power systems like the one employed by the USS Ponce, the first ship in the fleet to be outfitted with an HEL.

Deputy Assistant Secretary of the Navy for Research, Development, Test and Evaluation Mary E. Lacey believes that the time is right to explore laser technology.

“Lasers are a game changer for the Navy, but with every game changer, we have to figure out how to best utilize the new technology.

“Often when these technologies are tested, they are pitted against ideal scenarios, but the Navy does not operate in an ideal world,” said Lacey. “I have been funding Fussman and his fellow researchers at NPS so that they can put the science together and see how actual weather will affect the laser and other shipboard systems.”

To evaluate the viability of solid-state lasers in all weather conditions, Fussman and Cohn had to evaluate millions of different weather parameters and map out the laser’s performance in these conditions. That task proved difficult using existing models.

“Before any new weapon system can be built and operated, the technology has to be extensively modeled and its behavior simulated using various computer software programs. This is to make sure that the weapon will function as desired once it’s actually built, and that millions of dollars aren’t wasted on faulty technology,” said Fussman.

“There are two things new here, the code and the study … We had to write the code to be able to conduct the study,” said Cohn. “There are commercially available codes that you can use to estimate the performance of a laser system, but these codes tend to be very slow.”

The code developed by Fussman and Cohn is called the Accelerated Naval Code for High Energy Laser Optical Propagation, coined ANCHOR for short. Using ANCHOR, Fussman and Cohn were able to demonstrate that concerns about solid-state laser performance in adverse weather conditions were overrated.

“We were able to show that the weapon is still useful despite the weather,” said Cohn.

Specifically, Cohn and Fussman were able to demonstrate that the notion that solid-state lasers are binary weapons, capable of only working in optimal weather conditions, is false.

“The research was very well received, and I think it offers insight into just how capable laser weapons could actually be for offensive and defensive roles given the wide range of operating conditions one could see on a naval vessel out at sea,” said Fussman.

NPS Distinguished Professor William B. Colson served as Fussman’s senior advisor. Colson pioneered NPS’ HEL program, and points out that misconceptions concerning the capabilities of solid-state lasers are not limited to the U.S.

“It is of interest that a few months ago a Chinese general came out saying just what Ms. Lacey wants to counter, that the directed-energy weapons that the U.S. is working on are not going to work if there is a little bit of haze or smog,” he said.

Colson notes that Cohn and Fussman’s work shows that misconceptions like these are not founded in science. And while certain kinds of weather does affect the range of HELs, these weapons remain viable against many targets at these reduced but still useful ranges.

Lacey, whose office also funds NPS’ Department of Systems Engineering, notes that it is realizations like those made by Colson, Cohn and Fussman that make the work that occurs at NPS so critical to the future of naval operations.

“NPS and its faculty are there to ensure that our officers have a technical understanding of the military problems of the future,” said Lacey. “When we put officers into NPS, we are preparing them for what war is going to be like in 10-20 years … I am interested in funding the curriculum of the future.”