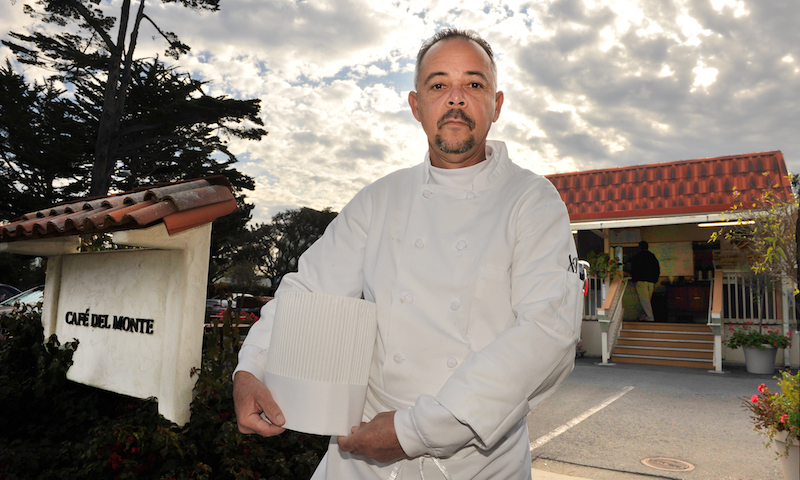 NAVAL SUPPORT ACTIVITY MONTEREY (MAY 1, 2019) -- Chef Loveday Camille will celebrate his 19th year with the Club Del Monte, now in a new role as Executive Chef. He will fill that position in addition to his duties managing the popular Café Del Monte near Dudley Knox Library.

“I love what I do. Taking care of people, that’s important,” said Camille, who one day in April worked 15 hours straight to produce a 400-guest wedding reception in the Barbara McNitt Ballroom. From wedding receptions to the monthly Corkz and Forkz to Sunday brunches, it seems Camille has been preparing for his new position since he was a boy in Seychelles, an archipelago country in the Indian Ocean.

“I grew up in the business, my mom and dad had a restaurant and bar. They taught me if you make your staff happy and take care of them, it comes back around to make your business successful. That’s how I was raised,” Camille said.

After a stint in the Army, Camille decided to join his family who had relocated from Seychelles to San Jose, Calif. After a variety of jobs, he made the leap from executive chef at a Carmel Valley retirement home to the Hotel Del Monte. He eventually moved into the food service arena, creating the Café Del Monte in 2003.

“In the beginning, we only served cold sandwiches, soup, hamburgers and cold salad. We built the Café Del Monte from the ground up,” said Camille.

Old-timers and new arrivals have heard the Café Del Monte moniker, “Love Shack,” for many years, after a suggestion it should be renamed in honor of Camille’s first name, Loveday.

“A professor told me when I first started working at Café Del Monte that my name fits so well with the place we should rename it the ‘Love Shack,’ after the old B-52s song,” he jokes.

The legend of the Love Shack has crossed time zones through the international travels of its customers.

“After 9/11, a group of students had to leave school early to deploy. During his travels one of the guys came across someone who had orders to Monterey, he told him to make sure to look for the chef at the Love Shack for the best burritos,” Camille said.

So, one day, a customer asked to see the chef, who was working in his office. Never one to shy away from a visitor, Camille met with the customer.

“He told me the story of meeting someone who told him to come see me. I bought him a burrito,” Camille said. “I like to mingle with the customers and thank them for their service. Those people are on the battlefield to serve our country, I respect that. I’m here to provide them with great food and great service because that’s what they deserve,” Camille said.

With 19 years onboard, it seems Camille gets what he deserves in his new executive chef assignment.

“Chef Loveday is very deserving of this new role with Club Del Monte. We look forward to having Loveday lead our outstanding culinary team in support of NSA Monterey,” said Kyle Rhodus, Quality of Life Director.

Moving forward, there are changes ahead for the Café Del Monte, according to Rhodus.

“We expect to break ground on a replacement for Café Del Monte later in the year that will include indoor and outdoor dining, a meeting room, and the same great daily specials our guests have come to expect,” Rhodus said.