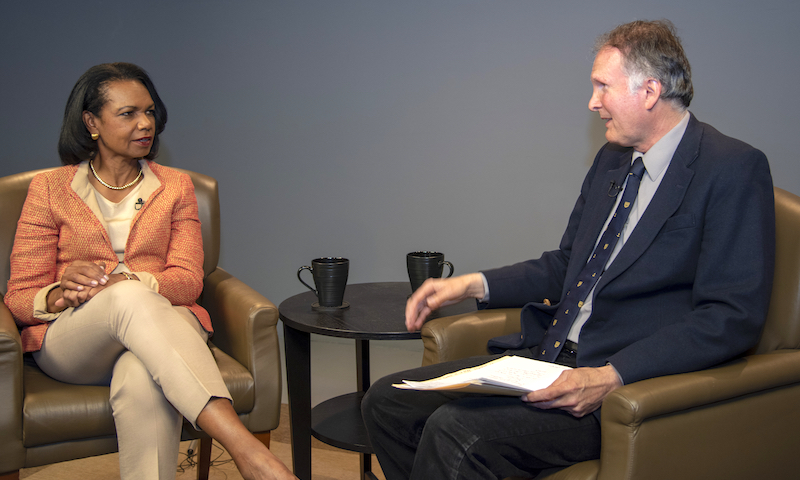 Stanford University’s Dr. Condoleezza Rice joins NPS’ Dr. John Arquilla for an intriguing discussion on Russia’s history of disinformation campaigns and how they have evolved over time. The 30-minute interview will serve as an introduction to this year’s Cyber Endeavour 2019, focused on Russian aggression in cyberspace, and how the U.S. and its allies can counter it.

Information warfare experts and practitioners from across government, industry and academia will assemble at SRI International’s headquarters in Menlo Park, Calif., to take part in Cyber Endeavour 2019 (CE-19), June 18-20.

An annual interactive, working-level conference, CE-19 provides an opportunity for leaders and operators in the field to take on the most critical challenges in the realm of information and cyber operations.This year’s CE-19 examines Russia’s aggressive use of the modern information environment to advance its disruptive strategies abroad, and how the U.S. and its NATO allies can respond.

“The idea is to bring experts, practitioners and policy people together so at the end of the conference they have a better idea of the threats posed by Russia and what we can do about it,” explained Dr. Hy Rothstein, director of the DOD’s Information Operations Center for Research (IOCR), located at the Naval Postgraduate School (NPS). NPS, along with the U.S. Army Reserve’s 335th Signal Command, are cosponsors of CE-19 with the U.S. European Command (USEUCOM) also “having a key role for obvious reasons,” he added..

Setting the stage for the conference, lead organizers Rothstein and Army Reserve Cyber Operations Group Chief Warrant Officer 4 Chris Manuel turned to one of our nation’s most prominent authorities on security affairs, and on Russia’s long history of disinformation campaigns. Stanford University’s Dr. Condoleezza Rice, one of the nation’s pre-eminent Russia experts and 66th Secretary of State, will provide a compelling introduction to the topic via prerecorded 30-minute discussion with NPS’own  Dr. John Arquilla.

Over the last eight years, the conference has become increasingly renown as a seminal symposium in the field, primarily due to its intimate size, content and participant engagement, Rothstein noted.

“There are a lot of conferences, but most of them are actually too large,” he said. “We keep it small to encourage dialog, and dialog is very difficult in conferences with hundreds of attendees.”

CE-19 is intentionally designed to maximize interaction at an unclassified level and therefore yield an unparalleled synergy in addressing so significant an issue. Panelists represent some of the most knowledgeable leaders in their fields, fostering meaningful conversation on challenging topics.

The conference doubles as a networking event, with breaks scheduled between presentations to encourage dialogue among attendees that often reach beyond the event. Says Manuel, an NPS Research Fellow from the Army Cyber Institute (ACI) at West Point, this is an invaluable component of the program.

“We’re trying to make people feel comfortable debating and there is definitely that feel about the conference,” he said. “One of the roles of the moderators is highlighting the differences between the panelists, and this helps us with the debate environment that we’re trying to create.”

This year’s conference is designed to examine the broader information environment, and to go beyond just the cyber realm, Rothstein said.

“The term ‘cyber’ by itself is not that meaningful: it’s a piece of the information environment, but not the whole of it,” he continued. “Cyber activities would be meaningless without being coupled with other actions that are needed to advance a country’s policy objectives. Russia knows how to use those things fairly well.”

The world has seen this time and time again. In 2008, Georgia in the Caucasus was struck with a crippling cyber offensive just weeks before the Russian invasion. Russian-affiliated hackers injected malicious, chaos-inducing codes across Ukraine in 2014 well before swarms of “little green men” entered the Donbass. Russian belligerence continues to this day throughout the Baltic nations, Europe, Syria and the United States.

The threat is real, and today’s headlines are riddled with examples of Russian interference in critical democratic institutions. Policy makers are keen to refine best practices to counter anticipated aggression, and CE-19 strives to cultivate this in forging critical insight into a very complex issue.

“We will look at the threat to democratic institutions because of the upcoming elections,” Rothstein observed. “But it’s also about what goes on in Europe: we’re not the only one being subjected to Russian propaganda, cyber attacks and information operations. The security interests of our closest allies are at risk too.”

The speakers and audience members at CE-19 will reflect this, with military and civilian practitioners and leaders throughout Europe in attendance – Germany, U.K., Austria, Lithuania, Ukraine and Estonia, for example.

They will be joined by Americans also deeply engaged in the fight, with senior officials from USEUCOM, U.S. Cyber Command (USCYBERCOM), U.S. Special Operations Command (USSOCOM), as well as ACI, various Pentagon officials, the Rand Corporation, Voice of America, Microsoft, practitioners in academia and beyond, all in attendance.

In addition to the conference program, Army Reservists from the 335th Signal Command will be engaged the five-day Cyber X-Games operational exercise directly ahead of the symposium, and will bring their takeaways to CE-19. Many of these men and women carry over their expertise from their civilian careers in the cyber or computer science fields

“We normally don’t have so broad a perspective, but I think it’s going to make the conference this year a lot richer, having all these perspectives on what the Russians are doing,” Manuel observed.

Of course, with NPS at the center of the event, the university can bring its most valuable resource to the table, its graduate students.

“We aim to align their follow-on assignments based on the research they’re doing, so when they go to their next assignment in Europe, they will be able to use what they learned at NPS and at the conference to really operationalize their thesis work,” he added.

Ultimately, Rothstein says, CE-19 is about understanding the strategies and tactics of our adversaries in this domain, where recent history has proven how high the stakes are, and what to do to protect our interests.

“It is important to understand how our opponents are using information in conjunction with other instruments of statecraft to advance their policy objectives and undermine our own,” Rothstein said. “The conference is about the exchange ideas,” Rothstein said. “We want all attendees return to their organizations better informed and prepared to do something about this serious threat.”

For more information about Cyber Endeavour 2019, visit the conference website at http://cyberendeavour.com/.