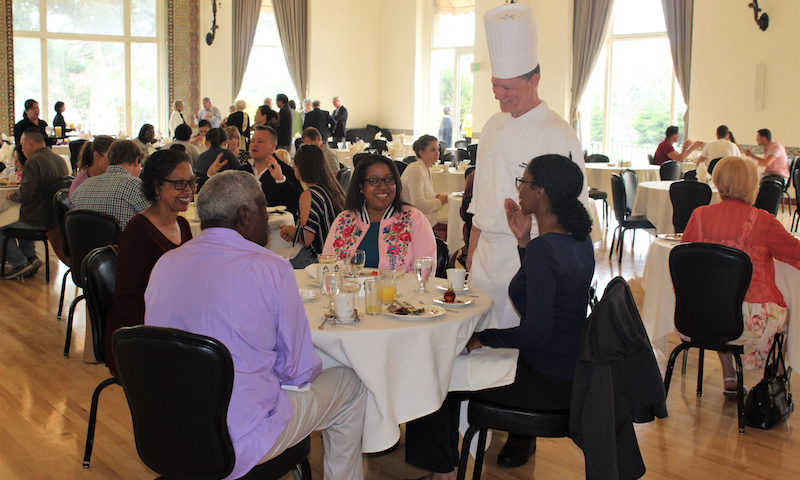 In an effort to share the historic hotel with the community, installation Commanding Officer Capt. Rich Wiley worked with the catering staff to open the doors to the general public.

“The Sunday champagne brunch at the historic Hotel Del Monte has been a long and popular tradition at NSA Monterey. We are glad to be reestablishing it,” Wiley said.

The ballroom served as the main dining room during the heyday of the Hotel Del Monte, beginning in the late 1880s.  When the Navy leased the hotel in the 1940s, it became the dining room for Navy Del Monte Pre-Flight School aviation cadets.

In anticipation of the introductory event, head chef Hugh Butler arrived in the kitchen Sunday morning at 6 a.m. to complete final preparations.  He was not disappointed in the reactions he received from brunch goers.

“All of the feedback has been positive,” said Butler as he visited diners at their tables. “They all liked the variety of food, from the waffle station to the roast beef carving station.”

Diners also filled their plates with made-to-order omelets, a wide assortment of pastries and desserts, smoked salmon, potatoes, and bacon. Many of the diners had booked their reservations weeks in advance.  For one couple staying at the Hotel Del Monte, their serendipitous timing found them at brunch.

“We feel so lucky to be here for the first brunch. What a great setting, very good food and a nice staff,” said retired Coast Guard Lt. Cmdr. Edward Zacharias. “We couldn’t ask for anything more.”

According to Mrs. Zacharias, the couple looks forward to Sunday brunch at the Hotel Del Monte again next year. “We will be back next year.  And I’m going to tell all my friends about it,” said Kathy Zacharias.

June 28, 2017
Summer Quarter's New Students Get Crash-Course in Everything NPS

June 27, 2017
NPS Triathlete Wins at All Navy, Moves on to World Competition