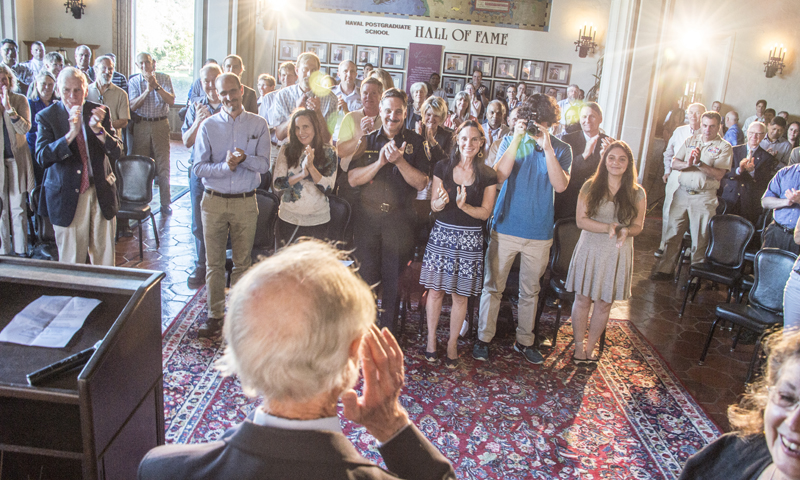 Family, friends and colleagues offer NPS Professor and longtime Space Systems Academic Group Chair Rudy Panholzer a standing ovation at his retirement ceremony on the Quarter Deck of Herrmann Hall, Sept. 27. Panholzer has been an iconic member of the NPS faculty for 53 years.

As a young man in his native Austria, Panholzer used to stand and look at an atlas of America where he would dream of finding a place across the ocean that combined his love for the sea and the mountains. He found that place, at least on the map, in California. But that young Austrian could hardly have anticipated the send-off he received in Central California more than a half century later.

In his typically self-deprecating manner, Panholzer expressed his gratitude for the many accolades heaped upon him and attempted to deflect some of the praise to his colleagues and staff.

“I’d like to meet the guy you are talking about. All of those accomplishments could not have been due to the work of one person - indeed they were not,” said Panholzer. “I am facing this transition with mixed emotions, with ‘one smiling eye and one crying eye.’”

But perhaps it was Panholzer’s son Gaudenz Panholzer whose emotional tribute to his father best summed up his father’s time at NPS.

“This place has been part of our family for 53 years. I remember going to his office and sorting wires, attending nursery school and spending summer days swimming in the pool here,” he said. “My father stayed because this place became part of our family.”

Panholzer agrees. When asked about his greatest accomplishment at NPS he did not cite the launching of satellites, or the creation, promotion and maintenance of six sponsored, externally-funded professorships or the partnerships he fostered with NASA and the German Armed forces. It was being a part of the NPS family and his contributions to it that he takes the most pride in.

“It’s not the projects or the labs. It’s the people. It’s the flood of people that I’ve worked with and who have touched my life,” said Panholzer. “NPS is just three letters … What matters is the people. There are a lot of ties that you cannot see when it comes to my family at NPS.”

Panholzer will become a professor emeritus and will not be giving up the office that he has occupied for the last 53 years any time soon. He insists that he still has a lot of work to do.

“I am not just going to fade into the background. As an emeritus there are several projects that I would like to see through to their completion … I would like to stay involved, to a certain degree, with happenings in space and with space engineering, especially our work with NPSAT1 whose launch was delayed for a year. I will definitely be there when NPSAT1 is launched next year from the Cape,” he said.

We wish him the best, “Onward and upward” Rudy!
Nav buttons

Today@NPS showcases some of the speakers, conferences, experiments, lectures, and other events that take place at the Naval Postgraduate School on a daily basis. If you would like more information about any of the highlighted activities please contact the Office of University Communications at pao@nps.edu.
September Title