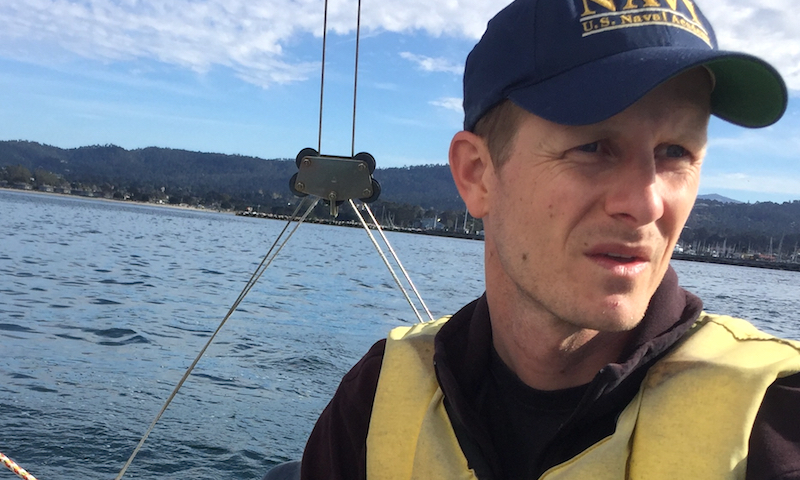 On the evening of March 18, NPS meteorology doctoral student Lt. Cmdr. Kyle Franklin was at the right place, at the right time, when he came to the rescue of local kayaker and Pacific Grove resident Brian Correiar who had been tossed out of his craft by a suspected great white shark.

"A loud bang came from beneath my kayak and I flew into the air and found myself outside of my boat," wrote Correiar on a local scuba diving website.

Franklin was out with his family for a leisurely, Saturday afternoon sail on the picturesque Monterey Bay with his wife and young daughter out for her first sail, when they saw something in the water. As they closed in, it became obvious it was a man frantically swimming away from a kayak, who then began waving at them with great alarm.

Franklin fired up the small, three horsepower outboard motor on his rented boat. As they approached Correiar, he and his wife saw that the kayak was being pushed and pulled by something … then they saw dorsal fins swirling in the water around the kayak. Just then, the dorsal fins disappeared into the water, and Franklin told his wife to use their cell phone to call 911 and the Coast Guard Station, although Correiar had already radioed using his marine rescue radio minutes before the family arrived.

Franklin tried to pull Correiar into their sailboat, but the kayaker says his adrenalin was fading, and feet were numb from the bitterly cold water. Minutes later, a 29-foot Coast Guard Response boat, stationed in Monterey Harbor, arrived ready to assist in getting Correiar onto their vessel.

U.S. Coast Guardsman Boatswain's Mate 2nd Class Petty Officer Anthony Longo was on duty that afternoon, and described what he saw of the incident.

"I received a mayday call over the station's radio at around 1700 on March 18, 2017. The call was from the immediate area, I was on our 29-ft Response Boat at that time," recalled Longo. "I could look out from the breakwater, where our boats are slipped, and I made a visual contact of an overturned kayak and a lone swimmer. I calculated the distance to be not more than 300-yards from the breakwater and we launched right away.

"When we arrived, a family in a sailboat had already been trying to pull the kayaker out of the water but he had trouble because he said his feet had turned numb," continued Longo. "I heaved a line to the kayaker, still clinging to the sailboat, and we pulled him into our vessel."

Back on shore, gouges, scrapes and scratches were immediately visible on Correiar's retrieved red kayak. In the end, Franklin says he simply went over to help what appeared to be an individual who had fallen out of his kayak. He says he is no hero, but was very happy to be in the area when the incident occurred.

"In retrospect, it doesn't matter if you're 200 miles or 200 yards from shore, what happened is a testament to having the right safety gear and training to be able to survive this kind of attack," Franklin said.

"While Correiar was in the water, I asked him questions to keep his mind occupied, I inspected his extremities and torso for wounds, and then I kept a paddle at the ready to fend off the shark should it return," he continued. "The kayaker did have a Nautilus radio transmitter on his personal flotation device, and he was wearing a 3-mil, neoprene wet suit that helped keep his body warm … Luckily, we were just there at the right time."

While Franklin may not consider himself a hero, Correiar would disagree. "I am certain that I would not have survived the attack if they had not responded to my waving of my arm as I swam away from the shark," he said. "I want to give them my deepest thanks for coming to my rescue."

Today@NPS showcases some of the speakers, conferences, experiments, lectures, and other events that take place at the Naval Postgraduate School on a daily basis. If you would like more information about any of the highlighted activities please contact the Office of University Communications at pao@nps.edu.
March 2017 Title