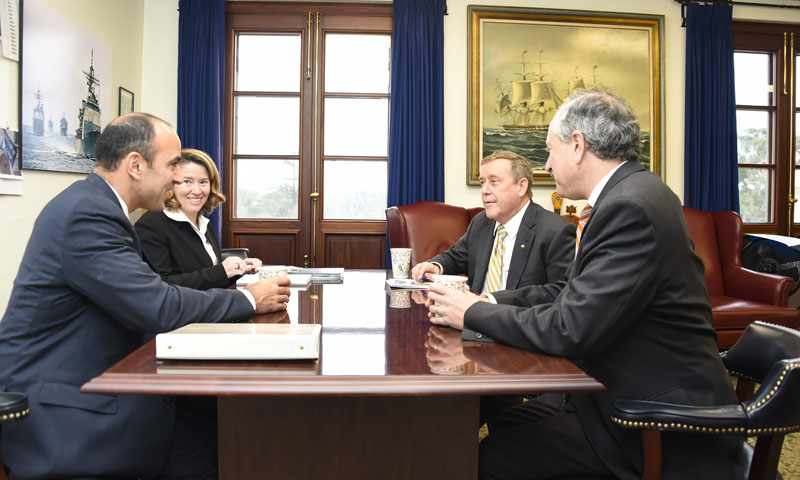 The Honorable James V. "Jimmy" Panetta, recently-elected representative for California's 20th congressional district, and his Chief of Staff Kathleen Lee hold an office call with NPS President retired Vice Adm. Ronald A. Route and Provost Dr. Steven Lerman, from left to right, during a campus visit, Jan. 18. The visit provided Panetta with an opportunity to hear first-hand about NPS' strengths and challenges as he prepares for his new responsibilities in our nation's capital.

"I want to know more about NPS and what it is that I can help with in communicating your role as an institution of higher education back in Washington," Panetta said.

During the brief, NPS leadership, academic deans and department chairs offered introductions to their respective areas, but all rallied their voices to a single point … NPS provides the DOD and the warfighter with one-of-a-kind educational programs and leading-edge research.

Dr. Mohammed Hafez, chair of the NPS Department of National Security Affairs, stressed that one of the university's key strengths is its high-caliber faculty.

"DOD sends NPS about a $100 million to operate, and the faculty give them back a $300 million institution," said Hafez. "The faculty leverage their expertise to earn external grants and funding to carry out cutting-edge research and generate innovations that benefit the Navy and DOD more generally."

As a native son of the Central Coast with several connections to the campus, Panetta told leaders about his two uncles who worked as busboys in the waning days of the Hotel Del Monte and as an annexed facility during World War II.

"I remember my family members telling me stories about the wonderful hotel grounds and the people they worked with in the old days. And my own memory of just a few years ago as a Navy lieutenant when I was presented the Bronze Star in this very room," said Panetta.

Panetta assumed his new role as congressman, Jan. 3. House Democrats selected Panetta to be a regional whip for northern California, the Central Coast, Hawaii and the U.S. Pacific Islands.

"You'll be seeing a lot of me around here," Panetta avowed as the meeting adjourned.