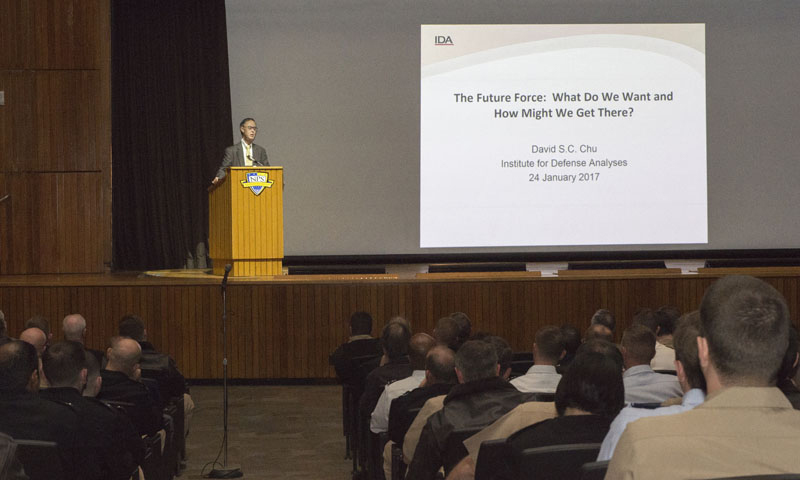 Dr. David Chu, President of the Institute for Defense Analyses, presented his views on the future military force to NPS students, faculty and staff during the latest Secretary of the Navy Guest Lecture in King Auditorium, Jan. 18.

“What future military force should the United States have?“ asked Chu, beginning his discussion with several questions for the students to consider. What would you propose for a future force, how might those forces be deployed, and what are the roles of other agencies in relation to the DOD, Chu posed.

“You will have a role in answering those questions in your future assignments,” he stressed.

Chu encouraged the students to learn from the successes and failures of the past, but to also be flexible enough to adapt to the changing security environment.

“What worked yesterday … might not work today,” he noted, offering recent history as a lesson learned. The U.S. has seen over the past 15 years that a force built for state on state warfare was not as well suited for the irregular warfare it was confronted with, Chu explained.

“Likewise, there is no guarantee that the new modified force will be right for the challenges we face tomorrow,” he added, pointing to conflicts in South China Sea, Russian aggression against Crimea and the Ukraine, cyber attacks, and violent extremism in the Middle East.

As President of the Institute for Defense Analyses, Chu directs the activities of more than 1,000 scientists and technologists, conducting and supporting research requested by federal agencies involved in advancing national security, and advising on science and technology issues.