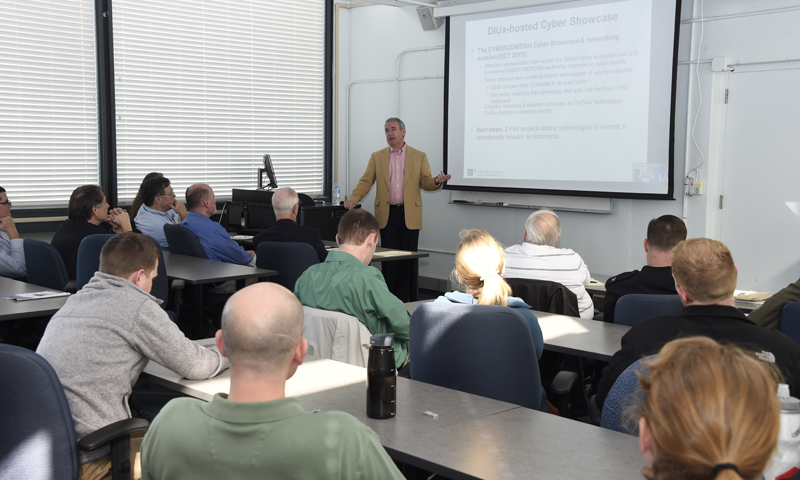 Director of Operations for Defense Innovation Unit Experimental (DIUx) Mark Gorenflo presents the latest Menneken Lecture to NPS undersea warfare (USW) students and faculty in Spanagel Hall, Jan. 28. The mission of DIUx is to build and maintain relationships, scout for breakthrough and emerging technologies, and serve as a local point of presence in the Silicon Valley for DOD.

"In order for the military to maintain its edge, it needs to tap into all areas of innovation in the United States," said Gorenflo. "Two to three decades ago, the Department of Defense could do that with its own organic assets such as NPS, Navy labs, Air Force labs, Army labs, and others … However, the Department of Defense (DOD) has been a victim of its own success since some of the technologies that we developed have migrated out into the private sector."

In April of 2015, Secretary of Defense Ashton B. Carter announced the formation of DIUx with the idea that a continuous presence in Silicon Valley would help increase the permeability of technology and ideas between the DOD and California's hub of innovation.

"One of the things that we [DIUx] are trying to do is to help with the requirements generation process and the acquisition process by bringing our customers to Silicon Valley to have them sit down with industry experts to help solve their problems," said Gorenflo.

"I think it's important for the military as a whole to interact with private corporations, because we can't isolate ourselves and rely on totally organic sources for innovation," said Hammerer. "Due to the various theses at NPS that are geared toward new and emerging technologies, a partnership with DIUx would be beneficial for both organizations."